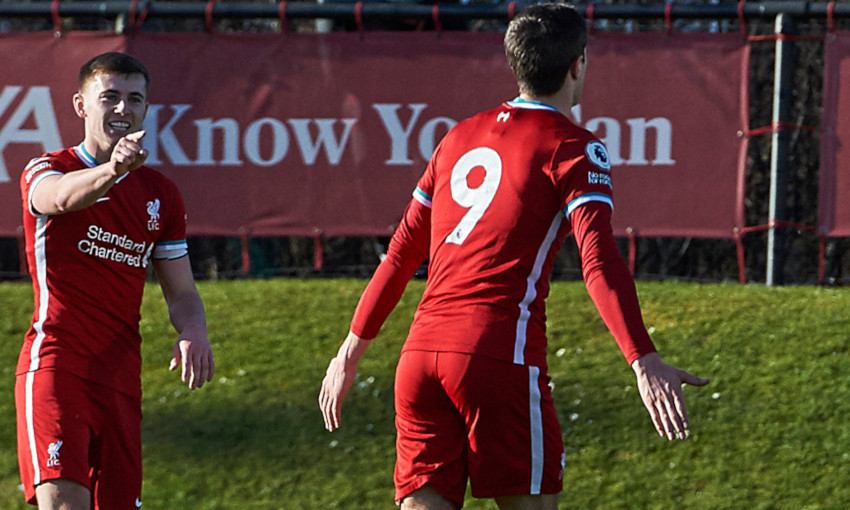 Layton Stewart is eager to increase his goal tally for Liverpool U23s this season after netting in their 4-0 victory over Arsenal last weekend.

The 18-year-old striker opened his account at Premier League 2 level with a well-taken effort at Chelsea last month.

Then on Saturday, he followed that up with a typically clinical finish to set the young Reds on course for an excellent win against the Gunners, which saw Jake Cain hit two and Ben Woodburn complete the scoring.

Including his goals for the U18s, Stewart has now got 17 for the season - and counting.

"It was a great team performance," he told Liverpoolfc.com.

"We worked our socks off. Barry [Lewtas] told us before the game to press them and we'll get goals, and most of our goals came from our pressing, which is good.

"All the goals were great team goals, working for each other. We got at them and it paid off for us."

Stewart, who has been at the Academy since the age of five, feels he has now acclimatised to U23s football and wants to build on his progress so far.

"I got off the mark at Chelsea last week and then it was great to score again against Arsenal. Ben worked so hard with the press and the ball fell to me and I was able to put it away.

"When I first came into this team it was a bit of a struggle but now I'm getting into the groove, feeling good and getting my goals now.

"I just want to keep going now, keep trying to score and help the team win."

Before the U23s took to the field to face Arsenal, Stewart and teammate Tyler Morton watched on as the U18s claimed a stoppage-time winner to beat Everton 2-1 in the mini-derby.

Having started the campaign together in that side under Marc Bridge-Wilkinson, the duo wanted to lend their support to the younger age group.

"It was a brilliant day for the boys," said Stewart.

"We watched the U18s getting the late winner against Everton to do the double over them this season, which was brilliant, and we did our job for the U23s, a clean sheet and three points."