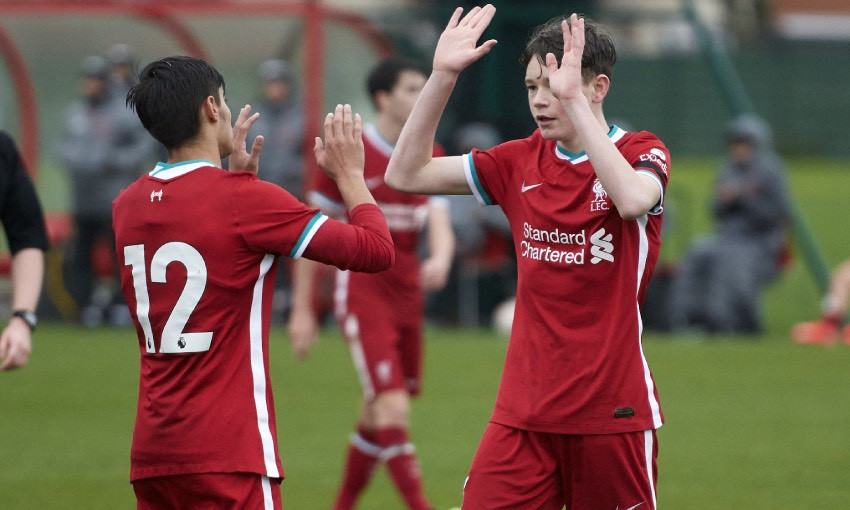 Liverpool U18s earned a hard-fought 2-1 victory away at Stoke City in the U18 Premier League North on Tuesday afternoon.

Oakley Cannonier's second-half goal secured the three points for the young Reds after a battling display at Clayton Wood.

James McConnell marked his full debut at the level with a superb 12th-minute volley to give Liverpool the lead, before Stoke equalised four minutes later through Tom Nixon.

A scrappy first 10 minutes was followed up with a piece of brilliance that produced the opener.

Stoke attempted to clear the danger in the aftermath of a Cannonier shot that had been saved. But that clearance went straight to McConnell on the edge of the box, with the No.7 thrashing a first-time effort into the bottom corner.

But Stoke's response was quick and clinical as Nixon headed in beyond Reds stopper Fabian Mrozek from an in-swinging free-kick.

In the closing moments of the first half, Mrozek was on hand to ensure the game entered half-time at 1-1 by strongly pushing away a goal-bound effort from Stoke forward Andre Godfrinne.

Mrozek then kept out Emre Tezgel's long-range strike early on in the second period as Stoke enjoyed a strong spell.

LFCTV GO: Watch the best of the Stoke action

But as snow flurries began, Liverpool took charge of the contest.

Mateusz Musialowski was denied by Stoke goalkeeper Paul Cooper inside the penalty area, though the visitors did manage to retake the lead moments later.

Musialowski turned supplier on this occasion, allowing Cannonier to run through on goal with a perfectly-executed through ball. The striker slid to meet the pass and fired the ball into the back of the net in minute 66.

Marc Bridge-Wilkinson's side defended valiantly to keep hold of the points and were unfortunate not to net a third goal as Isaac Mabaya was thwarted by the 'keeper following a rapid counter-attack.