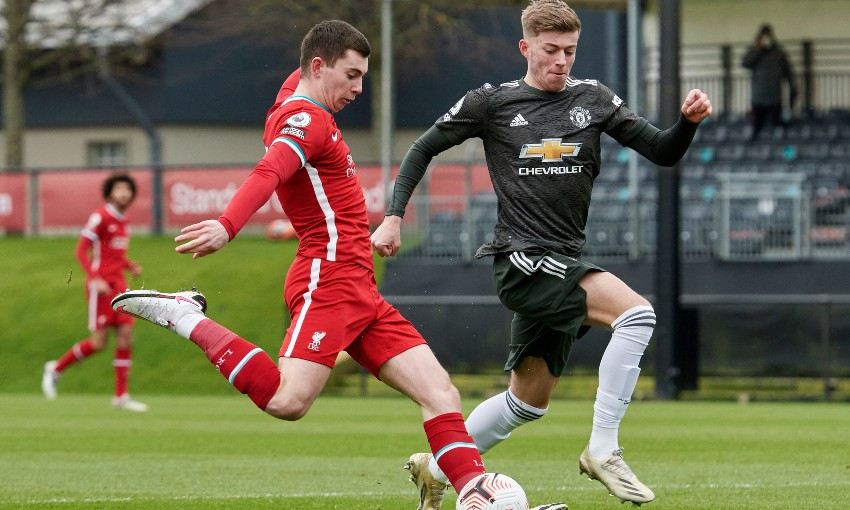 Liverpool U23s were defeated 6-3 by Manchester United at the Academy on Saturday afternoon.

Goals from Tyler Morton and Luis Longstaff saw the young Reds fight back from two down to go in all square at the break amid typically blustery conditions in Kirkby.

But United, for whom Amad Diallo and Joe Hugill netted in the first half, emerged the stronger side in the second 45 and reassumed their lead through Hugill.

United’s No.9 went on to convert the visitors’ first penalty and score again to end the match with four goals to his name, with Diallo adding another spot-kick late on.

Selfless work from Fidel O’Rourke - who slid in to dispossess United centre-back Reece Devine - afforded Ben Woodburn a sight of goal inside the opening five minutes, but the Wales international’s powerful, rising drive was tipped over by Matej Kovar.

Indeed, that typified Liverpool’s front-foot approach in the early stages, and Woodburn and Morton each went close with low attempts from the edge of the area.

However, a clinical finish by Diallo, who nicked the ball away from Billy Koumetio before racing clear, put United ahead against the run of play with a little under a quarter of an hour played.

Alert defending by Koumetio ensured Brandon Williams’ dangerous delivery from the right was cleared emphatically but, midway through the half, United got their second goal when Hugill latched onto Arnau Puigmal’s throughball and calmly beat Marcelo Pitaluga. 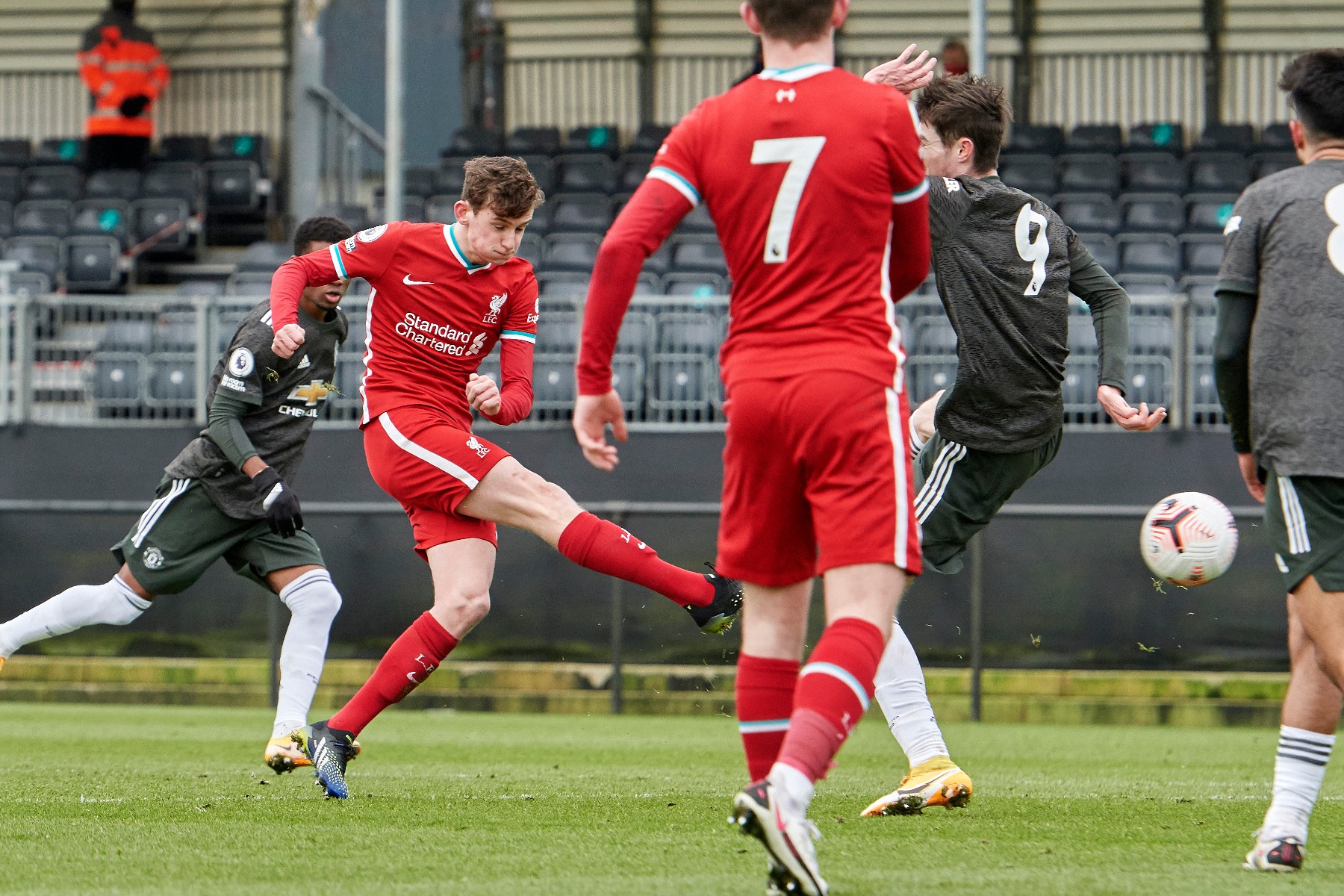 The young Reds responded positively, though, and duly halved the deficit courtesy of Morton’s terrific strike.

Jake Cain’s in-swinging free-kick from the right touchline was only partially cleared and the No.8, lurking 20 yards from goal, met the loose ball with a sweetly-struck half-volley that arrowed into the corner.

An injury then forced O’Rourke off and his replacement Hardy was immediately influential as Liverpool levelled shortly before half-time.

The forward battled to regain possession on the byline and unselfishly squared to Longstaff, who swivelled and smashed home from close range. 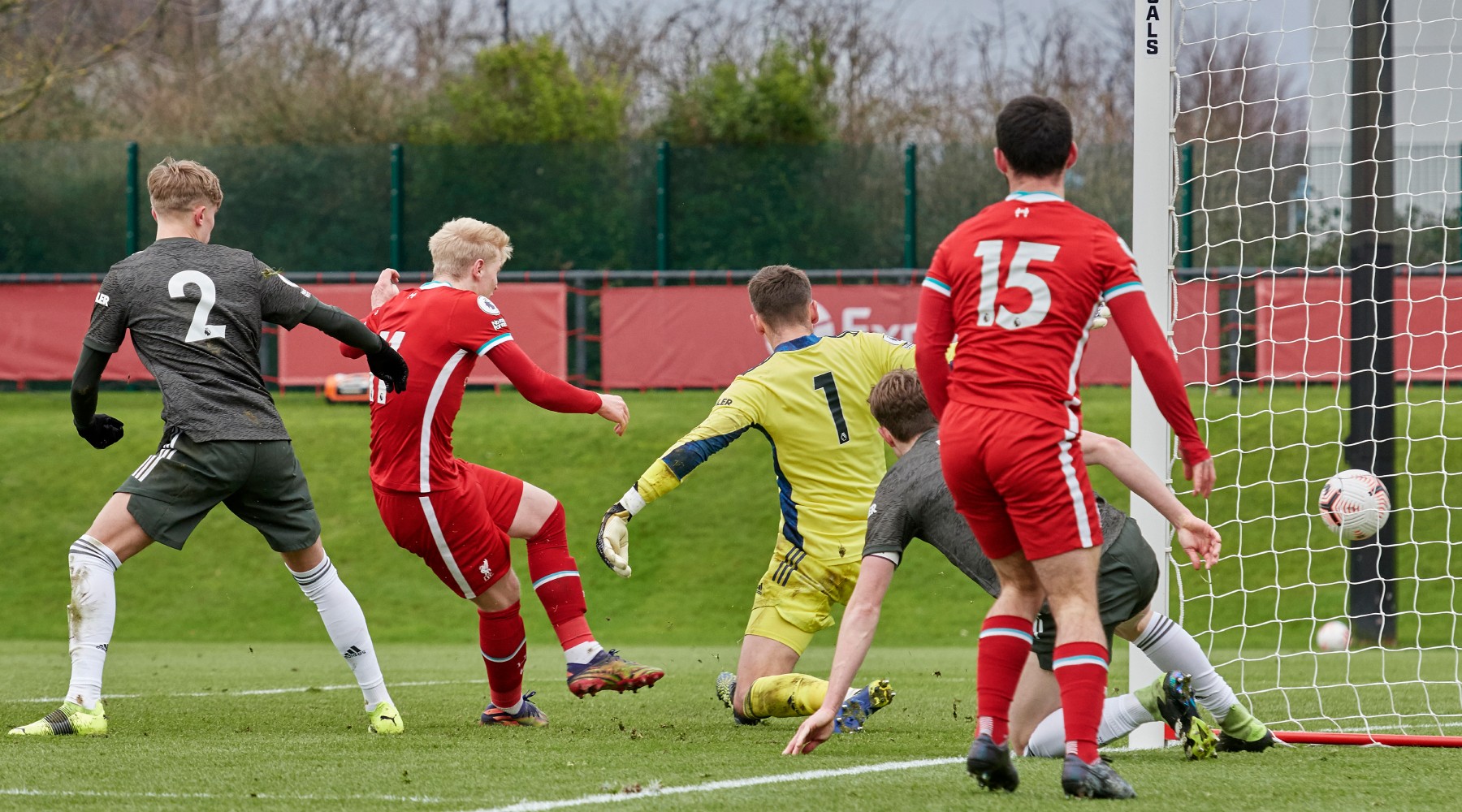 Hugill and Woodburn traded efforts in the opening few minutes of the second period, but United were the quicker side to settle and hit the front again through Hugill with 56 minutes on the clock.

Kovar got down sharply to deny Woodburn as Liverpool sought to get back on terms rapidly, though their chances of salvaging anything from the game were dealt a huge blow when the referee adjudged Tom Clayton to have brought down Hannibal Mejbri in the area.

Hugill subsequently completed his hat-trick from the spot and then added his fourth of the day via another confident finish, prior to Diallo netting a penalty of his own after Clayton had again fouled Mejbri.

Hardy would mark his comeback from injury with a poacher’s goal seven minutes from time, but the damage had been done.