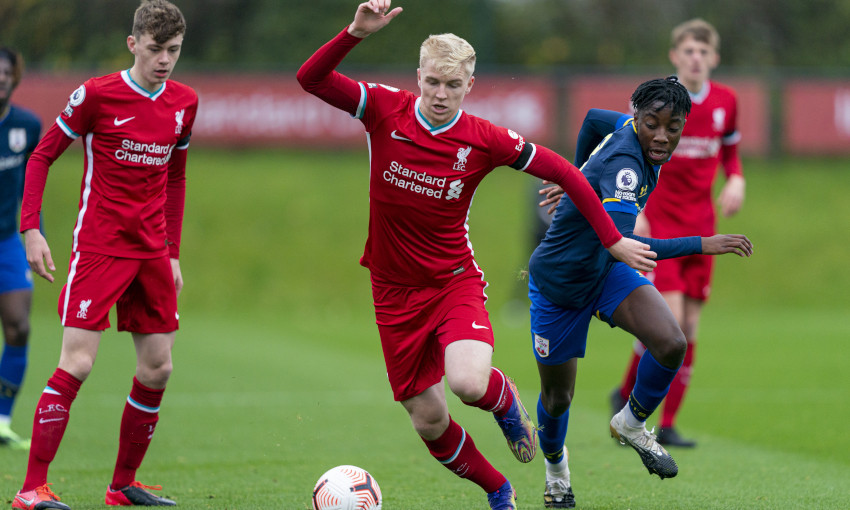 Liverpool U23s moved top of Premier League 2 with a point from an entertaining goalless draw against Southampton at the Academy on Saturday.

Barry Lewtas’ Reds generated a host of good opportunities to score – as did their opponents – but impressive displays from both goalkeepers, and the woodwork, ensured the game ended 0-0.

Nevertheless, the result was sufficient to lift Liverpool to the summit of the table, ahead of Derby County on goal difference.

The two sides paused before kick-off to observe a minute’s silence in honour of legendary Liverpool goalkeeper Ray Clemence, who passed away last Sunday.

Only nine minutes had elapsed when Liverpool created the first clear chance of a half filled with them at either end.

Conor Bradley’s incisive forward pass released Paul Glatzel into the right-hand side of the area. The striker cut in on his left foot before firing in a low shot that was well saved by Kingsley Latham and Luis Longstaff guided the rebound wide.

Saints were saved by the woodwork on 16. The livewire Liam Millar drew appreciative applause from Jürgen Klopp and his coaching staff – watching on from the sidelines – as he ducked in off the left flank and smacked a curler that thudded against the far post. 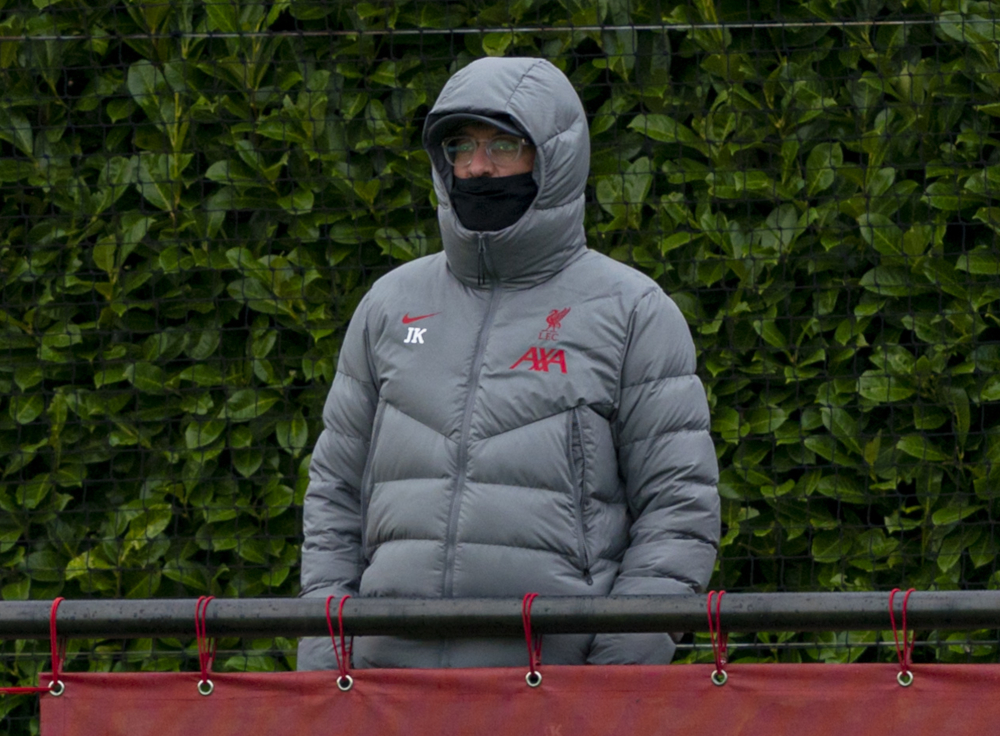 The visitors shrugged off that early pressure and began to assert themselves, with Kazeem Olaigbe a persistent threat playing on the shoulder. Sepp van den Berg and Caoimhin Kelleher each stepped in to thwart him, though.

Glatzel required treatment for a kick to the ankle but was able to continue and looked a certain scorer when found in the box by Longstaff, only for a slightly heavy touch to allow David Agbontohoma to intervene.

LFCTV GO: The best of the Southampton action

Tyreke Johnson could have handed Saints a lead when a Van den Berg header back to Kelleher fell short but his lofted effort drifted off target to the left.

Millar’s speed and directness fashioned a brilliant opportunity with three minutes of the half to go. Having surged into the opposition area, the Canada international opened his body for a strike that Latham bravely and firmly blocked.

One more chance came to Southampton before the interval. Kelleher was unable to claim a right-wing corner but made amends with safe hands when Johnson sent the loose ball back towards goal. 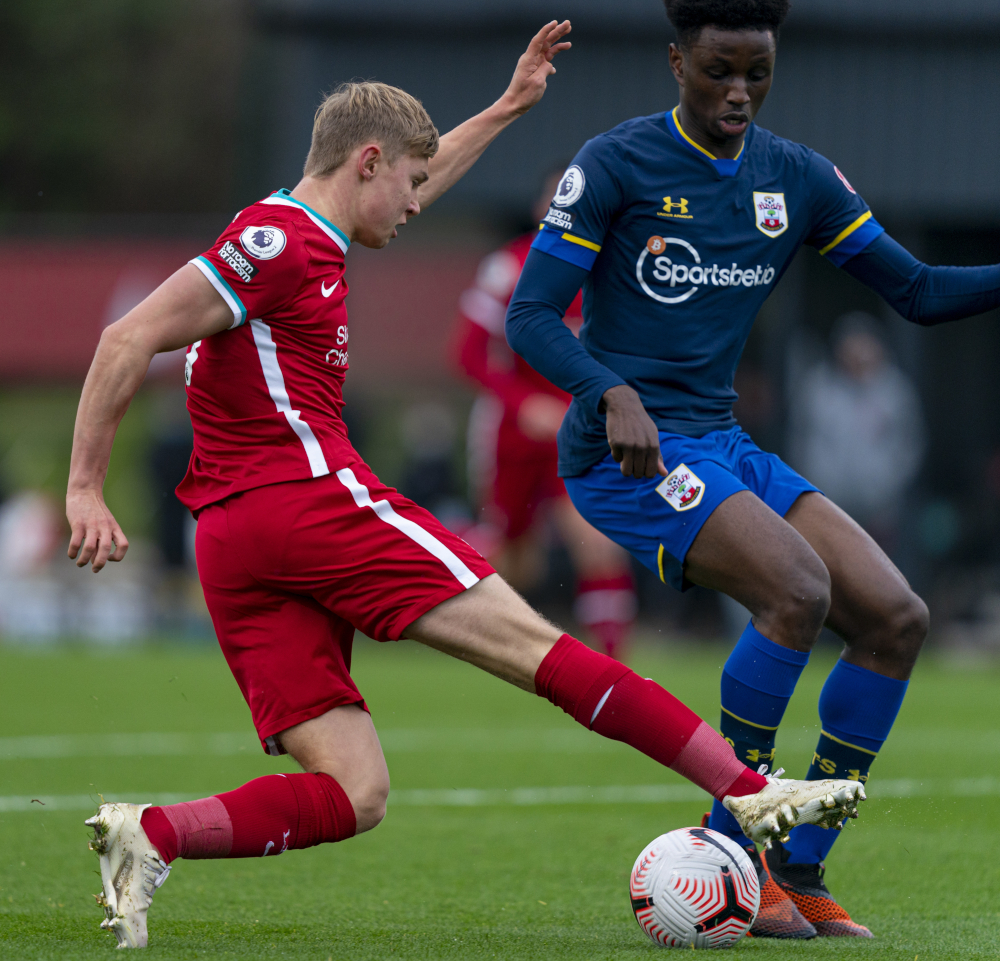 Lewtas sent on Fidel O’Rourke at the outset of the second half, in place of Glatzel as a precautionary measure following the latter’s knock earlier in the game.

It was the away team who had the momentum when the action resumed and Kelleher was required to make a quickfire double save to keep Saints at bay.

First, he denied Alexandre Jankewitz with an outstretched leg after Southampton outnumbered the Reds and then an even better stop, Kelleher showing superb reflexes to divert Johnson’s rising wallop from the edge of the box over the bar.

Latham pushed away a curling Tyler Morton free-kick that looked on course for the top corner and O’Rourke misjudged a promising headed chance as the contest somehow entered its final quarter with the score still goalless.

Liverpool were awarded a penalty on 77 minutes as O’Rourke ran through to collect Millar’s clever pass in behind and was brought down in the box.

But after spotting a raised flag by the linesman for offside against O’Rourke, the referee cancelled his original decision and play restarted with a Southampton free-kick.

The hosts lost substitute Joe Hardy to an injury just moments after he took to the field that needed prolonged attention from the medical team.

And, perhaps as felt inevitable by this stage, the free-flowing encounter in Kirkby concluded without an indent on the scoresheet.