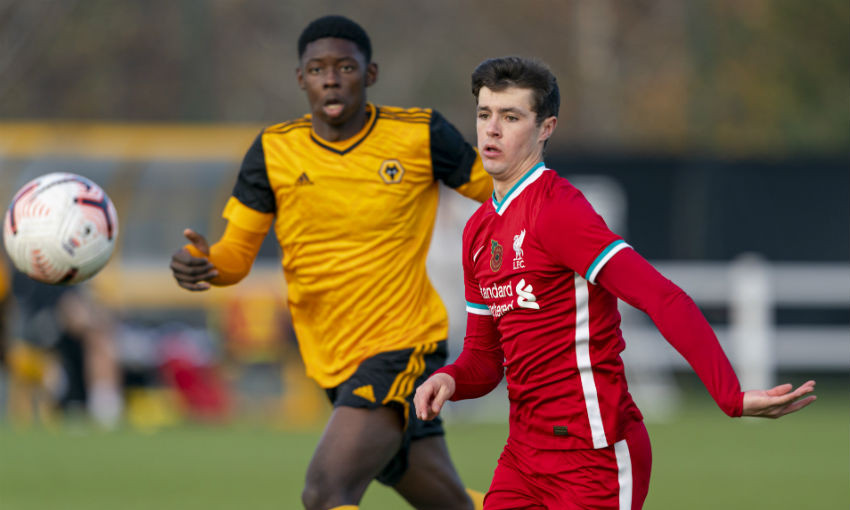 Liverpool U18s lost out to a stoppage-time goal as Wolverhampton Wanderers claimed a 2-1 victory over the young Reds’ 10 men.

Wolves captain Oliver Tipton duly converted the resulting penalty to cancel out Layton Stewart’s 10th goal of the season, which was Liverpool’s reward for a strong start to the game.

Marc Bridge-Wilkinson’s team, who were denied on several occasions by Wolves goalkeeper Joe O’Shaughnessy prior to the red card, actually looked the more likely side to snatch a late winner as they reacted positively to being at a numerical disadvantage.

But substitute Erik Bugarin’s 92nd-minute finish squirmed its way through Jakub Ojrzynski to halt their four-match winning run and inflict a second defeat of the campaign.

LFCTV GO: Watch the best of the Wolves action

Jarell Quansah’s recovery pace enabled the Liverpool skipper to race back and complete a crucial last-ditch challenge to thwart Tyler Roberts after the Wolves striker had latched on to an early long ball over the top of the away defence.

The young Reds settled following that scare and Dominic Corness served notice of his creativity by swinging in a cross from deep on the left. Max Woltman read Corness’ intentions and got across his marker but could only flash a header wide.

Corness’ next involvement did lead to a goal, though, as the No.7 punched a low delivery into the area for the prolific Stewart to meet sweetly with a left-footed strike that whistled past O’Shaughnessy with 12 minutes on the clock. 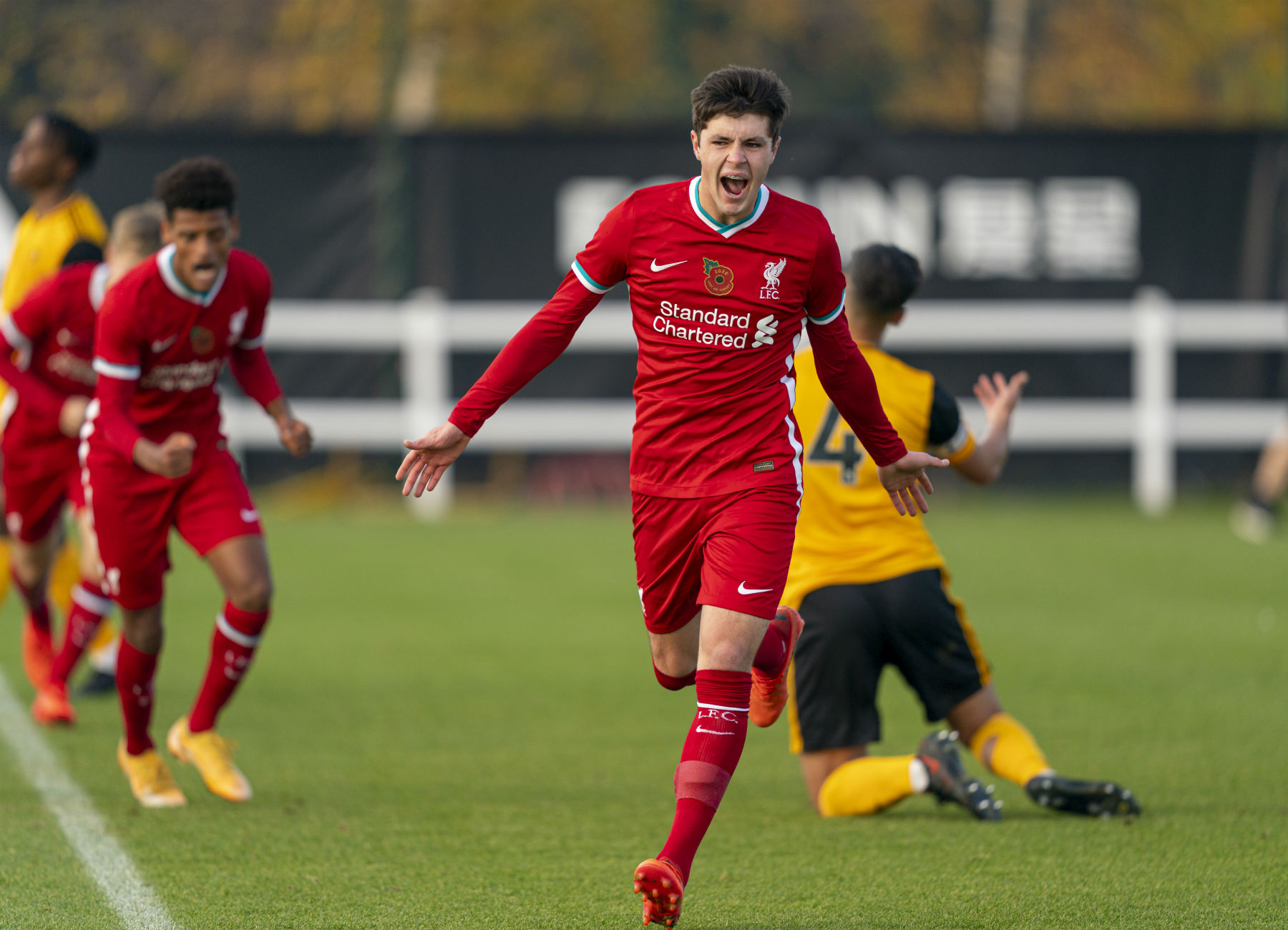 Stewart nearly turned provider for Melkamu Frauendorf midway through the half when he sent a dangerous ball in from the right, but the Germany youth international couldn’t stretch far enough as he slid inside the six-yard box.

A steady stream of pressure didn’t yield another goal for the visitors, however, and Wolves twice went close to levelling shortly before the break.

First, Owen Hesketh sliced a half-volley wide after a corner had only been partially cleared, before Ojrzynski acrobatically tipped Jack Hodnett’s dipping effort from distance over the crossbar.

Liverpool reassumed command of proceedings in the early stages of the second half, with Stewart almost doubling their advantage on two occasions within minutes of the restart.

Tyler Morton slipped the No.9 in down the inside-right channel and his drive across O’Shaughnessy was well saved by the ‘keeper. Stewart then attempted an audacious first-time lob that looped over O’Shaughnessy and onto the roof of the net. 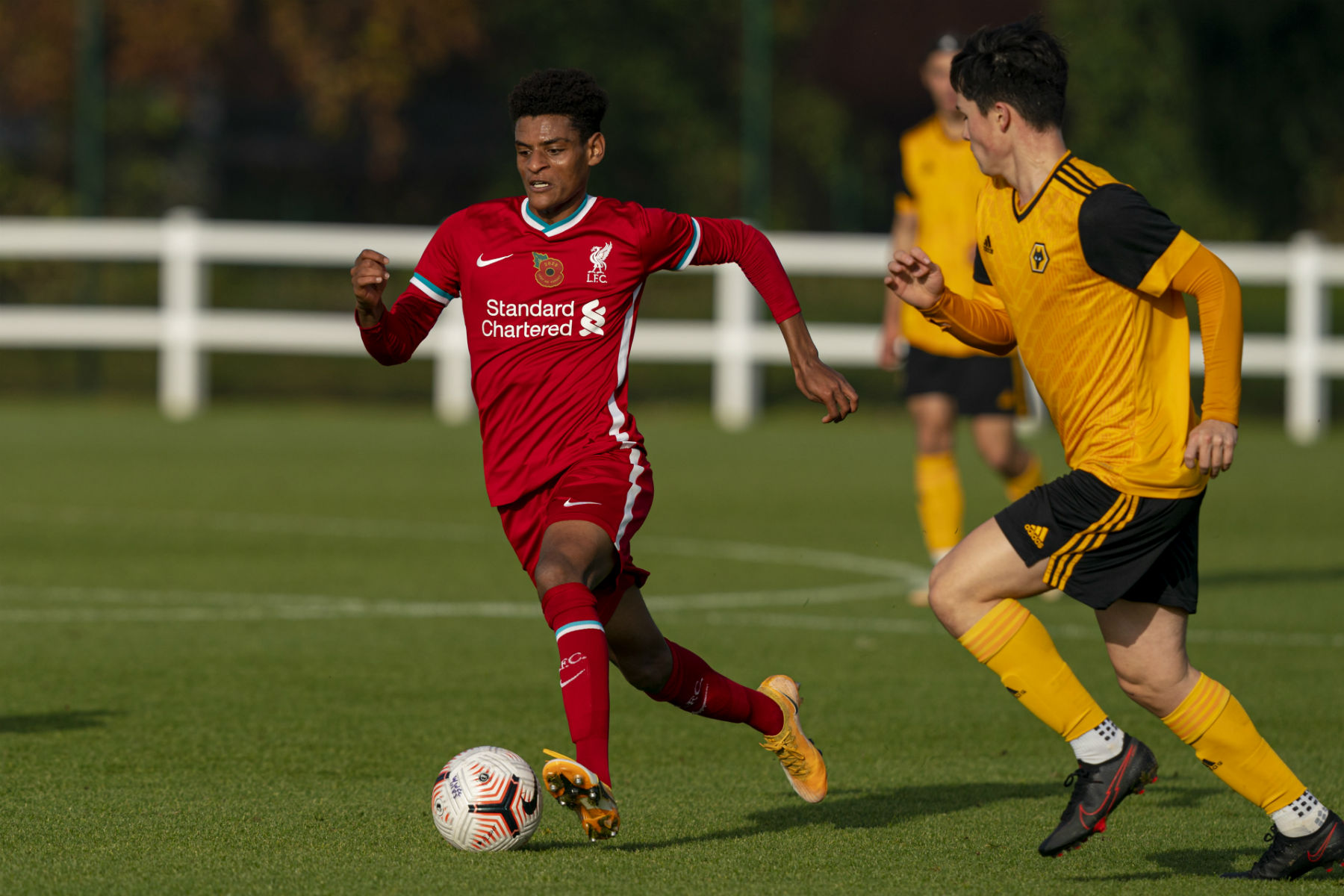 Ojrzynski was again called into action to deny Dexter Lembikisa before Stewart and O’Shaughnessy resumed their personal duel, with the stopper this time palming the forward’s powerful header over the bar.

But the young Reds’ momentum was checked when Stephenson was sent off and Tipton equalised from the spot.

Corness and Conor Bradley both tested O’Shaughnessy soon after as Bridge-Wilkinson’s team responded in spirited fashion, and Quansah then saw a back-post header from a corner hacked off the line.

However, there was to be late drama at the other end as Bugarin secured all three points for Wolves.