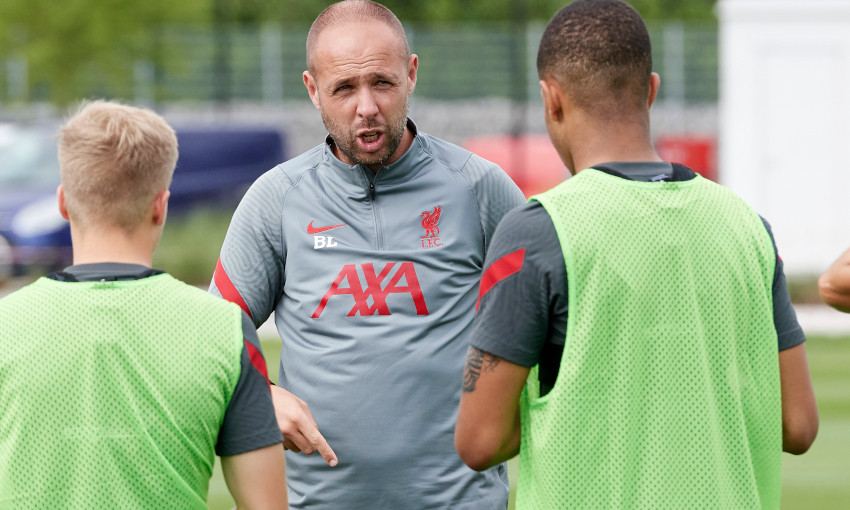 Barry Lewtas believes the EFL Trophy can be of great benefit to his Liverpool side this season.

An U21s squad will represent the Reds against Wigan Athletic in their first group game of the competition tonight.

The behind-closed-doors fixture will be played at the DW Stadium, with kick-off set for 7pm BST.

Lewtas' charges are also set to meet Tranmere Rovers and Port Vale in the section, with teams facing each other once only.

As an invited club from the Premier League, Liverpool are scheduled to play all of their group matches away from home.

The winners and runners-up in each pool for both the northern and southern sections will progress to the last 32, with the tournament then undertaking a knockout format.

Lewtas is certain the challenge of competing with more senior players is one his young players need in their continuing development.

"We are really looking forward to it, it's a competition [where] we will be playing against first teams with a few young boys in, but it will certainly be against a team driven by the first-team manager," he told Liverpoolfc.com.

"There are rules and regulations around a certain number of first-team players playing in this competition, so for us we want to try to test the boys and stretch them in different ways.

"We just feel this competition is one that can do that for us."

At U23 level, Lewtas' charges have started the season with mixed results – a 1-0 victory over Everton in the mini-derby was followed by last Friday night's unfortunate 2-1 loss at Derby County.

"From a performance point of view we haven't been perfect but we've been good and been very good in moments as well against Everton and Derby County," he added.

"Obviously we were disappointed with the result against Derby and disappointed with a few moments in the game which we felt swung it in their favour, but in terms of the overall performances and trying to plot our way through a season we are happy where we are.

"We know there is plenty of room for improvement but the level of football we are trying to play at the moment is really good."

With Manchester United to come in Premier League 2 on Friday night, this represents a challenging week for the Reds youngsters, but Lewtas insists they are embracing it.

He said: "It's a tough start with three games in a week with Wigan, Manchester United and then Tranmere Rovers but this is how we want to test the boys."

Lewtas actually began his Academy coaching career at Wigan, guiding their youngsters aged 10 to 13 at their Centre of Excellence in 2013.

"It was a long time ago but it was kind of where it all started for me so I've got really fond memories and really good times, so I always enjoy playing against Wigan and it's exciting for the lads to get to play at the DW Stadium," he said.

"If Wigan do use a few of their younger lads there will probably be a few who were involved at Liverpool early on in their Academy career, so there might be a few lads we know and a few familiar faces, but each game we take as it comes and we are really excited to be involved in it."

Due to competition rules, extended highlights will be made available to watch on LFCTV and LFCTV GO on Wednesday afternoon.