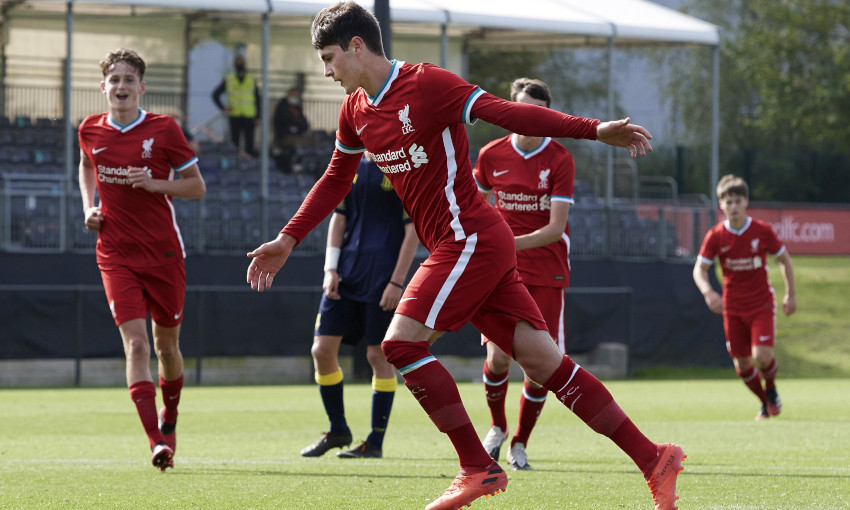 Hard work on the training pitch paid off for Layton Stewart as he bagged a classy hat-trick for Liverpool U18s on Saturday.

The 18-year-old was in clinical mood against Stoke City at the Academy and struck twice in the opening 45 minutes, with a precise, dinked finish followed by a cool penalty.

The pick of the bunch was his third after the break, however.

Collecting the ball outside the Stoke area, Stewart weighed up a curler into the far right corner and superbly achieved his objective to seal the personal treble.

And it was a case of practice makes perfect.

“I’ve done a lot of work in training with the likes of Bridgey [Marc Bridge-Wilkinson] and Alex [Inglethorpe], we’ve been doing it on different days. I tried it today and luckily enough it came off for me,” he told Liverpoolfc.com post-match.

“It’s always good to start the season with a hat-trick and it was a good team performance from the boys, you can’t take anything away from that.

“Of course, good to get on the scoresheet and get my first hat-trick.”

The 5-0 victory over Stoke represented Liverpool U18s’ first taste of competitive action since March 3 – one relished by Stewart and his teammates.

“It’s good to get back playing,” added the striker.

“Some lads [are] coming in from different countries and they have adapted well, and the players coming up have adapted well to the game. It’s very good to get back out there and get some minutes in our legs.”