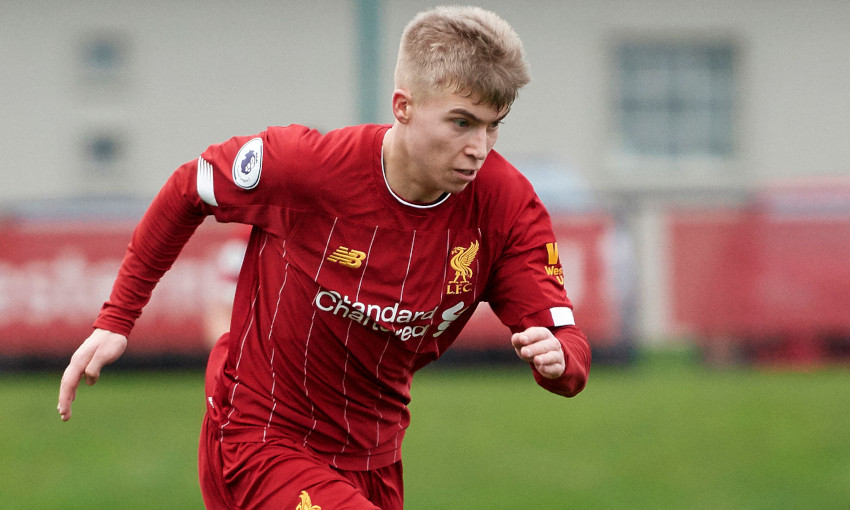 Scoring the winning goal in two derby matches for Liverpool is always going to get you noticed.

Jack Bearne achieved the feat back in 2018-19, during his first full season with the U18s.

The first time came under the Kirkby floodlights as Bearne came off the bench to defeat Everton in the 90th minute.

The teenager got his head on a Leighton Clarkson free-kick to secure a dramatic 4-3 victory over the Blues.

Bearne then repeated the trick in the reverse meeting at Finch Farm, slotting in the only strike of a 1-0 win for the Reds.

“They were two great moments, especially the 4-3 game and the team played really well,” he told Liverpoolfc.com.

“Me and Leighton Clarkson were joking about it the other day when he was asking me did I get a touch – and I did! I did manage to get my head on the ball and it was a brilliant moment to score the winner.

“It was a very good team we had that season and we went on to win the FA Youth Cup.

“We had two goalscorers in Paul Glatzel and Bobby Duncan scoring a lot and the team had a good balance.

“It was an amazing feeling and then to do it again as well at Finch Farm. Hopefully it’s not the last time I do it.”

Bearne certainly played his part in the FA Youth Cup final win over Manchester City, too – he kept his nerve to coolly convert a penalty in the shootout victory. 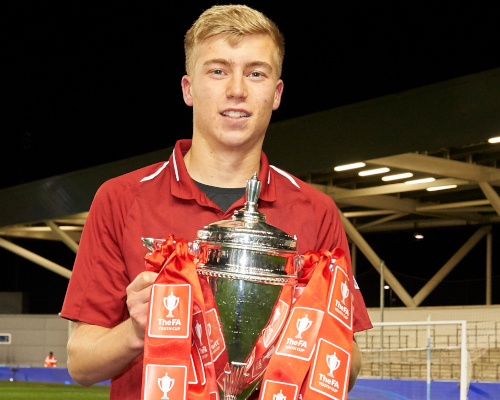 “I will always remember the FA Youth Cup win and it’s probably one of the best moments of my career so far,” he added.

“Being part of the team and part of the squad to lift the trophy on the pitch, it’s obviously one of the most prestigious trophies at youth level and I was very happy to score a penalty and the team deserved it after the way we performed in each round.

“I have been quite confident from penalties before. I took a few in the U16s and I asked Barry if I could take one.

“I was quite confident walking up to the spot and you have to have your head in the right place and pick a corner to go with. I was always looking at bottom right and I thought if I put enough pace on it, it will go in and luckily it did.”

This season, a first-team opportunity arrived when Bearne appeared as a 65th-minute replacement for Luis Longstaff in the Carabao Cup quarter-final at Aston Villa.

We caught up with the attacker to reflect on his recent progress in the latest edition of our Meet the Academy series...

How are you during these uncertain times?

At the moment it’s quite tough being away from football and I am missing it quite a lot. Hopefully – as you can see with the players returning to training – it won’t be too long before we can get back too. We have been doing a lot of video calls and sessions with the sports scientists and lots of members of staff, so everyone is keeping in regular contact. We have also been doing a lot of running and trying to keep the fitness up.

So, how did your move to the Academy come about?

I started at Notts County and I was scouted by them at the age of six. I joined their youth development squad and trained on their local astro turf pitches and I made a lot of friends in the U9 to U15 age groups before I joined Liverpool. It was a really good time. By the time I was 15, there was a scout from Liverpool who was watching me. I came down to play against Liverpool with Notts County at the Academy and we got battered. We actually lost 15-2, but I managed to score the two goals for us! Jake Cain was in the Liverpool team and they were brilliant. It was a difficult game but hopefully I made an impression and then signed for Liverpool, which was just a fantastic moment.

What was it like to make your Liverpool U18s debut under Steven Gerrard as an U16 player?

I mean, Stevie was one of the best players to have played in the Premier League. He is an absolute legend of this club. I was in the U16s at the time and Steven gave me lots of drive and determination to try to get to the U18s because I was desperate to be coached by such an amazing player. In the coaching sessions that we had, it was just amazing really to be coached by someone like him. I took it all in my stride and will keep that with me forever.

You’re happy to play in any position across the front line for the good of the team, aren’t you?

I’m happy to play where the team needs me. As long as I’m getting minutes, I just want to do the best I can on the pitch. I like playing as a striker or on the right wing because I like to run at the defence and try to get into dangerous positions and create opportunities.

What’s been the influence of Barry Lewtas in your development?

I joined Liverpool as an U15 player and Barry was the manager of the U16s. Barry has been a really, really positive influence on me because he is a really good coach and he is really good with his players. He speaks to a lot of us off the pitch and has a laugh and a joke with all of us. He is a really good influence on us and it shows because the team delivers with results on the pitch for him.

Your start to 2019-20 was unfortunately disrupted by injury…

It was unfortunate because it was actually the same injury I had the year before on my ankle with a ligament injury. I had to have surgery and it was a tough time because you just want to get going at the start of the season and prove what you are for this season. It was difficult but I tried my best in rehab and I was just determined to get back. Thanks to the physios and the sports science coaches, I was able to come back and I felt good. 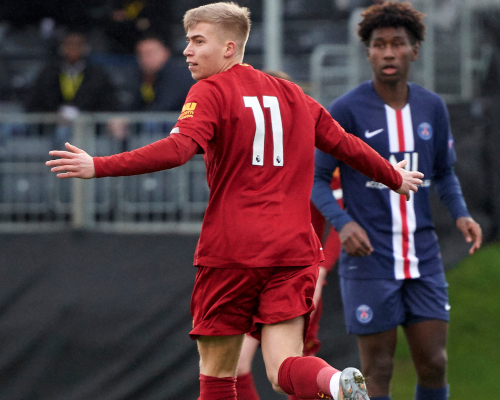 In December, you came off the bench to net the dramatic stoppage-time winner in the UEFA Youth League tie in Salzburg…

That was amazing! Coming to Liverpool I knew there would be chances to play in the UEFA Youth League. I watched a lot of it on TV when I was growing up and it’s an amazing competition to play in. That game I was on the bench but even though we hadn’t started off great at 2-0 down, we were coming into the game. Harvey Elliott scored a penalty and when I came on I just wanted to get a tap-in or a goal to win it. And luckily I did. It was a brilliant bit of play from Layton Stewart to set me up. Salzburg were a really tough team and there was quite a lot of fans from their side. It was a great atmosphere, absolutely freezing as we were next to a mountain. But it was fantastic to get the win.

It’s different to the U18s. You can have first-team players around the U23s but it’s a lot more physical and I think you’ve really got to be clever in the way you play and be more intelligent. It’s definitely a lot of running as well, so it’s improved my fitness more than anything. You also learn to be more intelligent on the pitch against older players who have more experience.

What are your hopes and aspirations for the future, then?

Next season I really want to try to cement a regular place in the U23s and start a lot of games. Also, to hopefully get one or two training sessions with the first-team squad and try to impress the first-team coaches. But mainly to get into the U23s team and try my best.

How much inspiration will the first team moving to Kirkby provide?

It’s exciting and it gives you more drive and determination to get to where the first team are, watch them more closely and see what they do and try to aspire to that.