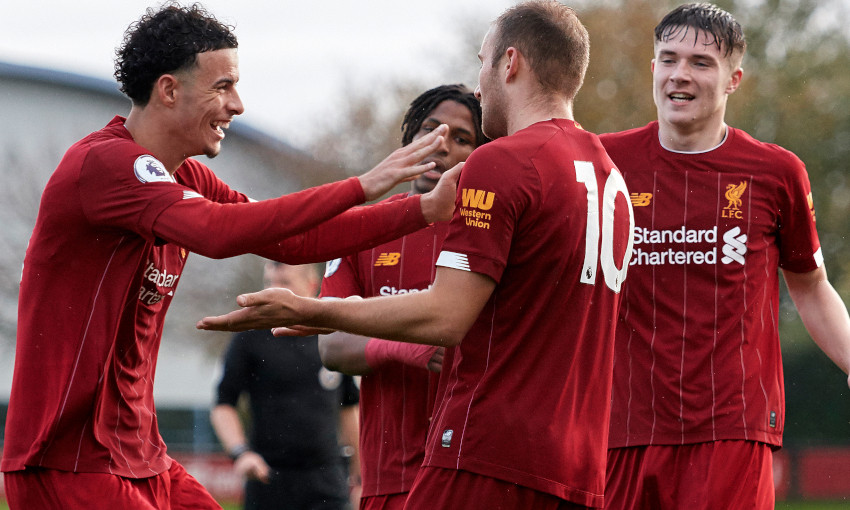 The 2019-20 season so far has been full of promise and memorable moments for Liverpool's Academy hopefuls.

Ranging from great games to new deals, we have picked out some of the highlights from the campaign to date.

There was mixed news for the Academy in pre-season. Leighton Clarkson penned his first professional contract in July but, in a double blow, Paul Glatzel and Abdi Sharif suffered ACL injuries.

When the action got underway a Liverpool U21 team, playing in the Leasing.com Trophy for the first time, narrowly lost 3-2 away at Oldham Athletic - Neco Williams netting a stunning goal and Harvey Elliott also on the mark on his Academy debut.

Curtis Jones received a boost in the opening month of the season when he was appointed captain of the U23s. 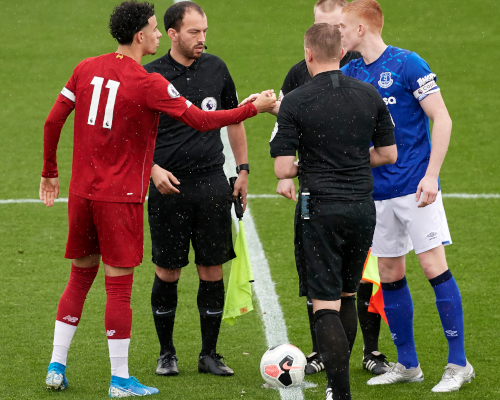 On that decision, Neil Critchley said: “Curtis is obviously a local boy and he has come through the Academy. If possible, we will always try to get somebody to lead the team of that ilk.

"I thought it would be the right thing to do to give Curtis some added responsibility and try to develop his leadership qualities within the team.

"He's a technical leader for us so he's brave enough to take the ball into any situation on the pitch, but he's also got a good football brain as well. So if he can pass that on to the others during the game in the good moments and the bad moments then I think that will help him to grow as a person, which is something I can try to help him with.”

Liverpool U18s kicked-off their season in style, hitting seven past Blackburn Rovers before the month ended for Barry Lewtas’ team with a thrilling 4-3 victory over Manchester United thanks to Layton Stewart's 88th-minute winner.

Glatzel received a huge boost when he penned a new long-term contract in September. 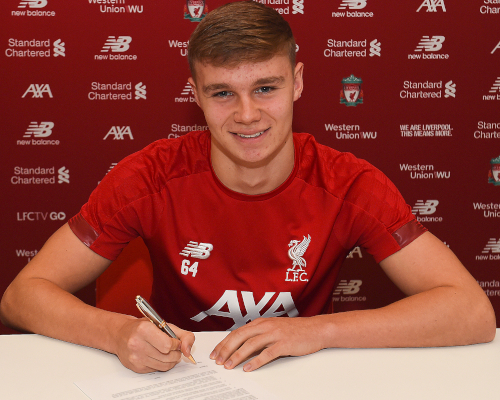 "I was disappointed to get my injury at the start of the season, but it's a great feeling and it shows that the club has got faith in me. Now I can just focus on my rehab and get back on the pitch," the striker said after penning his deal.

Jake Cain also signed his first professional contract with the club in September.

On the field, Liverpool U19s kicked off their UEFA Youth League campaign with a 1-1 draw away to Napoli, with Stewart coming off the bench to net a late equaliser on his European debut for the young Reds.

In more late drama, Luis Longstaff netted a stoppage-time equaliser as the U23s secured a 2-2 draw away at Leicester City in Premier League 2.

Critchley said: "You don’t score a 95th-minute equaliser if you are not pushing forward and not giving everything to try and score that goal, so I was really delighted with that aspect."

The U18s scored yet another injury-time winner, this time Fidel O’Rourke sealing a 3-2 victory at Swansea City in the Premier League Cup.

It wasn't all good news, however, as Adam Lewis sustained a knee injury that would keep him out of action until the new year during the U23s' draw with Arsenal.

October started with another dramatic European encounter and Lewtas’ U19s, inspired by Jones, came back from 2-1 down to beat Salzburg 4-2 at St Helens in the Youth League.

Lewtas said: "Curtis is playing extremely well for the U23s. He is playing a big part in what they are trying to do and obviously he is a big influence in the dressing room, a positive one.

"The goal he got for us against Salzburg came at a good time for us and that was probably the difference in that game as well because we were extremely clinical. Scoring goals from midfield is something Curtis wants to add to his game, which he is doing.”

Going into the first mini Merseyside derby of the season, Lewtas told his U18s they would need their ‘A’ game’ to beat Everton - and they didn't disappoint, coming back from a goal down to win 6-1 at Finch Farm.

Jack Bearne penned his professional deal with the Reds and the month ended with an incredible night at Anfield as several Academy prospects starred as the first team beat Arsenal on penalties following a pulsating 5-5 draw.

The month began with another Merseyside derby and another victory for the young Reds – this time Critchley’s U23s in Premier League 2, thanks to a brilliant winner from Herbie Kane.

Hoever helped the Netherlands reach the semi-finals of the U17 World Cup in Brazil before November came to a conclusion with an incredible afternoon of European football at the Academy.

The month started with a frustrating loss for the U18s as they exited the FA Youth Cup after a 4-2 defeat to Tottenham Hotspur in the third round. Despite coming back from 2-0 down to level the scores at 2-2, two late strikes saw Spurs prevail at Stevenage FC.

There was a proud moment for Jones when he made his Premier League debut, entering the field as a 76th-minute replacement for Andy Robertson during the Reds' 3-0 away win at Bournemouth. 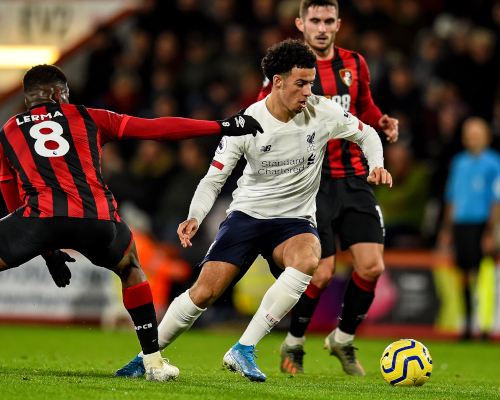 The U19s sealed qualification for the knockout stages of the Youth League with a dramatic 3-2 win in Salzburg.

Trailing 2-0, Elliott netted a penalty before Tom Hill made it 2-2 and substitute Bearne slid in a stoppage-time winner.

On December 17, with Jürgen Klopp and his first-team squad in Qatar for the FIFA World Club Cup, Critchley took charge of a youthful team for the Carabao Cup quarter-final against Aston Villa at Villa Park, with the hosts eventually winning 5-0 despite the spirited performance of Liverpool's young side.

The year was to end in style at the Academy, though, as the U23s came from 2-1 down to beat Paris-Saint German 3-2 in the Premier League International Cup. Hill equalised in the 88th minute and Yasser Larouci drilled home a stoppage-time winner.

The new year started with a Roy of the Rovers moment for Jones, as the teenage Scouser curled in a wonderful long-range winner to seal an FA Cup third-round victory over Everton at Anfield for a youthful Reds team.

Kane completed a loan switch to Hull City before the U23s welcomed a new striker as Joe Hardy joined from Brentford. Liam Millar returned from his temporary spell at Kilmarnock.

Hardy got off the mark for the U23s with a double as the young Reds swept aside Southampton 5-0 at the Academy in Premier League 2. 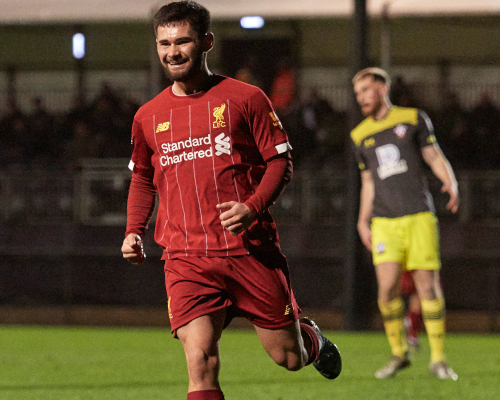 There was good news on the injury front as Lewis returned to action and Elliott netted a goal of the season contender with a stunning bicycle kick for the U23s during the 2-2 draw with Wolves at Molineux.

Wales U19 captain Morgan Boyes became the latest player to pen a new deal when he signed a contract extension on January 30.

With Klopp and the first team on their mid-season break, Critchley again took charge of a young side for the FA Cup fourth-round replay with Shrewsbury Town at Anfield.

On an incredibly proud night for the Academy, an own goal from Ro-Shaun Williams in front of the Kop sealed an unforgettable 1-0 win.

After the game, Critchley said: “The players have done the club proud tonight.

“The support we had was incredible, a full house - absolutely ridiculous for them to turn up and support those young kids. They were so appreciative of it. They stayed right to the end because they saw boys giving everything on the pitch.

“We played like a Liverpool team and I’m so proud of them.”

There was also joy for two first-year scholars as midfielder Hill and forward Stewart penned their first professional deal with the Reds.

March began with a fond farewell as Critchley was appointed manager of Blackpool FC.

Reflecting on his time with the Reds, Critchley said: “The time I’ve had at Liverpool has been truly special.

“I’ve been incredibly well supported there from Alex Inglethorpe, the Academy manager, and all the staff. It’s a truly special football club and it’s the people that make the football club the place that it is.”

There was frustration for the U19s after they exited the Youth League at the last-16 stage, going down 4-1 away to Benfica in the final Academy game prior to the enforced postponement of all matches.