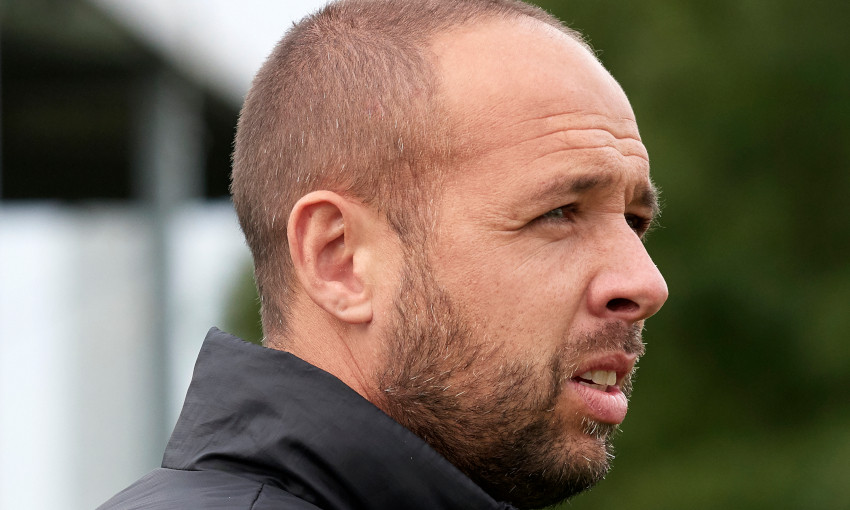 Liverpool U19s were eliminated from the UEFA Youth League at the last-16 stage with a 4-1 defeat to Benfica.

The Portuguese side surged into a three-goal lead inside the opening 26 minutes at Benfica Campus on Tuesday afternoon, with goals by Goncalo Ramos and Nuno Tavares sandwiching captain Tiago Dantas’ penalty.

Tyler Morton’s stunning half-volley in the latter stages of the first half gave Barry Lewtas’ team a foothold, and Vitezslav Jaros saved Dantas’ second spot-kick of the game in the final act of an eventful opening period.

But Ramos’ second goal just before the hour severely damaged the young Reds’ chances of mounting a comeback, before a straight red card brandished to Sepp van den Berg for bringing down Dantas extinguished hope altogether.

To cap a frustrating day for Liverpool, Leighton Clarkson was also sent off in stoppage time for kicking out at Rafael Brito when the Benfica No.6 pulled his shirt.

An evenly matched opening 10 minutes was played out at a purposeful pace, with both sides enjoying decent spells of possession without troubling the opposing goalkeeper.

However, Benfica then slipped through the gears and went in front with the game’s first shot on target as Ramos collected Dantas’ pass and found the bottom corner with a speculative effort from distance.

The hosts quickly doubled their advantage via Dantas’ first penalty. Ramos nipped in to take advantage of a heavy touch by Morgan Boyes and was subsequently brought down by the Liverpool skipper, with Dantas stepping up to convert from 12 yards.

Benfica were buoyant and only a fine save from Jaros prevented Ramos from netting again just moments later but, by the 26th minute, it was 3-0 as Nuno Tavares’ free-kick took a wicked deflection off the wall to leave the young Reds’ ‘keeper stranded.

Liverpool - playing without regulars Curtis Jones and Neco Williams due to their involvement at first-team level - recovered well from that 13-minute blitz, though, and deservedly hauled themselves back into the contest shortly before the break.

Harvey Elliott chested Clarkson’s vertical ball down to Morton who, from 20 yards out, dipped a stylish, first-time half-volley over Benfica stopper Leobrian Kokubo and into the net.

And Jaros sustained the feeling a fightback may be possible with a superb penalty save in first-half stoppage time; the 18-year-old this time getting the better of Dantas after Jake Cain had felled Tiago Gouveia in the area.

Liverpool began the second half on the front foot and went close to reducing the arrears further eight minutes after the restart.

Neat link-up between James Norris and Luis Longstaff enabled the left-back to get to the byline and stand up a cross to the back post. A partial clearance then fell invitingly to Morton inside the box, but the goalscorer sliced his volley wide.

But Benfica’s three-goal cushion was restored when Ramos’ strike from range squirmed through Jaros’ grasp and went in off the post.

A spirited response to that setback followed from the visitors, even after Van den Berg’s dismissal - the centre-back being penalised when Dantas went to ground while pursuing a long ball down the middle.

Boyes could have grabbed a consolation but the defender took an air shot once Clarkson picked him out with a drilled cross, before the midfielder was sent off in injury time.