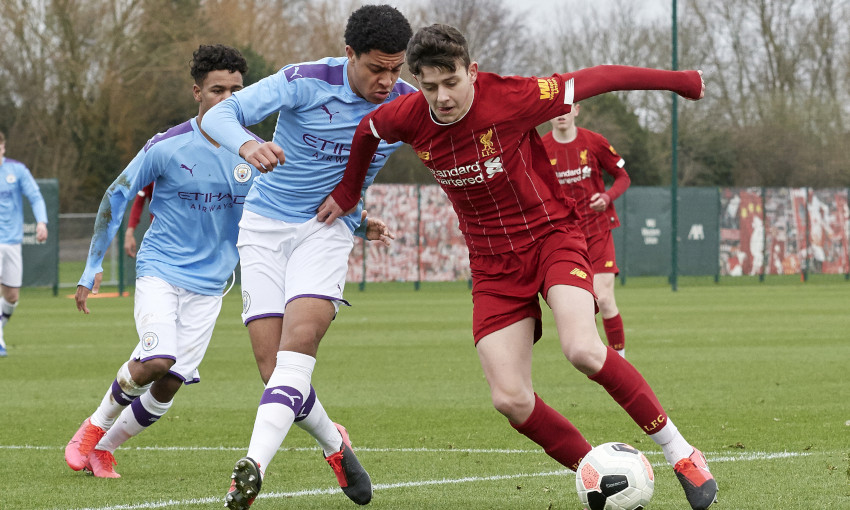 Liverpool U18s were beaten 4-2 in their top-of-the-table clash with Manchester City at the Academy on Saturday morning.

Liam Delap’s solo strike gave the U18 Premier League North leaders a ninth-minute advantage and they doubled it before half-time through Samuel Edozie’s smash off the bar.

James McAtee stretched City’s lead to three, only for the Reds to mount a late comeback with goals from Tom Hill and Max Woltman that was quashed by Cole Palmer’s 88th-minute clincher.

Barry Lewtas’ charges now trail by nine points at the summit but do have two games in hand.

Both teams realised the need to keep the play on the ground due to the severe winds in Kirkby and a direct, emphatic piece of football brought the visitors an opener.

After City cleared away a Liverpool corner, Delap picked up the ball in his own half and powerfully surged to the Reds penalty box before swiping a finish across the reach of Jakub Ojrzynski from the right.

The hosts thought they had levelled with 18 on the clock.

City squandered possession in their own territory and James Balagizi and James Norris quickly moved the ball into the run of Niall Brookwell off the flank.

The No.7’s instant strike was superbly saved by Cieran Slicker but he followed up and forced the rebound over the line despite the efforts of recovering defenders. The officials spotted a handball in the process, however. 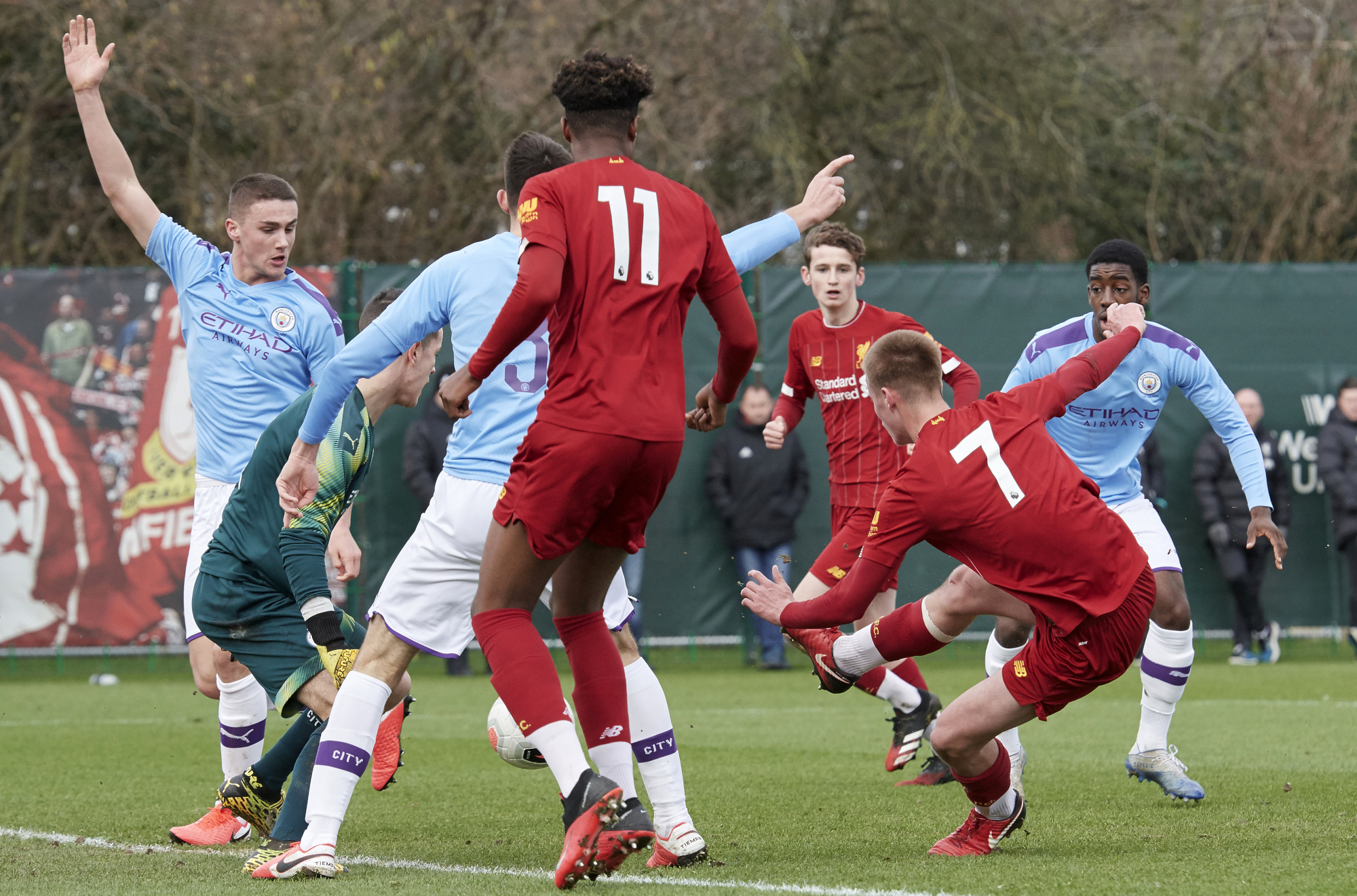 Lewtas’ side created another good chance soon after, Fidel O’Rourke capitalising on space in the right channel to pick out Balagizi in the area, whose close-range hit was blocked en route to goal.

City carved out a similar opportunity at the other end before the half-hour mark, Delap the man found in the middle. His side-footer was adeptly deflected by Remi Savage.

But the away team got their second in the 31st minute.

Edozie had been a persistent threat along the left wing and his quick feet fashioned a chance to step inside and thump a rising shot beyond Ojrzynski off the underside of the crossbar.

Liverpool made a positive start to the second half as they sought a way back into the contest but were indebted to their goalkeeper for preventing the deficit from increasing.

A slick City counter-attack led to Palmer feeding Edozie a shooting opportunity to the left of the Reds box. His drive was well struck yet close enough to Ojrzynski for the Pole to get firm gloves behind it. 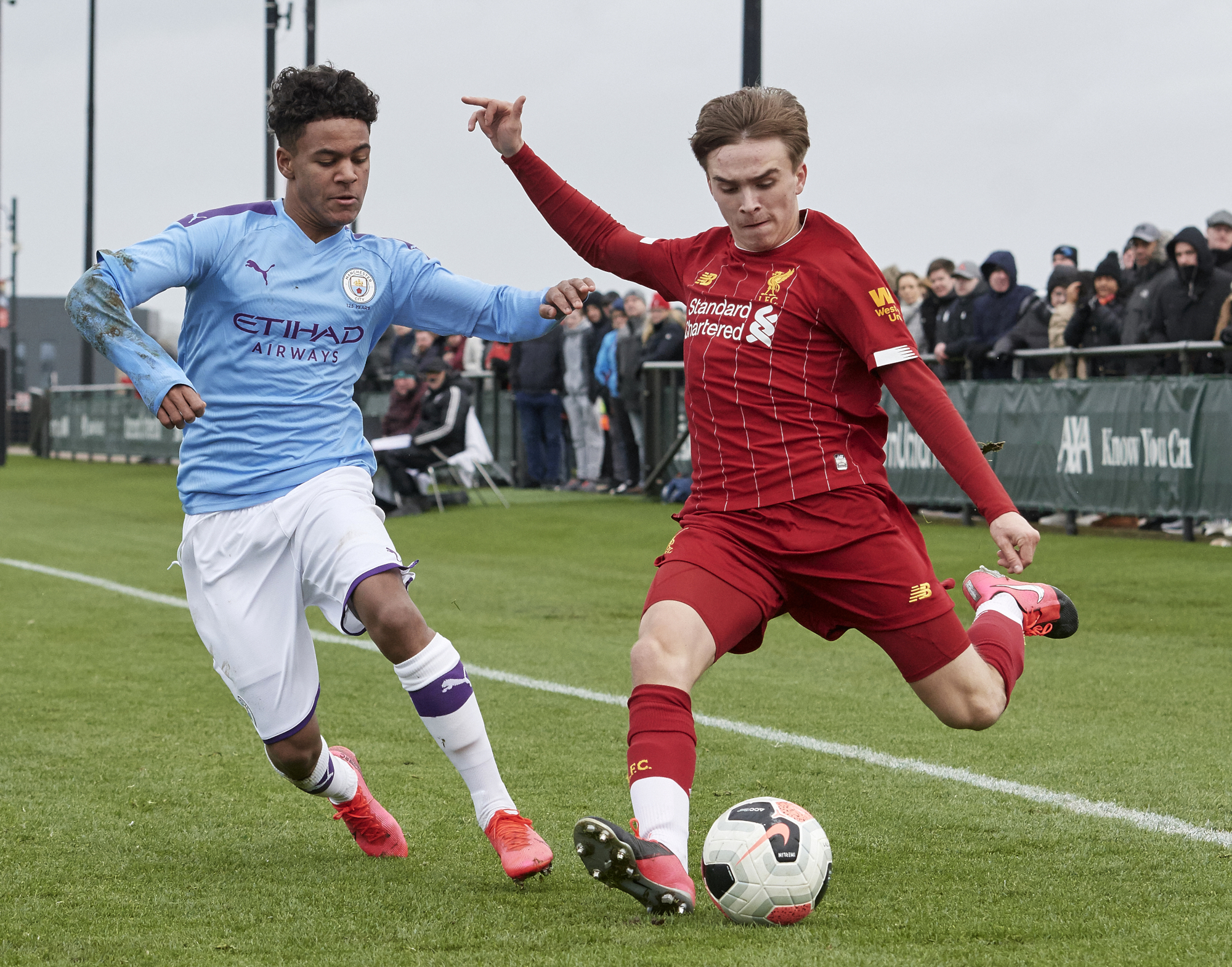 Hill blasted a loose ball high over the goalframe from a decent position at the three-quarter mark of the game – and the visitors promptly netted a third.

Another rapid counter-attack, on 73 minutes, ultimately concluded with substitute McAtee swapping passes with Edozie and coolly lifting a finish over Ojrzynski for 3-0.

But it was far from game over.

Liverpool responded almost immediately, Hill taking advantage of City hesitancy at the edge of their own box to rifle a rising effort into the roof of the net – his ninth goal of the season – to provide a glimmer of hope.

O’Rourke hooked wide from a deep Norris cross and saw a penalty appeal rejected before the home side made it 3-2 with seven minutes left to play.

Woltman had only been on the pitch for two minutes when he received Norris’ cut-back and dispatched an excellent finish into the top corner.

The Reds sensed more was possible but City put the game to bed with 88 on the clock. Palmer broke in behind, took the ball around Ojrzynski and slotted home to settle an absorbing top-of-the-table showdown.