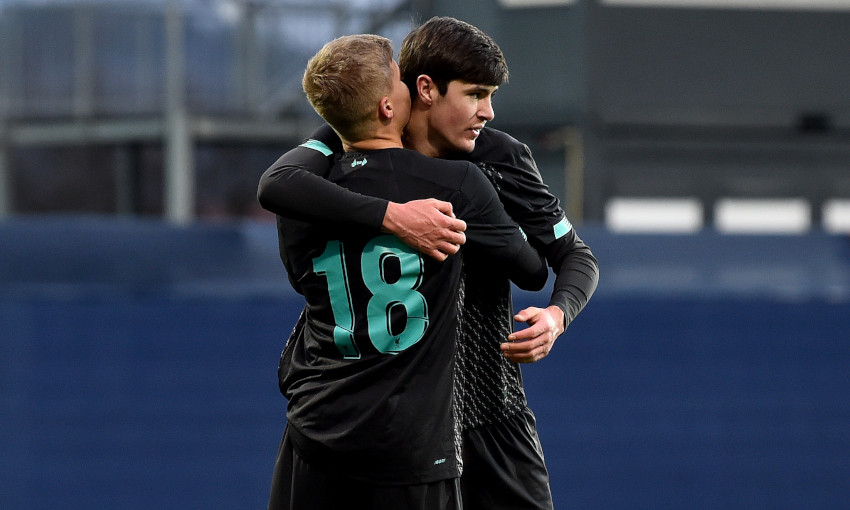 Liverpool U18s came from a goal behind to snatch a late 2-1 victory over Stoke City in their U18 Premier League encounter on Saturday morning.

The young Reds trailed just one minute into the game but held firm to level before the break, through Layton Stewart’s cool finish, and then grabbed three points when substitute Conor Bradley headed in four minutes from time.

Barry Lewtas’ side therefore maintained their pursuit of league leaders Manchester City, who they continue to trail by five points having played one match fewer.

Liverpool endured the worst possible start as the hosts took the lead after only 61 seconds.

A free-kick won high on the right flank was sent to the far post and guided back across the face of goal, where Andre Godfrinne was on hand to simply nudge the ball into an exposed net.

Jack Bearne almost put an equaliser on a plate for Stewart with 10 minutes played, but his sweeping cross from left to middle just evaded the Reds striker in the box.

Stewart then broke in behind the Stoke backline moments later and found a way around the stranded goalkeeper at the edge of the area, only for defender Mohamed Akandji to recover and block his subsequent shot from an angle.

It was the home side who enjoyed the better of the opening half, however, and their captain, Patrick Jarrett, twice drew a save from Jakub Ojrzynski with efforts from the edge of the area as the break loomed.

But there was still time for Lewtas’ team to level the score.

They did so with a lovely goal. Tyler Morton threaded a deft pass between the opposition defence to invite Stewart into a one-on-one and the 17-year-old capitalised courtesy of a sure, dinked finish over Nathan Broome.

There were half-chances at either end when the second period got under way – Stoke perhaps creating the more dangerous sights – and Ojrzynski was called into action again before the hour.

Tom Sparrow, who had previously seen a side-footer blocked on its route to goal, struck a rising shot from 20 yards that the Liverpool ‘keeper carefully palmed away.

With Akandji a constant obstacle to the visitors’ forays forward, much of the pressure was mounted by the Potters in the search for a winner – and they went close in the final stages.

Reece Jones’ surging run from his own half caused problems for the Reds and the ball was eventually moved to Jai Verma in the left channel. His attempt to clip a finish into the opposite corner went wide.

Instead, Liverpool scored a second.

Morton’s swinging free-kick from the right-hand side was plum for his waiting teammates in the box and substitute Bradley got enough on his header to nod the ball through the grasp of Broome and secure three points.