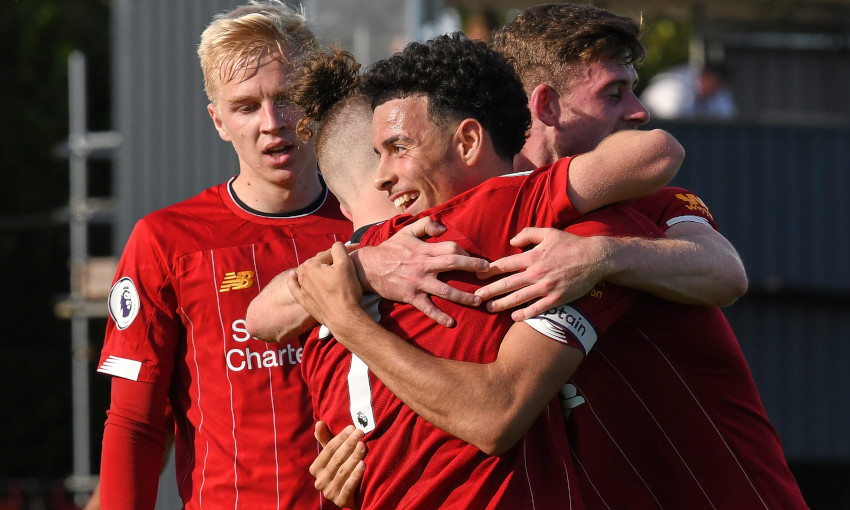 Liverpool U23s recorded an impressive 5-3 away victory at Brighton and Hove Albion in Premier League 2 on Friday afternoon.

Neil Critchley’s side were 4-0 up for the majority of the game at the AMEX Elite Performance Centre with Curtis Jones (two), Harvey Elliott, Isaac Christie-Davies and Luis Longstaff all on the mark.

The young Reds made the perfect start when they were awarded a penalty after seven minutes.

A superb run down the right flank by Elliott saw him brought down by Peter Gwargis.

The No.7 duly picked himself up to confidently place the ball beyond the reach of Thomas McGill from the resulting spot-kick.

Elliott came so close to doubling the advantage four minutes later. A Pedro Chirivella cross from the left saw the 16-year-old attempt a spectacular overhead kick, with his effort landing just wide of the post.

But it was 2-0 on 18 minutes. A surging run into the box by Elijah Dixon-Bonner saw the ball fall to Christie-Davies and the Wales U21 international sent a curled finish into the back of the net.

Chirivella then hit the bar with a header from close range after being picked out by Elliott.

Critchley’s charges were playing some excellent football with Elliott and captain Jones causing all sorts of problems for the Brighton backline.

And on 29 minutes, after another lovely run, Elliott’s goalbound effort was pushed onto the post by the goalkeeper.

Sixty seconds later, an inviting through ball from Christie-Davies found the run of Jones, who was denied at his feet by McGill.

Longstaff did make it 3-0 on 39 minutes, though, sweeping home a sweet header following a fine cross from Christie-Davies.

Their fourth of the afternoon came four minutes into the second half.

A Christie-Davies through ball released Jones and he ran through, kept his composure and slotted the ball beyond the reach of McGill.

Tom Clayton was unfortunate not to net a fifth goal when he glanced a header narrowly wide from a Yasser Larouci cross.

Instead, the home side struck back twice in the closing stages.

Jones was so close to making it 5-2 towards the end as he twisted and turned his way into the box but his hit cannoned against the bar.

However, the U23s skipper was not to be denied and he did grab his second goal of the game in stoppage-time with a coolly executed finish.

The scoring was still not over, though, and Radulovic made it 5-3, but the points were in the bag for Liverpool.

Reflecting on the win, Critchley told Liverpoolfc.com: “For 77 minutes of this game we were excellent and were well worthy of being 4-0 up.

“We then showed our inexperience in the last 15 minutes and I was disappointed with the way we ended the game. We need to see out the game better than that.

“That doesn’t take away, though, some of the outstanding football and passing moves we put together and we were worthy winners on the day.”