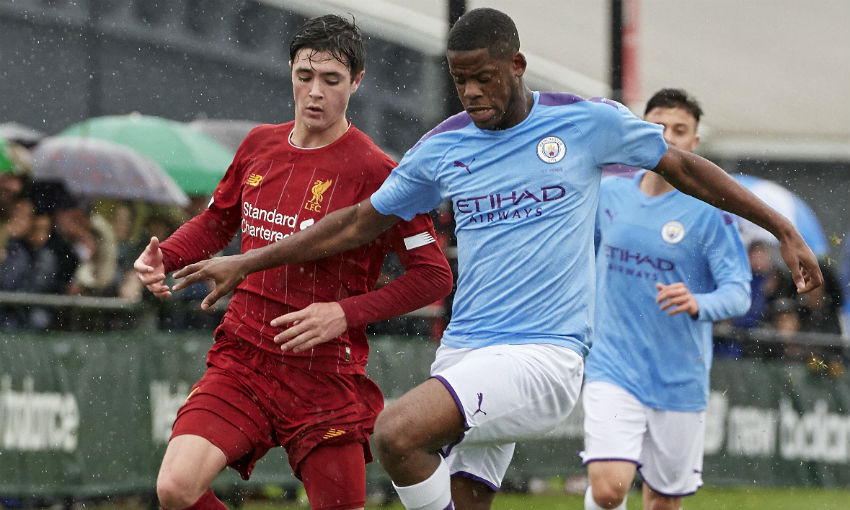 Liverpool U18s endured a difficult afternoon as they were beaten 4-0 by Manchester City in the Premier League Cup on Saturday.

The young Reds suffered defeat at a rain-soaked Kirkby Academy in their second match in the group phase of the competition.

Cole Palmer broke the deadlock in the 45th minute before City took control of the affair with second-half goals from James McAtee, Alex Robertson and a trialist.

In testing conditions, the match sprung into life in the 21st minute. Liverpool goalkeeper Jakub Ojrzynski did brilliantly to deny Samuel Edozie after the City No.11 broke into the penalty area.

Liverpool went up the other end as James Norris tested the alertness of Ciaran Slicker before Tyler Morton saw his acrobatic bicycle kick claimed by the City stopper.

City looked certain to go in front five minutes prior to the eventual opener. Palmer was on the end of a cutback, but Ojrzynski quickly got across to push away his goalbound shot.

But in a similar situation on the stroke of half-time, Edozie pounced on a loose ball and crossed for Palmer, who this time made no mistake with the finish.

City flew out of the blocks in the opening stages of the second period, adding to their lead with 51 minutes on the clock.

The visitors broke away from a free-kick and mix-up at the back saw Cole run through on goal. The opening goalscorer unselfishly opted to pass to a teammate, leaving McAtee free to tap in and make it 2-0.

Six minutes later, Robertson picked up the ball just outside the box and rifled an effort into the bottom corner.

Leighton Clarkson went close to pulling one back for Liverpool in the final stages, but Barry Lewtas' side were unable to reduce the arrears as the City trialist added a fourth deep into stoppage time.