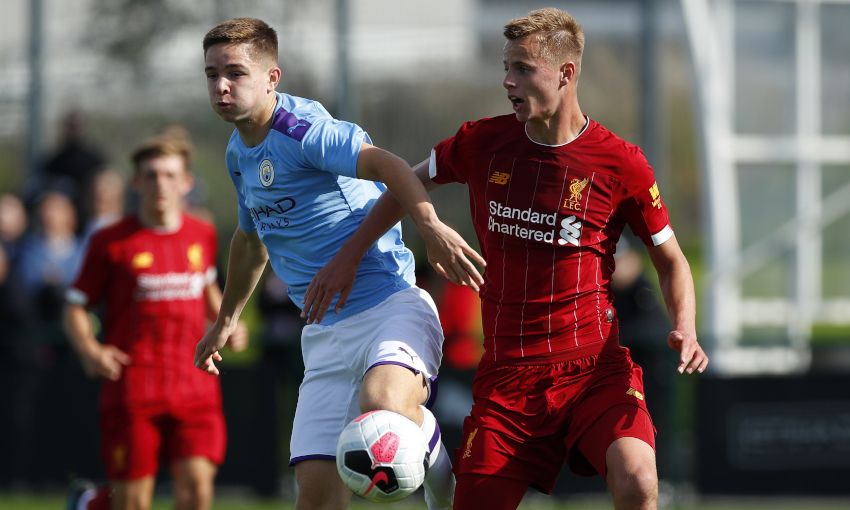 Liverpool U18s were beaten 5-2 in a top-of-the-table clash with Manchester City at the Academy Stadium after what was the archetypal game of two halves.

The young Reds dominated the first period with goals from Jake Cain and Niall Brookwell - and could have been out of sight inside the opening 25 minutes.

But they were left to rue their missed chances as City hit back strongly after the break to stretch their lead at the top of the league.

The starting line-up saw Brookwell drop into a back three for the Reds with wing-backs Jack Walls and James Norris pushed higher.

The formation seemed to help Barry Lewtas’ side press high on a City team determined to play out from deep, and the opening 25 minutes were characterised by Liverpool winning the ball and creating chances.

Leighton Clarkson was the next to latch onto a loose pass, also feeding Hill, whose shot was this time sliced wide.

A superb team move by Liverpool culminated with Clarkson arriving to a lay-off but his attempt was just over as the visitors continued to create all the chances.

The Reds had a penalty shout when Walls played in Hill down the right and he looked to be pulled down as he burst into the box – but the referee waved it away.

Further opportunities for Clarkson and Hill failed to hit the net but the breakthrough finally arrived on 22 minutes.

Cain’s left-footed curler from 20 yards was his third goal of the season and gave Trafford no chance.

City stirred and it needed a fantastic clearance from Walls to maintain the lead from under his own posts after the hosts won a header at a corner.

Their equaliser arrived on 34 minutes, though. The Reds failed to clear, allowing James McAtee to burst into the box and finish well past debutant goalkeeper Jakub Ojrzynski.

City required an unbelievable double block on the line to deny Remi Savage and then Stewart but the Reds were still able to regain the lead just before the break.

Billy Koumetio won the ball at the back post from a corner and Brookwell was on hand to turn it home with his head on 45 minutes.

The second half was a different proposition as City found their stride.

Impressive striker Liam Delap had already rattled the post with a powerful shot when he finished from close range on 49 minutes to make it 2-2.

Stewart and Koumetio went close for Liverpool but City were ahead just after the hour mark. Delap latched onto a long pass, closed in on goal and finished cleverly for his second of the game.

Home substitute Jamie Bynoe-Gittens hit the post and the fourth came soon after for the home team, through captain D’Margio Wright-Phillips with a shot from distance.

Bynoe-Gittens gained compensation for his earlier miss on 79 minutes when he rounded Ojrzynski to score the fifth after more good work from Delap.