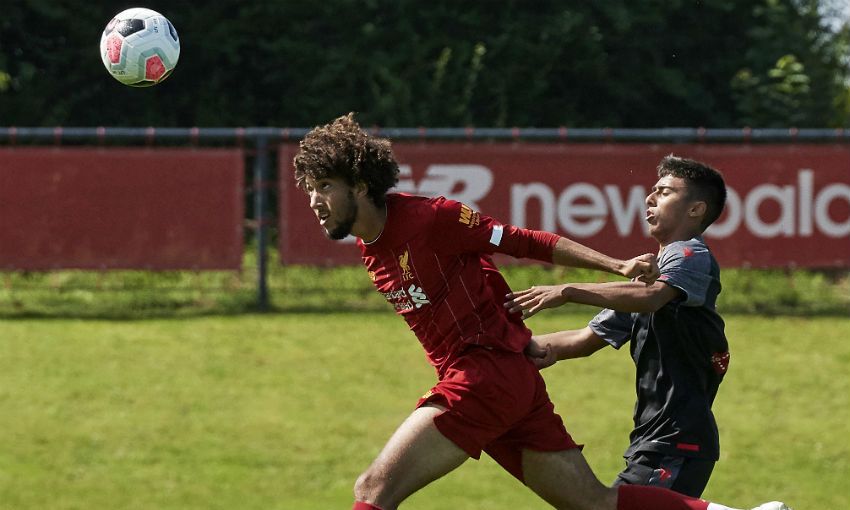 Remi Savage scored an injury-time header to rescue a point for Liverpool U18s in a 1-1 draw with Wolverhampton Wanderers on Saturday afternoon.

The defender rose highest at the back post to nod in Leighton Clarkson's corner kick with 92 minutes on the clock at the Sir Jack Hayward Training Ground.

It was the least Barry Lewtas' side deserved after Chem Campbell opened the scoring from the penalty spot in the 44th minute.

The visitors made a blistering start and could have been awarded a spot-kick of their own after just 45 seconds of action.

Niall Brookwell felt he had been tripped up inside the penalty area, although the referee did not agree and waved away the midfielder's appeals.

Liverpool were undeterred by the decision, though, and enjoyed the majority of possession, winning the ball back countless times after applying a high press.

The Reds' best chance of the first half arrived on the half-hour mark. James Norris' lofted cross from the left was met by Layton Stewart, who headed agonisingly wide.

But for all the pressure, on a later counter-attack, Wolves fired their first warning shot when Campbell advanced into the Liverpool penalty area and dragged a shot across goal.

Minutes later, a similar situation arose. Campbell was again bearing down on goal and this time brought down by Jarell Quansah in the box, with the referee pointing to the spot.

Campbell dusted himself off and converted the spot-kick to ensure the hosts entered half-time in front.

Liverpool returned from the break determined to make their dominance count through Clarkson's pinpoint delivery.

His corner kick found the leaping Quansah, who flicked a header onto the far post. Clarkson, who spent time training with the first team at Melwood this past week, then sent in another cross that Stewart was just inches away from poking into the net.

With five minutes remaining, Fidel O'Rourke did manage to get on the end of a whipped Clarkson pass, but was denied by a fine save from Wolves stopper Joe Young.

At the other end, Ben Winterbottom saved from substitute Lee McLoughlin to ensure it stayed 1-0.

That intervention proved vital when Liverpool were awarded a corner in the dying seconds. Clarkson took responsibility once again and targeted the towering Savage as he found the back of the net to maintain the Reds' unbeaten start to the campaign.