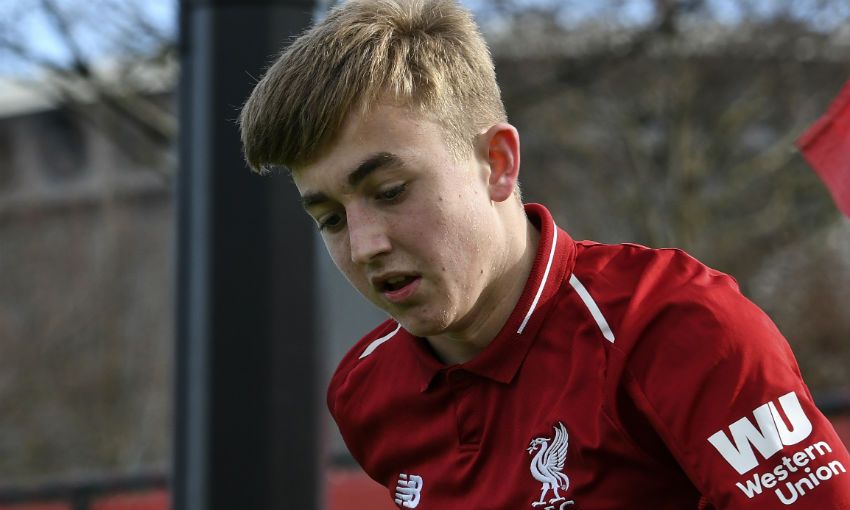 Liverpool U18s began their league season in impressive fashion with a stunning 7-1 away victory over Blackburn Rovers.

Doubles from strikers Layton Stewart and James Balagizi, plus two from midfielder Tom Hill and a Jake Cain strike, saw the young Reds to a decisive win despite difficult weather conditions.

But a young side started impressively with full-backs James Norris and Jarell Quansah getting forward well.

Liverpool took the lead on eight minutes with Stewart pouncing on a loose ball to head home after Cain’s header had been fumbled by the Blackburn goalkeeper.

Ten minutes later and the lead was doubled. A fine Clarkson pass put Matteo Ritaccio in on goal but when his effort was saved Hill was on hand to head home.

Reds goalkeeper Ben Winterbottom was a spectator for most of the opening half-hour but was on hand to deny his former Blackburn colleagues on 32 minutes when he turned away a goal-bound drive from Jalil Saadi.

The second half started well for the hosts and they reduced the deficit on 52 minutes when Jared Harlock slid home a good cross from Luke Brennan.

Any hopes of a comeback lasted just six minutes, however, when the visitors extended their advantage.

A good turn from Hill in midfield allowed him to play in Balagizi and he opened his body well to direct a right-foot shot into the bottom corner.

The big striker didn’t have to wait long for his second, slotting home impressively after a perfectly timed pass from Cain on 64 minutes.

Winterbottom made a flying stop to deny Blackburn sub Zak Gilsenan but it was at the other end where more goals would come.

A spell of possession ended with an incision on the left and when the ball was cut back Cain swept home the goal of the game with just over five minutes left.

Stewart grabbed his second with a delicate lift over the goalkeeper two minutes later and Hill rounded off a fine display with a low left-foot effort into the corner on the stroke of full-time to bring up a magnificent seven for Barry Lewtas’ team.