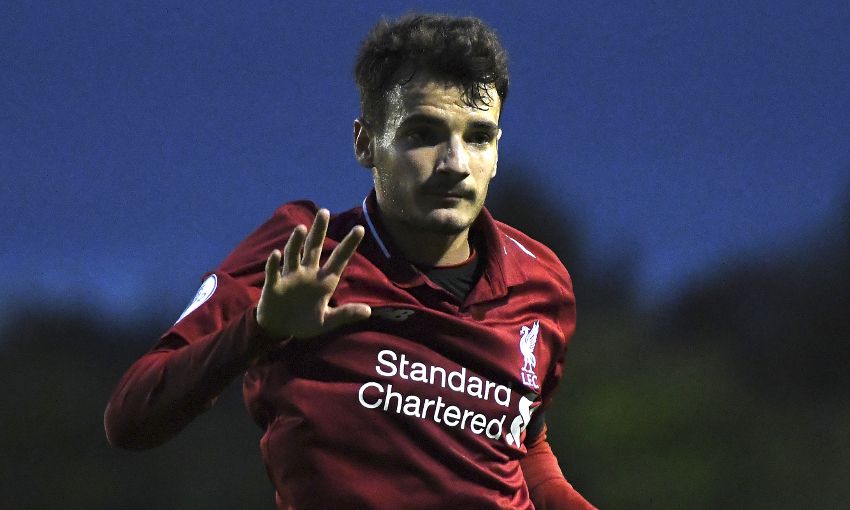 Liverpool U23s were denied a winning finish to 2018 by a 92nd-minute equaliser and an even later penalty save in a dramatic 1-1 draw with Swansea City in Premier League 2 on Monday night.

Neil Critchley’s team created a string of chances at Landore Training Centre but were unable to convert their dominance into an advantage on the scoreboard until the 65th minute.

The breakthrough came via an assured side-footer from Pedro Chirivella, which looked likely to secure victory in the young Reds’ final outing of the calendar year.

But Liam Cullen breached the Liverpool defence in stoppage-time, smacking a volley past Caoimhin Kelleher to snatch a point for the home side, and Chirivella had a spot-kick saved with 97 minutes on the clock.

Liverpool might have taken the lead within three minutes.

Determined pressure by Isaac Christie-Davies in Swansea territory saw the No.10 steal the ball from Brandon Cooper and feed Liam Millar to his right inside the box, but the striker’s angled drive was repelled by the goalkeeper.

That chance proved the highlight of the opening half-hour, which was otherwise punctuated only by hopeful efforts off target by Adnan Maric and Cullen.

The stasis was broken during an eventful final 10 minutes of the opening 45, however, and Liverpool had no fewer than five clear opportunities to break the deadlock in that period.

A marauding run into the box by the unlikely figure of Conor Masterson ended with a save at his feet by Steven Benda before Christie-Davies headed Neco Williams’ subsequent cross wide to the left from a good position eight yards out.

Perhaps caught by surprise, Chirivella nodded the wrong side of the right post when confusion reigned in the hosts’ area and Benda was left stranded out of his goal.

A sublime passing routine then rapidly moved Liverpool from the halfway line into shooting range but Curtis Jones ultimately lifted his finish over the crossbar from close range.

And there was still time in the half for Chirivella to thump a fine volley inches too high after George Johnston had cutely headed a right-wing corner back to the ‘D’.

Swansea started brightly after the interval but again it was Liverpool bemoaning the quality of their final ball just before the hour mark.

A clever turn at the edge of the box by Chirivella, followed up by a firm tackle, freed Christie-Davies on the byline but his pull-back eluded at least three teammates waiting in the middle.

The visitors finally found the breakthrough on 65 minutes.

Adam Lewis’ skill and perseverance along the left preceded a deep cross that Williams kept in play and Millar touched back to Chirivella for a classy, planted strike inside the right post.

It seemed the Spaniard’s goal would separate the sides at the final whistle, especially when Maric was dismissed for unsporting behaviour in the closing stages.

But there was incredible drama during the six minutes added on.

Cullen whacked an excellent, equalising volley into the far corner from the left when Oliver Cooper’s cross was cleared out to the edge of the Liverpool box.

Yet the Reds could still have restored their advantage after they were awarded a penalty for Joe Lewis’ foul on substitute Matteo Ritaccio.

Chirivella’s spot-kick to the left was brilliantly palmed around the post by Benda at full stretch, though, and the immediate full-time whistle meant a point apiece.