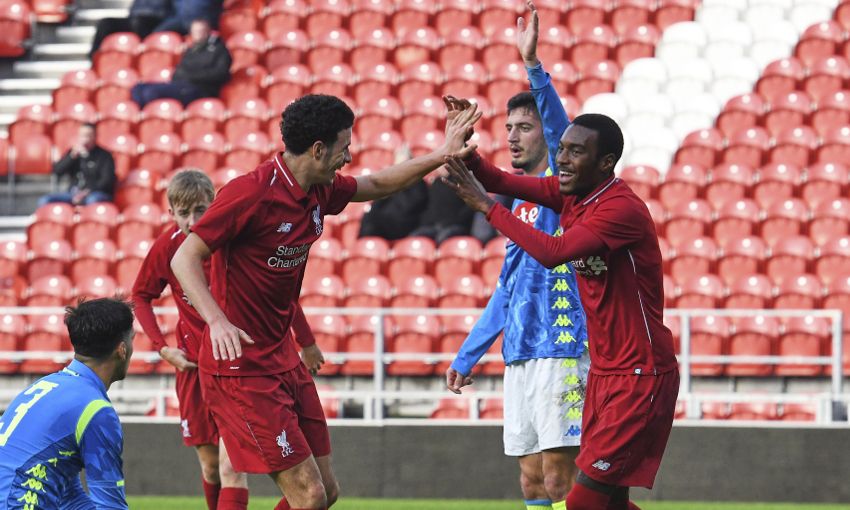 Liverpool U19s secured their place in the last 16 of the UEFA Youth League and progressed as Group C winners with a thoroughly impressive 5-0 rout of Napoli characterised by moments of individual brilliance.

Rafael Camacho, Liam Millar, Paul Glatzel, Curtis Jones and Bobby Duncan all found the net and it could have been more if not for the offside flag and an outstanding display from visiting goalkeeper Alessandro D’Andrea.

Barry Lewtas’ side went into the match guaranteed of at least second place in Group C and a play-off, but knew a win would secure direct progress to the next phase courtesy of their superior head-to-head record over qualification rivals Paris Saint-Germain, who kicked off two hours later away to Red Star Belgrade.

This was the reverse of October’s clash in Italy, when Bobby Adekanye’s strike was cancelled out by Gianluca Gaetano’s controversial late leveller. 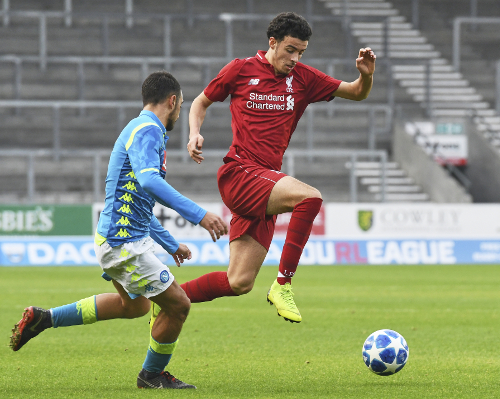 Liverpool made an assertive start in St Helens and came close twice in the first 10 minutes, Jake Cain’s powerful low drive from distance forcing D’Andrea to palm around the post before Jones jinked in off the left wing and swerved a shot narrowly wide of the far corner.

D’Andrea had more work to do in the 13th minute, with Glatzel – fresh from his hat-trick against Southampton for the U18s at the weekend – collecting a Cain pass inside the box and firing towards the bottom left corner, but the Napoli ‘keeper again saved impressively.

Millar was next to threaten with the clearest opportunity thus far, side-footing over an open goal at the back post from a typically inviting Adam Lewis delivery.

D’Andrea looked less assured in the 33rd minute when he tore out onto the left wing and brought down Camacho, picking up a yellow card, and it would be Camacho who gave the young Reds a richly merited opener a minute later.

Glatzel and Millar combined nicely down the right, Jones manoeuvred into space and struck a shot which was deflected towards the back post, where Liverpool’s top scorer in the UEFA Youth League was waiting to notch his fourth of the campaign.

Lewtas’ charges were threatening to run away with it. Jones, seeming more confident than ever after his time spent at Melwood with the first team, forced yet another D’Andrea save following a one-two with Camacho.

The second goal did arrive just before the break, Millar making up for his earlier miss by knocking in the rebound when D’Andrea parried Camacho’s right-wing cross. The 19-year-old Canadian had seen another effort ruled out for offside moments earlier. 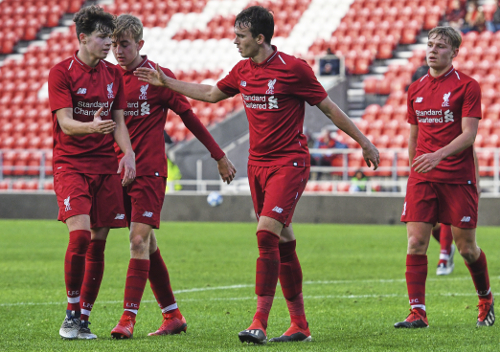 It took only 120 seconds of the second half for Liverpool to register again, Glatzel with the pick of the goals so far – a resounding finish in off the bar after a slick one-two with Millar.

The Napoli defence were pulled apart again almost immediately, Jones gathering on the right side of the penalty area, beating his man and drilling under D’Andrea with his left boot.

Substitute Luis Longstaff nearly added a fifth late on, moving in off the right wing and curling just wide after a series of step-overs.

Glatzel had been replaced by his partner in crime from the U18s, Duncan, and unsurprisingly the in-form 17-year-old made his presence felt, swivelling on the edge of the box and pinging an unerringly accurate low shot into the bottom left corner with four minutes remaining.

So, having successfully negotiated the group stage for the second year running, Liverpool will discover their last-16 opponent when the draw is made on February 22, with the tie to be played on March 12/13.