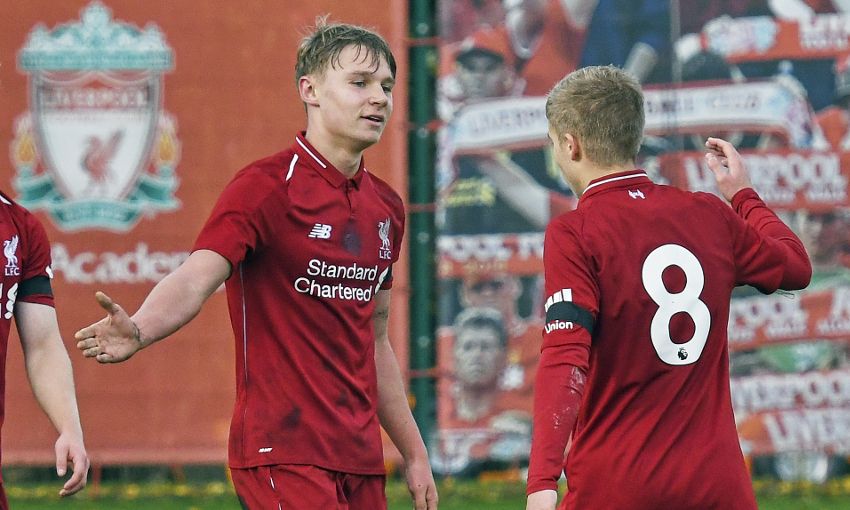 Paul Glatzel grabbed a hat-trick as Liverpool U18s rubber-stamped their place in the quarter-finals of the Premier League Cup with a 3-0 win over Group B rivals Southampton at the Academy on Saturday.

Having already beaten Stoke City 4-2 and Reading 6-0 in their opening two matches, Barry Lewtas' side were all but through as group winners; only defeat and an eight-goal swing could have knocked them off top spot.

But the young Reds sealed their progress in style on a rain-swept morning in Kirkby as Glatzel converted from the penalty spot just before the break and added two more during the final 15 minutes of the match to secure a comfortable victory.

Liverpool started well, with Abdi Sharif finding space between the lines and the No.7 mustered the first two shots of the tie. His second, a snap hit from the edge of the box with 13 minutes gone, was turned smartly around the post by the alert Southampton goalkeeper.

The Saints No.1 was called into action again moments later to deny Leighton Clarkson, whose dipping free-kick stung his hands.

The Reds midfielder remained eager to carry the fight to the visitors and when he next picked the ball up, he drove at the opposition defence and fired a low, 20-yard shot just wide of the left post.

It felt like a goal was coming for the hosts and, after Fidel O'Rourke and Jake Cain had both been denied, it duly arrived with 43 minutes gone.

Glatzel tussled with his marker to control a high ball in the box and was hauled down. The No.9 picked himself up, dusted himself down and dispatched the resulting penalty into the bottom corner to give his side the lead.

The second half started much as the first had finished as the Reds continued to pepper the Southampton goal, Sharif and Glatzel testing the ‘keeper with long-range efforts within the first 10 minutes of the restart.

Then, after striking the side-netting of Vitezslav Jaros' goal on the counter-attack, Saints rallied and enjoyed their best spell of the match as substitute Enzo Robise brought added pace and guile on the left flank.

His tricky play won a free-kick just outside the box after 67 minutes, but he fired the effort high and wide.

Liverpool responded through Glatzel, who twice went close before getting the second goal his attacking endeavour deserved.

Bobby Duncan played his fellow forward into the box on 74 minutes, allowing the striker to turn and fire into the back of the net for 2-0.

And his hat-trick goal followed 10 minutes later when he reacted quickest to a loose ball in the box.

Left-back Remi Savage made one of his forward forays and appeared to be felled as he cut into the opposition area. As the young defender appealed for a penalty, Glatzel pounced on the ball and lifted a shot over the advancing ‘keeper as he was falling backwards to make it 3-0.

Lewtas' side now go into the quarter-finals of the Premier League Cup, along with five other group winners and the two best runners-up.