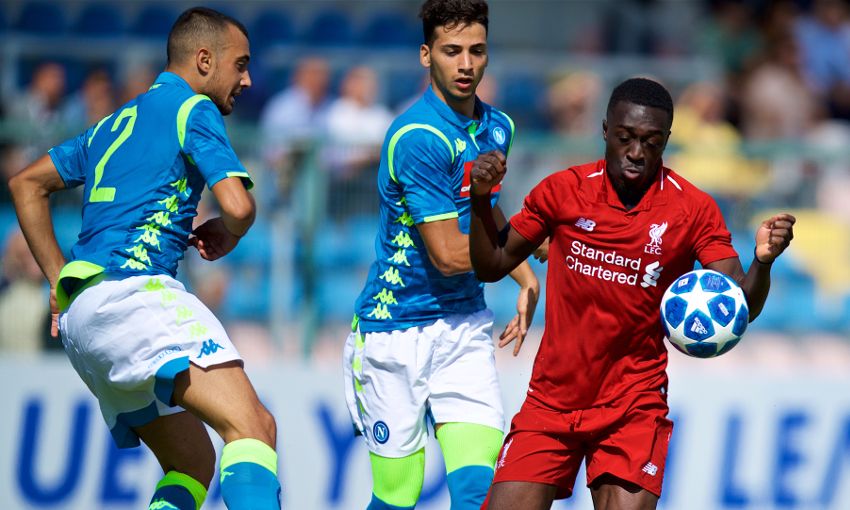 Liverpool U19s were denied a second successive win in the UEFA Youth League by a late Napoli equaliser in a 1-1 draw on Wednesday afternoon.

Bobby Adekanye, who limped off later in the first half, looked to have scored the only goal of a game that the young Reds dominated for long periods at Stadio Ianniello.

But the home side produced a controversial leveller four minutes into stoppage-time.

With Liverpool under the impression there was a pause in play from a throw-in, Napoli raced through to force the ball in via Gianluca Gaetano and the goal stood.

Barry Lewtas’ team now lead Group C by one point from Paris Saint-Germain, who beat Red Star Belgrade 2-1 in the day’s other fixture. 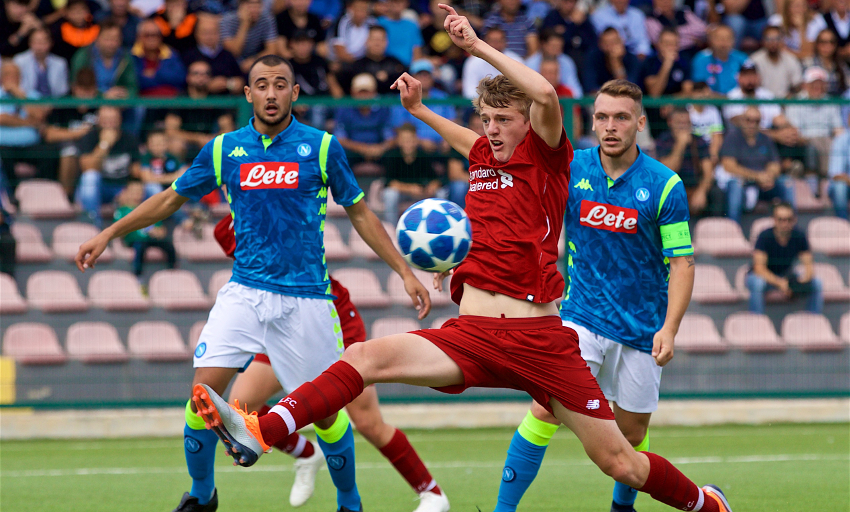 A cagey start to the encounter from both sides in Naples saw little action of any note occur for the majority of the opening 20 minutes.

When the game did come to life, it was Liverpool providing the spark. Tom Clayton was agonisingly unable to connect when Adam Lewis spun a cross into the opposition box and found the No.5 unmarked.

The glimpse of goal energised the Reds, however, and shortly after Curtis Jones was crowded out as he shaped to shoot from the edge of the box, the Scouser created their opener.

Paul Glatzel cushioned a knock forward back to Jones, who lifted an inviting pass into Adekanye’s run into the Napoli area. There was a hint of fortune for the 19-year-old as his touch moved the ball over the goalkeeper but he took full advantage with a simple tap-in.

Luck soon turned against the forward, though. Despite trying to shake off an injury, he was forced off 10 minutes before the interval and replaced by Luis Longstaff.

And they were grateful to goalkeeper Vitezslav Jaros for an excellent save to preserve their lead at the break.

Two minutes into added time at the end of the first half, Filippo Perini drove in a shot from close range that the Liverpool stopper thwarted with his body.

Lewtas’ side were on the receiving end of more excellent goalkeeping, this time from opposite number Alessandro D’Andrea, just moments after the match resumed for the second half.

Neat footwork from Rafael Camacho 20 yards out created space for a curler that was pushed into the path of Glatzel – but D’Andrea recovered well to somehow block the follow-up.

Chances dried up again but the Reds might have put the match to bed in the final stages.

Substitutes Bobby Duncan and Leighton Clarkson combined – the former releasing the latter with a clever reverse pass into the box – but his efforts were denied on the line by D’Andrea and then Niccolo Bartiromo.

Napoli squandered a presentable opportunity when Alessandro Zanoli headed wide from a corner nine minutes from time, but there was still to be a twist.

In the final seconds of the game, Liverpool hesitated with two balls on the pitch and the hosts capitalised on the confusion through Gaetano to snatch a point despite protestations.