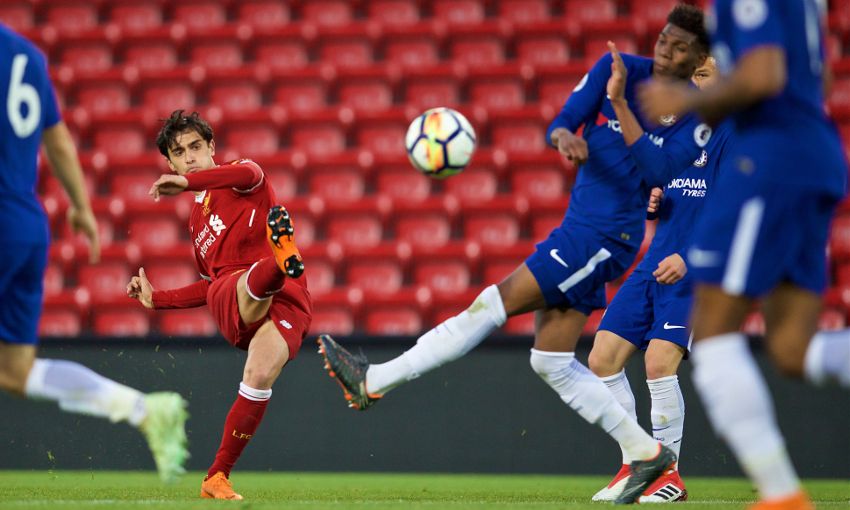 Yan Dhanda achieved a very special personal target when he curled home a brilliant goal in front of the Kop to cap off Liverpool U23s' 5-1 victory over Chelsea.

The young Reds confirmed second place in Premier League 2 courtesy of the memorable result at Anfield on Tuesday night, with the final flourish coming from the forward.

Dhanda had already converted a penalty at the same end, while George Johnston (two) and Bobby Adekanye were also on target for Neil Critchley’s side.

But the icing on the cake, individually and collectively, came in the fourth minute of stoppage-time when the 19-year-old whipped in an outstanding 20-yarder.

“I’m glad it went in, I’ve imagined scoring a goal like that in front of the Kop for ages. So it’s good to finally score it,” he told Liverpoolfc.com after the final whistle.

While Dhanda’s name is no surprise on the scoresheet, Johnston’s double imprint was an unexpected factor of a fine evening’s work for the team.

The centre-back not only notched his brace with two headers, both from Adam Lewis corners, but actually scored a goal that did not count as the aforementioned spot-kick was awarded and went close on several other occasions.

“It’s pretty exciting [to play at Anfield]. With the build-up, I was excited all day. But once you get on the pitch it goes out of your mind and it’s just like a normal game once you start playing.

“We can keep building on this season and hopefully go a step further and win the league [next season].”