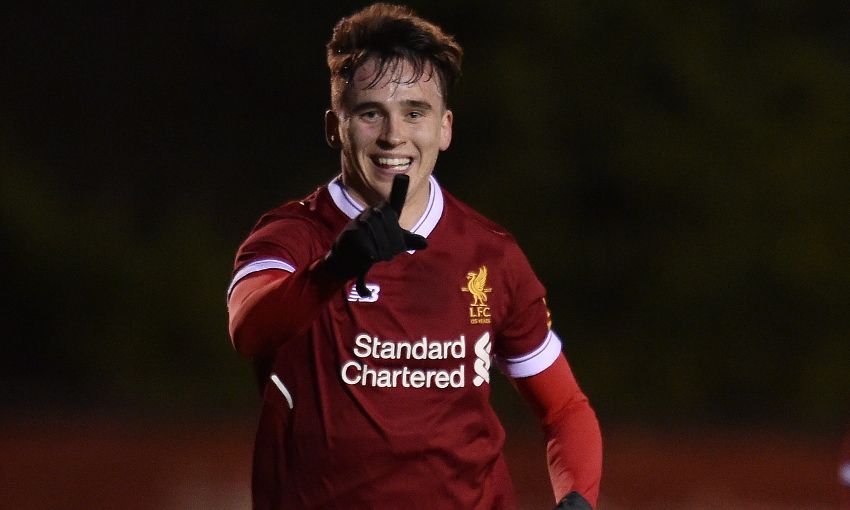 Liam Millar was on the mark as Liverpool U18s played out a 1-1 draw with Manchester City at the Kirkby Academy on Tuesday night in front of the watching Jürgen Klopp.

The young Canadian took his tally to 12 goals for the season as Steven Gerrard’s side continued their unbeaten start to 2017-18.

Keke Simmonds grabbed a second half equaliser for the away side, but the young Reds gave an excellent account of themselves against the current U18 Premier League leaders.

Reflecting on the 90 minutes, Gerrard told Liverpoolfc.com: “It was a good contest for the lads and I thought it was probably a fair result in terms of we were the better side in the first half and they came into it in the second.

“Maybe on chances we deserved a bit more out of the game but I’m not complaining with the point and a draw was probably fair overall.

“Liam scored an excellent goal to put us ahead. Elijah [Dixon-Bonner] won the ball and played a great first time pass to Eddie [Edvard Tagseth]. He then produced a great pass to find Liam who found the net. It was a great goal.

“We went into the game with belief and confidence and I’m really proud of the boys because they gave me everything, every one of them emptied the tank all over the pitch and they were excellent.

“If we had gone into the break 2-0 up I don’t think City could have complained, but to be fair to City they were better than us certainly for the first 25 minutes of the second half.

“We then came back into the game but we’ve gone toe to toe with the team at the top of the league, and that’s what makes me pleased the most because we made it a good contest and it was a really good game of football.”