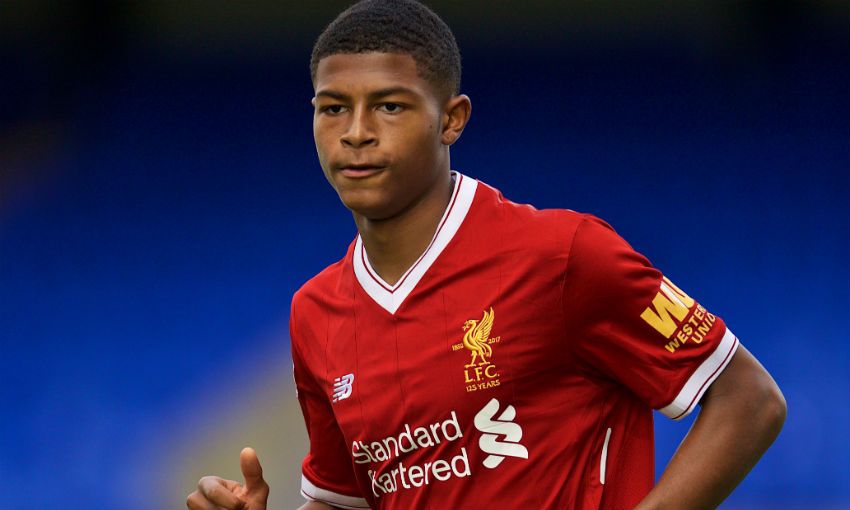 Rhian Brewster is in line to make his return to Liverpool action on Friday when the U23s take on Newcastle United at Prenton Park.

The 17-year-old was back at Kirkby on Tuesday for his first Reds training session since top-scoring as England won the U17 World Cup last month.

And he could now play a part in the U23s' next Premier League International Cup outing, which takes place at the home of Tranmere Rovers later this week.

Neil Critchley told Liverpoolfc.com: "We'll assess where he's at. We gave him a week off but that was because he'd been away for five weeks and he'd played a lot of football.

"His fitness shouldn't be too much of an issue, he was playing 90-minute games, virtually every minute of every game in hot and humid conditions.

"We'll just have to see how he is, assess him over the next couple of days to see if he is involved on Friday night but I'm sure he'll play some part in the game."

Brewster bagged eight goals in just six games - including one in a memorable final win over Spain - as the Three Lions stormed to victory in India.

And, while Critchley and the coaching staff at the Academy are delighted for their young striker, they are fully focused on ensuring that achievement doesn't transpire to be a career highlight for the youngster.

He added: "As a club, as a staff, we're all made up for him. It was a magnificent achievement for that group of players and staff that went out there and as an English coach I'm made up that the England teams are doing well and Rhian was part of that.

"But his bread and butter is here and it's a great achievement for him but in the grand scheme of things in terms of his long-term development it's only a small achievement.

"It's always: what's next for Rhian? He can't be living off the back of an U17 World Cup victory for the rest of his career.

"We want - and he does - more than that. It's great to see him back, he's a terrific boy and a credit to his family, but it's back to work now. We're looking forward to seeing how he is in the next few weeks."

Critchley doesn't expect any problems in keeping Brewster's feet on the ground after his international success, either.

He continued: "There's certainly no red carpet rolled out for him here.

"The experienced staff we've got here, good people with the right values, won't be getting carried away.

"There are a few people in the dressing room who will be keeping a lid on it so he won't be getting too big for his boots.

"He's not that type of boy anyway but, if he did, then we'd certainly nip that in the bud.

"There will be no issues with him, we'll have no problems. He'll come back in and he'll be the same happy, humble boy he was before he went away."