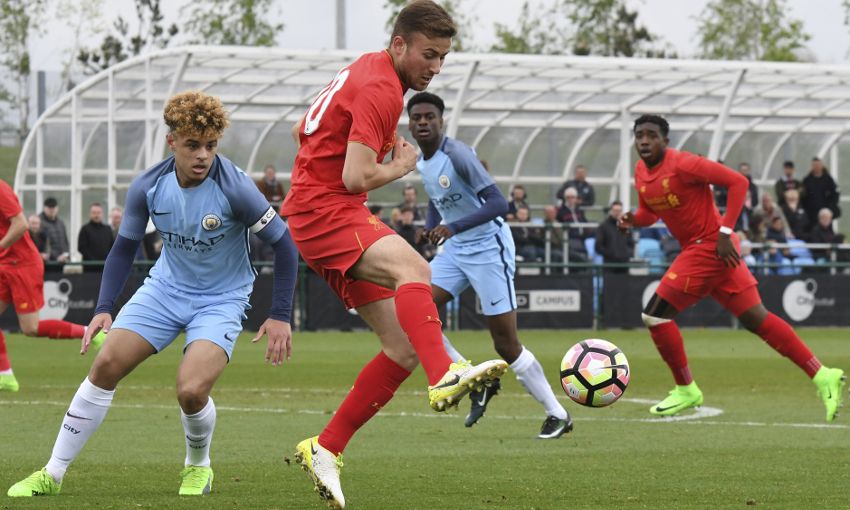 Gerrard: It's a day they'll never, ever forget

Liverpool U18s completed their 2016-17 season with a narrow 1-0 defeat at Manchester City on Saturday afternoon.

A quiet beginning to the game preceded a string of clear chances for the hosts, with one taken by the impressive Tom Dele-Bashiru shortly after the half-hour mark.

The young Reds were notably more dangerous when the second half got under way and would have returned to Merseyside with something to show for the performance had their finishing been more clinical.

The opening quarter-hour passed by without significant incident, but Liverpool’s confidence in possession did catch the eye. Herbie Kane, in particular, was often an outlet as they searched for space to exploit.

A chance was almost created on 25 minutes when Curtis Jones dinked a pass into the area for Okera Simmonds to chase, but Pawel Sokol rushed out bravely to collect the ball.

City then took control of the game, with Benjamin Garre seeing a low shot from inside the area stopped by Caoimhin Kelleher after a precise lay-up by Dele-Bashiru.

The latter took matters into his own hands in the 32nd minute to hand the home side the lead. Having controlled a long ball forward on the left flank, the forward ducked inside and planted a rolling finish past Kelleher, who appeared to be unsighted.

The Reds ‘keeper prevented City from doubling the advantage moments later, denying Lorenzo Gonzalez on the counter attack, while at the other end Conor Masterson might have done better with a glanced header from Kane’s cross.

LFCTV GO: The best of the City action

And Liverpool could count themselves fortunate that the deficit wasn’t greater at the interval.

Excellent work by Dele-Bashiru around the halfway line concluded with a threaded pass into Rabbi Matondo, whose curler beyond Kelleher thudded the right post before bouncing onto the opposite post and away.

Neil Critchley’s team could have levelled on no fewer than three occasions during the first 10 minutes of the second half.

First, a poor pass out by Sokol landed at the feet of Kane, who tried to pounce immediately, but the City goalkeeper recovered well to sprawl into the path of the shot and make amends.

Neat footwork from Jones on the right hand side then forged freedom to spin a cross to the back post, where Liam Millar could not quite connect properly from yards out.

And their roles were soon reversed as Millar clipped a brilliant delivery into the six-yard box from the left channel for Jones – but the No.7’s attempt lacked the power to trouble Sokol.

Perhaps their finest chance came on 64 minutes, though.

Well-timed pressing by Millar allowed the striker to break clear in a one-on-one situation. His low effort was initially handled by Sokol, who had to react desperately to collect the ball on the goalline after it snuck under his body.

City eventually found their footing and restored balance to the game, though they were indebted to their ‘keeper in the 88th minute to preserve the result.

An outstanding spin by Jones around 25 yards from goal was followed by a dipping drive that looked destined for the roof of the net – until Sokol stretched to tip the strike over the bar.