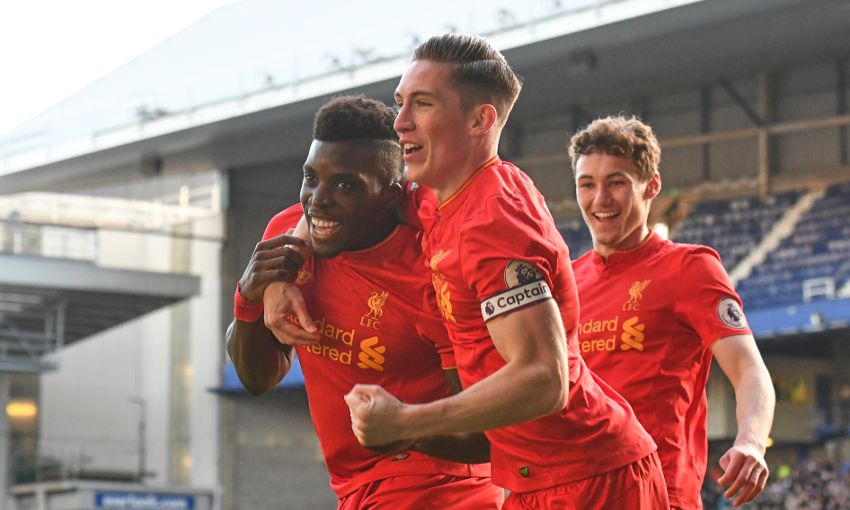 Brewster on the mark again for England U17s

Liverpool U23s brought their Premier League 2 season to an end with a hard-fought 2-1 victory over Merseyside rivals Everton at Goodison Park on Monday evening.

The Reds, who were guaranteed a third-placed finish regardless of the outcome, signed off 2016-17 in style as they defeated the champions in their own back yard thanks to goals from Sheyi Ojo and Trent Alexander-Arnold.

Calum Dyson pulled one back for the Blues courtesy of a deflection late on, but the visitors held out to secure a satisfying win over their neighbours.

Mike Garrity selected a side full of first-team experience for the trip across Stanley Park, with Ojo and Alexander-Arnold joined by the likes of Marko Grujic, Joe Gomez and Ben Woodburn in the starting XI.

But, cheered on a sizeable crowd, the hosts made the better start, with crosses from wide providing an early source of encouragement for the home fans.

One such ball into the box led to Harry Charsley heading over from a tight angle with just a minute on the clock, before Gethin Jones saw a dangerous curler miss everyone in a packed box and slip inches wide of the far post.

The Toffees' early good work was undone in a matter of seconds, though, as Harry Wilson punished Matthew Pennington's dithering on the ball, nipping in to win it and teeing up Ojo for a sidefooted finish from close range.

Liverpool almost immediately doubled their lead when Ovie Ejaria shot over after showing remarkably quick feet in the box, but Everton regained their composure after that scare to threaten more as the half wore on.

Kieran Dowell went closest for the hosts, forcing Reds goalkeeper Kamil Grabara into a sharp save with a near-post free-kick before curling another set-piece just wide as the first half neared its end.

And Alexander-Arnold had a chance to show his own quality in dead ball situations just before the break, sending Mateusz Hewelt sprawling across his goal to palm away a brilliant attempt from roughly 35 yards out.

Everton made another quick start as the game resumed for the second period, with Bassala Sambou firing in an attempt and Dowell arrowing another free-kick past the upright.

But, having spent the opening minutes of the half with their backs to the wall, the Reds produced a classy sequence of play from nowhere to double their lead.

Grujic evidenced his quality as he ghosted past his marker in midfield before driving at the Blues' defence and subsequently offered up an inch-perfect pass for Alexander-Arnold to finish emphatically.

Moments after notching a well-taken goal, the young Scouser had to show his defensive nous as he produced a brilliant sliding block in the box when Everton looked certain to score.

But Alexander-Arnold and his teammates could do nothing to stop Dyson diverting the ball in somewhat fortuitously off Nathaniel Phillips seven minutes from time to set up a grandstand finish at Goodison Park.

The Reds faced a barrage in the closing moments, with Grabara's fingertip save from a long-distance Dowell attempt the standout defensive contribution, but they held firm to ensure the campaign ended in enjoyable fashion.