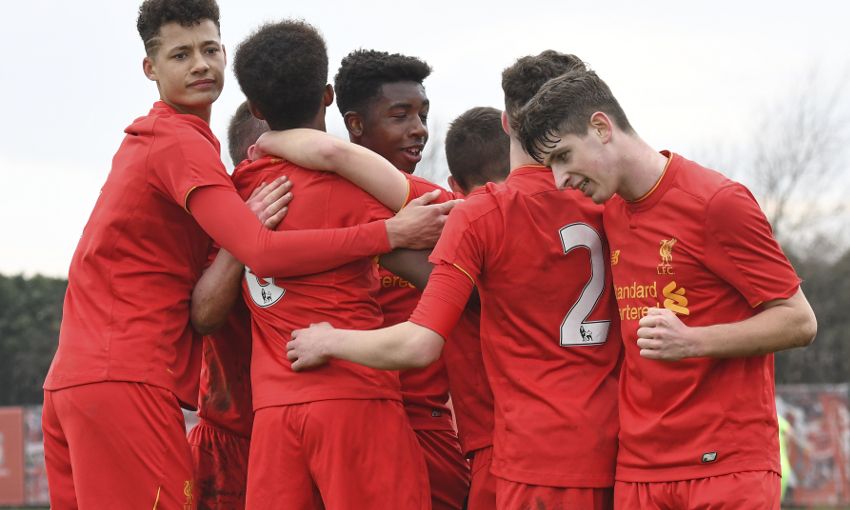 Liverpool U18s returned to winning ways with a 3-1 victory over Wolverhampton Wanderers at the Academy on Saturday afternoon.

Glen McAuley provided another glimpse of his potential in front of goal to put the young Reds ahead in the first half, but the visitors quickly drew level through Joshua Hesson’s deflected equaliser.

Neil Critchley’s team took control of the second period and despite the best efforts of the visiting goalkeeper, ultimately claimed the points through Rafael Camacho and Okera Simmonds.

After a period of exerted pressure from the home team in the early stages, McAuley opened the scoring on 24 minutes with his 14th goal of the season.

Finely taken it was too, with the 16-year-old sharply moving onto a pass over the top, striding forward into the space and placing an excellent finish into the bottom corner.

Critchley’s team – without the likes of Yan Dhanda and Conor Masterson, who are currently away with the first team in La Manga – had previously gone close on several occasions.

Camacho clipped a free-kick narrowly wide of the post, while Simmonds was twice denied by Rory Brown in the Wolves goal after promising approach play.

But the away team soon turned the tide in Kirkby.

They restored parity on the half-hour, when Hesson cut inside to create room for an effort that found its way into the Liverpool net via a deflection off George Johnston.

Momentum swung back to the Reds after the interval, though, and the outstanding Brown appeared to be on a one-man mission to avoid conceding a second.

Simmonds’ superb cross had already agonisingly evaded McAuley before the Republic of Ireland youth international was denied by the Wolves stopper having been teed up by a surging run from the captain, Liam Coyle.

Past the hour, Brown produced a double save to keep out Camacho and subsequently Jordan Hunter, and then frustrated McAuley once more with a stunning stop from his left-footer.

But the resistance was broken on 74 minutes – and it took something special.

Camacho was the source of inspiration to finally overcome Brown, who was helpless to stop the Portuguese’s thunderous drive into the top corner from 25 yards.

And Simmonds added gloss to a deserved result for the Reds with six minutes to go, tapping home a loose ball after McAuley bravely leapt with the goalkeeper to meet an inviting cross from substitute Adam Lewis.