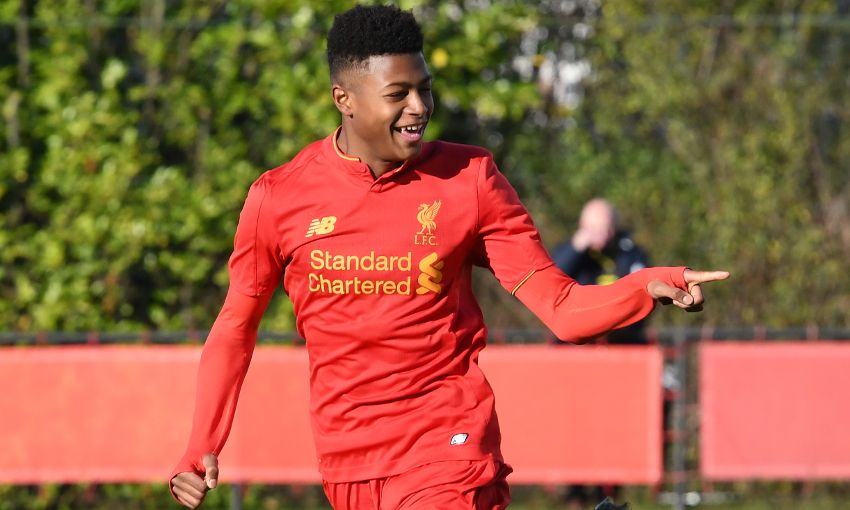 Support the young Reds against Reading at Tranmere on Sunday

Liverpool were hit by a late sucker punch as they drew 3-3 with Manchester United in an incident-packed U18 Premier League encounter on Saturday.

Goals from Rhian Brewster, Glen McAuley and Yan Dhanda looked to have set the young Reds up for a win but Callum Gribbin converted a penalty to complete his hat-trick a minute from time and ensure the game ended honours even.

Neil Critchley's team saw two penalties of their own saved at key moments and will be left scratching their heads over their failure to claim three points against their 10-man rivals.

Although the Reds carved out several promising positions in the opening stages, the visitors were enjoying a greater share of the possession.

And they made that count with just 13 minutes on the clock when Gribbin pounced after Daniel Atherton had done well to block Indy Boonen's effort from just inside the box.

Critchley's men took little time to recover from that blow, however, and were level moments later thanks to the brilliance of Brewster.

LFCTV GO: The best of the United action

The 16-year-old was unleashed on the United defence after Liam Coyle's tenacity in midfield was rewarded and sent an arrowed drive into the bottom corner before reaching the edge of the box.

The hosts' next goal owed more to some fine team play, with Dhanda slipping an eye-of-the-needle pass through the defence into the path of McAuley, who made no mistake with a low finish that completed a speedy comeback.

Liverpool had the opportunity to all but put the contest to bed just past the half-hour mark when McAuley drove into the box at pace and was adjudged to have been fouled by Jake Kenyon.

Goalkeeper Ilias Moutha-Sebtaoui was equal to Dhanda's spot-kick attempt, though, and made a straightforward save to his right to keep the visitors in it.

The importance of that stop was then underlined eight minutes before the end of the half as Gribbin calmly slotted in off the post with his right foot after finding space inside the box again.

The end-to-end nature of the contest continued into the second period, meaning Dhanda had plenty of chances to atone for his miss.

And he did so emphatically with an hour gone, lashing the ball home with his left foot after working space in the area with a drop of the shoulder.

With 10 minutes remaining, Brewster's directness presented the Reds with the chance to wrap it up, as he tempted Kenyon into committing a foul that resulted in a penalty and a second yellow card.

But the in-form forward was also denied by Moutha-Sebtaoui, whose heroics took on even greater significance in the 89th minute when Atherton brought down Joshua Bohui inside the penalty box.

Unfortunately, the Reds goalkeeper was unable to emulate his United counterpart as a well-struck Gribbin spot-kick claimed a point for the visitors at the end of a thrilling game.