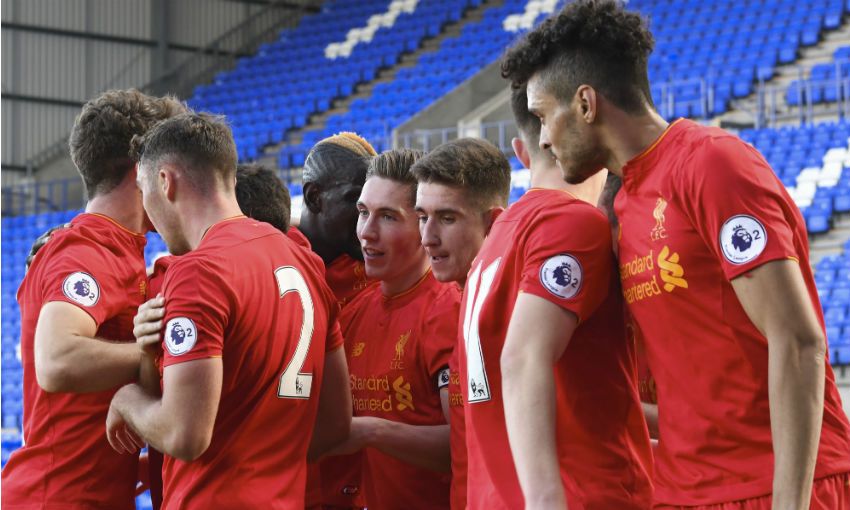 Liverpool’s U23s have impressed Jürgen Klopp this season, with the boss believing that Michael Beale’s team are benefiting from playing together regularly.

Klopp outlined his plans to change the way the club uses the loan system back in January, saying that Academy prospects should develop their talent at Kirkby or Melwood rather than moving elsewhere on a temporary basis.

Beale’s side have started the 2016-17 campaign impressively, with yesterday’s mini-derby victory over Everton meaning they have lost just one of their last eight competitive games.

Klopp watched the U23s’ 4-0 rout of Leicester City from the Prenton Park stands last month, and is satisfied with the results of the decision to keep more of the Reds’ youngsters at the club.

“It’s good, really good. We spoke a few months ago about how we should change a little bit the second team, the U21s/U23s,” he said.

“There are a lot of players that need to stay here and use another year they play together in a really good team. They can get results, they can score goals and win games - plus [they get] the opportunity to train with us in different moments.

“The other way was giving them on loan at the age of 17, 18 years. We did it with a few players, but that was because of the squad. For example, Ryan Kent was really close to first team, a little bit too good for the U23s, so you can give him a loan.

“But we keep a lot of these players here and let them play together. That was a real decision and now they’re doing really well.

“I’ve watched one game live in the stadium and a few games live on television, and it is good to see them improve. Even the players who don’t play too often when the squad is so strong, they can come in like against Everton yesterday.

“The whole squad has confidence at the moment and that’s really good, good for their development and good for us that we can make the decisions about their future at LFC.

“If at one point when we have to make a decision the player is not good enough for the LFC first team, then he needs to be good enough for other Premier League clubs or, minimum, Championship clubs.

“That’s what we have to create, we have to give them the opportunity and that’s what we are doing, that they can use their time [out of the spotlight]. Hopefully we can bring through a few of them in a red shirt at Anfield for the first team. That’s the dream of all of us.”

When asked whether the likes of Trent Alexander-Arnold, who has impressed at right-back for the U23s this term, and other Academy players will be involved in the first team’s EFL CUP fourth-round tie with Tottenham Hotspur at Anfield tomorrow night, Klopp replied: “We will see.

“I think there is a lot to say about a few of our young players, but it’s not for public because they are still young. They are really on a good way, that’s why they are involved in training sessions and everything what we are doing and we are really happy about the situation.

“But one reason why it is so easy for them to use the situation, training with these world-class players and improving every day, is because they don’t have to think about anything else. We try to keep this situation for as long as possible.

“I have not a 100 per cent idea in this moment what will be the line-up [against Spurs], because I have to talk to the players first. I’ll make the line-up after that or in the morning - it’s cool in my job that I only have to decide before the game! I have time.

“We will have a strong line-up. We have shown we respect all tournaments already. Whatever the line-up will be, it’s only about winning this game. I am full of trust and faith for the line-up for tomorrow, but I have no idea in this moment what it will be exactly.”

The manager was also quizzed on the benefits of having a thriving Academy structure in an era when transfer fees continue to rise.

“I am not interested in the money. Of course it’s cool if you use 10 players from the Academy and we make no signing in the transfer window - I would love to be part of the press conference when I say this!” Klopp quipped.

“In the end, it’s our responsibility that they come through a lot more than in the last few years…but meanwhile it’s really difficult because nobody is patient anymore and in England you don’t have real tournaments for the U23s.

“U18 is maybe a little bit of a tournament [but] the younger ones, no tournament, no challenge, no real competition. So you cannot really judge them and then they get to 18 and it’s the final judgement.