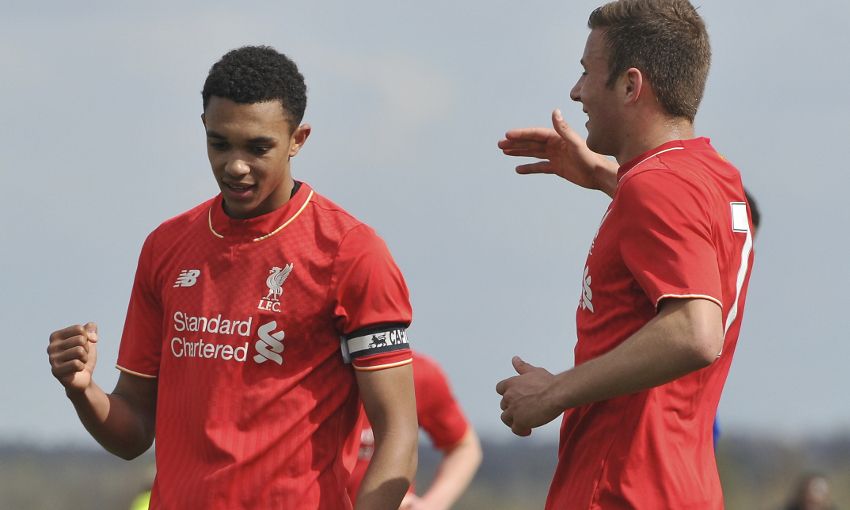 Liverpool U18s took down arch-rivals Everton 4-0 in the play-off stage of the Barclays U18 Premier League at Finch Farm on Saturday afternoon.

Goals from Adam Phillips, Herbie Kane, Ben Woodburn and Trent Alexander-Arnold secured back-to-back wins for Neil Critchley's side and maintained an unbeaten record against their Merseyside counterparts this season.

The young Reds opened the scoring in the 33rd minute through Phillips, before Kane netted the second from a set-piece just after half-time.

Woodburn and captain Alexander-Arnold then added their names to the scoresheet late on to clinch the three points.

It was a tense start to the affair but the first chance emerged for the hosts 10 minutes in.

However, Corey Whelan was on hand to make a crucial block on the No.9's effort and keep the game goalless.

The scare proved to be a wake-up call for the Reds. Good play between Phillips and Woodburn almost led to a breakthrough but defender Ryan Harrington cleared a dangerous pass across the face of goal.

Another promising opportunity in an entertaining first half fell to Toni Gomes.

Kane released Woodburn on the left hand side and the Welsh forward squared for Gomes, with everyone expecting the net to ripple.

But another excellent intervention from Harrington diverted the ball over the crossbar to deny the striker.

The deadlock was broken shortly after the half-hour mark, though, and in wonderful fashion.

Right-back Alexander-Arnold played an accurate long pass through to Gomes and the Portugal youth international then evaded a number of Blues defenders and slipped a neat through ball into Phillips' path.

The Liverpool No.10 calmly applied a finish to round off a well-worked move and give his side a deserved lead.

The visitors continued their charge just moments after the restart and it was 2-0 in the 47th minute when Kane clinically found the back of the net by converting a free-kick right on the edge of the area.

Kelleher then denied Everton a lifeline with a brilliant save to prevent Nathan Broadhead's curling effort from finding the top corner.

And Liverpool extended their advantage in the 70th minute as Woodburn's relentless work-rate was rewarded.

Having chased down an upfield punt and beaten the Everton goalkeeper to the ball, the 16-year-old kept his cool under pressure to make it 3-0.

Critchley's side were totally dominant in every department and their fourth goal came from the penalty spot.

After Phillips was fouled by Josef Yarney in the 18-yard box, skipper Alexander-Arnold took the responsibility and slotted home in the 83rd minute.