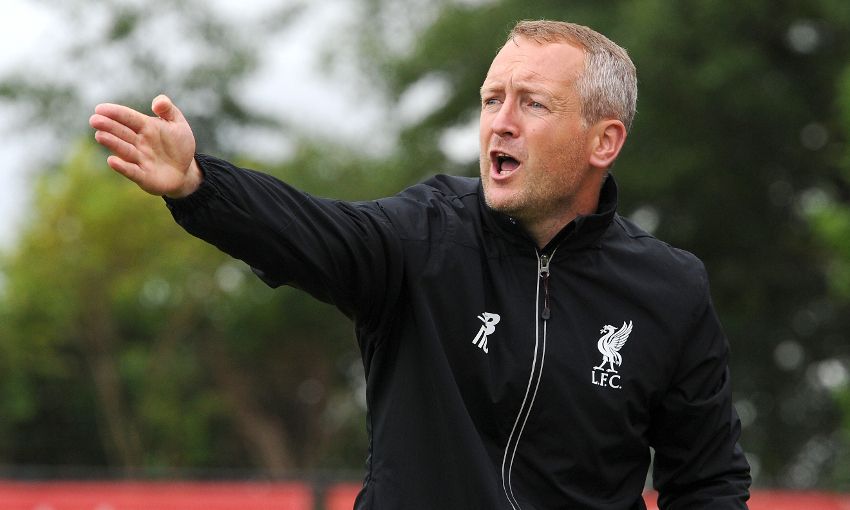 Liverpool leapfrogged Manchester United in the Barclays U18 Premier League as they handed their rivals a 4-0 thrashing on Saturday morning.

A brace from captain Trent Alexander-Arnold, which sandwiched goals from Paulo Alves and Corey Whelan, helped the Reds to a convincing win over Paul McGuinness' side, who saw goalkeeper Ollie Byrne sent off in the second period.

A cagey start to proceedings at Carrington failed to hint at the goalfest that would follow, with both sides struggling to create chances in the opening 20 minutes of the contest.

Adam Phillips' cheeky attempt from the halfway line, which flew harmlessly over the bar, was the closest the visitors came to breaking the deadlock in those early stages.

United carved out the first real chance with a quarter of the game gone, and were perhaps unfortunate not to take the lead when Zak Dearnley cut in from the left and saw his low effort clip the post and roll agonisingly across the goalline.

Unfortunately for the hosts, that piece of poor luck was fully capitalised on by Liverpool, as Alexander-Arnold exchanged passes with Ben Woodburn and thrashed a headed return ball home emphatically to make it 1-0.

The game settled into a more sedate rhythm following that strike, with both sides aware of the importance of the next goal, and it required a piece of Alves magic in the second period to turn things further in Liverpool's favour.

The Portuguese turned cleverly away from his man on the edge of the area before unleashing a vicious low strike into the bottom corner to put the Reds two ahead.

United responded well to conceding the second and came close to setting up an interesting finish when Marcus Rashford clattered the post with a fine effort from the edge of the box.

However, Neil Critchley's side were effectively home and hosed when United keeper Byrne saw a second yellow for a rash challenge on substitute Yan Dhanda straight after - and there was still time to add gloss to the scoreline.

The Reds did just that when Whelan headed home powerfully from a free-kick moments before Alexander-Arnold sidefooted home a second from a teasing Woodburn cross, as they clinched a confidence-boosting victory over their rivals.