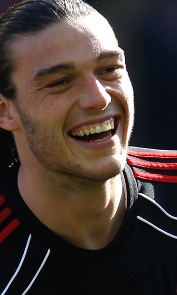 Kenny Dalglish believes Andy Carroll should treat the prospect of a mixed reception from Newcastle supporters as a huge compliment.

The Reds forward could go head-to-head with his former club for the first time since his January move on Sunday afternoon - if he recovers from the knee injury that kept him out of last week's 5-0 rout of Birmingham City.

Dalglish admits the 22-year-old is aware that the travelling support may not greet him with open arms but is confident the England frontman will be able to handle the situation.

"I think the boy is expecting something," said Dalglish.

"The fans will do whatever they want. It will not take away from what he has done for their club and it won't take away what the club meant to Andy.

"It is a compliment, really, in a strange way, if you do get the abuse because it means you must have been important to them.

"I don't know what they will do on Sunday but if, as a player, you don't get abuse off your old supporters then they can't have been too disappointed that you left."

Despite seeing his Liverpool debut delayed by a thigh injury, Carroll has made a promising start to life at Anfield.

His brace in the recent 3-0 success over Manchester City gave supporters a glimpse of the quality he can offer in the years ahead - and Dalglish has been delighted by his impact, both on and off the pitch.

"There has been nothing that Andy has done [on the pitch] that has surprised us, but what you don't know to the same extent is the personality," said Dalglish.

"If there is one thing that has pleasantly surprised us it is the boy's personality.

"He is a real down-to-earth boy who sometimes doesn't realise he is a footballer but that is because he is naive and has his feet firmly fixed on the ground.

"We have been delighted with the way he has gone about his rehabilitation and his performances.

"If next season is to be his best, then we have got a lot to look forward to! But I wouldn't be writing off this season just yet.

"We have been delighted with the way he has gone about his rehabilitation, and the way he has played the games. But unfortunately after scoring the two goals, he picked up an injury against Arsenal.

"We will need to see if he can play Sunday, but if he is not fit Sunday he should be fit to play the next game (against Fulham on May 2). So he has a bit of mileage to do this season before we start thinking about next year."

Dalglish's acquisition of Carroll isn't the first time he has swooped for an up-and-coming Geordie striker.

The Scot signed a young Alan Shearer during his time at Blackburn Rovers but feels that, aside from the obvious, the duo arrived under very different circumstances.

"It is a natural comparison, I guess," said Dalglish, "They are two Geordies, two number 9s and both signed by myself. But for me they are totally different. Different characters and different footballers.

"(Shearer signing for Blackburn) was under totally different circumstances. Alan came into a club that was trying to develop itself - Blackburn had only just won promotion - whereas this club is already hugely well established. So in that sense I don't think you can compare the two signings.

"Yes, they are both from Newcastle, but Andy coming to Liverpool doesn't really bear comparison with Shearer signing for Blackburn.

"The only comparison I see is the desire to be successful, but that is not just exclusive to Andy and Alan. I hope every player the club brings in will have that."

A special birthday quiz: How well do you know King Kenny?

Kenny Dalglish: I was terrified of 'This Is Anfield' sign

Watch his best against Bruges on King Kenny's birthday