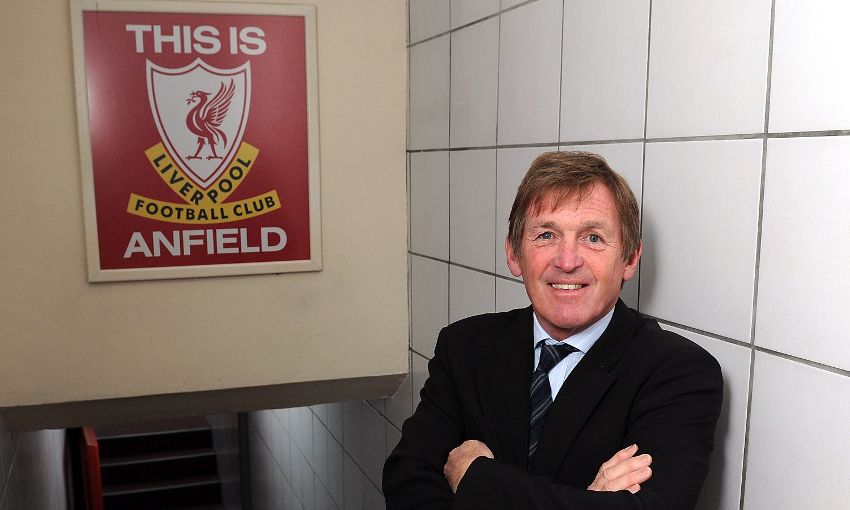 As Kenny Dalglish walked down the steps of the Anfield tunnel to make his home debut for Liverpool he was gripped by a sudden sense of terror.

An iconic sign attached to the wall directly in front of the two sets of players was strategically positioned to disconcert visiting teams hoping to derail the Reds.

On that night in August 1977, though, the world-famous ‘This Is Anfield’ frame briefly troubled a man who in years to come would give the gift of his football genius to the stadium time and again.

“We were playing Newcastle in the first game I played,” recalls Dalglish. “We drew 1-1 at Middlesbrough in the opening league game and on the Tuesday night Newcastle came.

“There was a boy called Tommy Craig, who was the first £100,000 teenager, who I had grown up with. He actually never grew up much – he was only about 3ft2!

“We played for Glasgow schools together and then for Scotland schools when we were 15.

“He was in the Newcastle dressing room. We came out to come down the steps and we got to the ‘This is Anfield’ sign. I said ‘That’s supposed to frighten you’. He said ‘Yeah’. I said ‘I’m terrified!’

“That was it, we went out and Ray Kennedy knocked one through in the second half, I went on and scored. It was special from that day onwards.”

Dalglish is among the contributors to a new and exclusive LFCTV documentary, This Is Anfield, which tells the story of a ground that has evolved into something much more than simply a venue for football.

So often the scene – and source – of glorious nights of success, the stadium is at turns a place of pilgrimage, a platform for greatness, a treasure trove of history and the home of a community.

On its lush green turf, Dalglish created his own indelible legacy as both a player and a manager.

And the Scot is delighted that the expansion of the Main Stand means new chapters can be written in the unique tale of Anfield by those who follow in his footsteps.

He says: “It has been a special place – the atmosphere, the camaraderie, the friendship, the loyalty and respect the people have for each other in and around the place.

“It’s a special football club and a special stadium.

“It’s fantastic we’re staying at Anfield, fantastic we’ve got the extension to the stand, but even more fantastic that the people are going to remain the same with the same outlook and philosophy.”

This Is Anfield, which premieres on LFCTV at 8pm BST on Sunday September 18 and will be available on LFCTV GO the same evening, uses unseen footage and rare images to provide an entire timeline of Anfield.

The documentary celebrates those who made the stadium what it is, from the founding fathers of the club to the managers entrusted with the keys, the men on the pitch who became heroes and – most importantly – the fans.

We learn about the key decisions taken within the ground’s walls, latterly inside the legendary Boot Room – a hub of collective wisdom and knowledge used to catapult Liverpool to glory.

“You don’t see much of it when you’re a player because obviously players never went in there,” remembers Dalglish.

“You went in there in the morning before training if you had to ask Ronnie [Moran], Roy [Evans] or Joe [Fagan] a question.

“When you came out afterwards, you were gone away and they would be sitting in there having a wee refreshment. We never really got involved in how it worked.

“After I became manager, I never went in after a game at Anfield. I told them, ‘I’m not clever enough’. Because I’d seen them in the away game that we had and they just go in there and all they did was pump the opposition for information – looked as if they felt sorry for them and got a lot of information.

“I thought ‘I’m not clever enough to be like this’.

“It was a real institution within the football club and I bet there have been plenty of decisions made sitting in that Boot Room having a discussion.

“Old Bob [Paisley] would be in there, Ronnie Moran, Roy Evans would be the younger member, Tom Saunders, Joe Fagan – every one of them was really shrewd, educated and considerate about football.

“I thought ‘This is a bit above my station, I’ll just wait’. I went in with them for a drink with the opposition manager and coaches in the away games, and I saw them work then. I thought ‘I’ll leave the Boot Room to them’.

“But it was a fantastic place to be and a real think-tank. I bet it solved a lot of problems and was a focal point of a lot of success for Liverpool Football Club as well.”

Want to watch This Is Anfield? Click here for details on signing up ahead of the documentary's first showing.