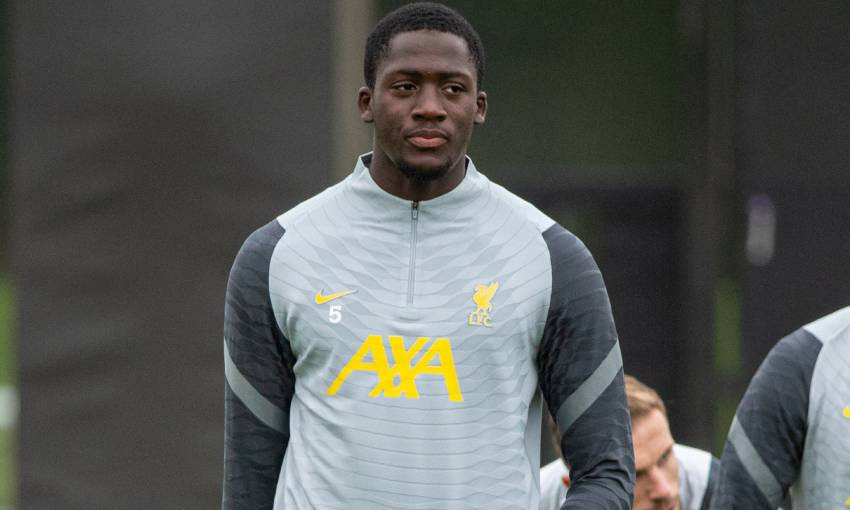 Ibrahima Konate has thanked his Liverpool teammates for making the club feel ‘home’ to him so quickly.

The 22-year-old centre-half, who arrived in the summer from RB Leipzig, helped record successive clean sheets in fixtures with Crystal Palace and Norwich City in his first two competitive appearances for the Reds.

Konate and the rest of Jürgen Klopp’s side are now targeting a third consecutive shutout when they visit Brentford in the Premier League on Saturday.

Ahead of the meeting with Thomas Frank’s newly promoted team, Liverpoolfc.com caught up with the No.5 at the AXA Training Centre to preview that contest and find out about his first few months on Merseyside. Read on for the interview in full…

You’ve played two competitive games now in your Liverpool career. How settled are you feeling in the club?

I played two games and the team played very well. The fans helped us – that was very, very great for me and for my family. I am very happy to be here.

Great team performances, as you say, in those games. How do you think you did on a personal level?

I think I played well but the more important [thing] is how the team was – if we won, if we had a clean sheet or not. That is more important for me and not my personal game.

There were plenty of pictures of you being involved in the goal celebrations against Crystal Palace. It looks like you really enjoyed playing at a full Anfield...

[Laughs] Yes, of course I am happy when one player scores! It’s like if I score, you know. But it’s not my fault if I celebrate with the player because I am not so far [away from] the player. I am immediately here, it’s for this [reason] I celebrate with him! It was amazing and I’m very happy.

When you join a new club there’s always a settling-in period. How supportive and helpful have your teammates been in making you feel at home in Liverpool?

Every player helped me in this team when I came the first day, to be like at my home. This was very important for a new player and for me. Now, I think every player can see this on the pitch: I am very happy to be with every player. This is good and I hope this will continue in the future.

Have you grown close to any teammates in particular in the squad?

Maybe Sadio, Naby and Div Origi, because they speak French and it’s easier to speak with them. They helped me very well when I arrived at the club.

Away from the pitch, getting used to your new home in the city is important as well. Have you had much time to go out exploring and what have you made of Liverpool?

Of course, I cannot stay at home. I am in a new city and I need to know how the city is where I am. I love the city. I was in the city centre. And where I live, not so far in the car I have the sea – very beautiful. And yes, it’s nice – very nice.

In terms of on the pitch, how much are you learning from the other centre-halves at the club? So far you’ve played alongside Virgil and Joe…

I learn about Virg, Joe, Nat, Joel since the first day when I arrived at the club because I play with very good defenders and I train with them. But I think I can learn about all the players of this team. I need to improve every day and this is good. I am with big players in this team and I can just learn every day.

Three points will be the aim on Saturday, what do you and the team need to do against Brentford?

We have to understand and to do what the coach wants. I think and I hope we will take three points there. We know it’s not easy. But if we play together – we defend and we attack together – I think we have a chance to win the game.

You’ll be looking for your third clean sheet in a row in all competitions. How much pride do you and the rest of the backline take in keeping a clean sheet?