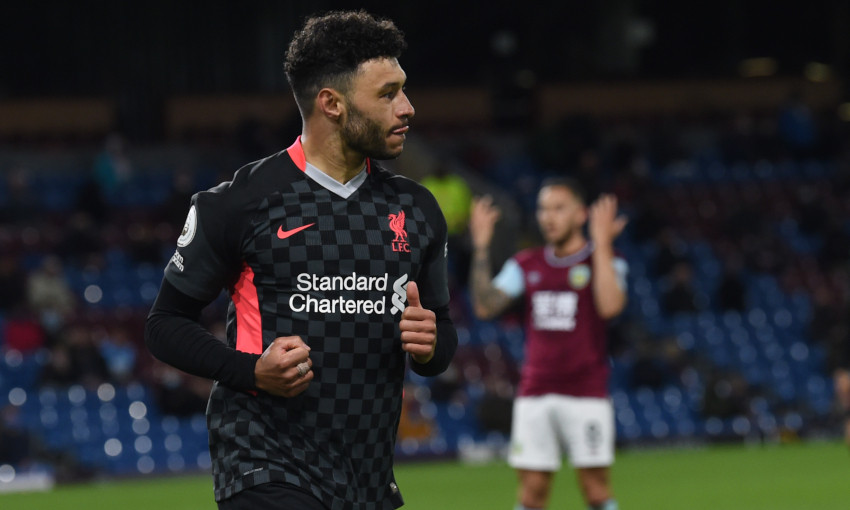 Alex Oxlade-Chamberlain was delighted to turn his hard work into an important contribution for the team as he sealed Wednesday's win at Burnley.

The midfielder returned to the Liverpool squad after illness and netted his first Premier League goal of the campaign on 88 minutes to confirm a 3-0 result at Turf Moor.

Collecting Andy Robertson’s pass inside from the left, Oxlade-Chamberlain showed excellent footwork to create space before rifling a powerful strike inside the near post.

“I’m absolutely delighted to be a part of this team and play for this football club, and that’s what I absolutely want to do,” he told Liverpoolfc.com post-match.

“So that’s all I’ve been focusing on really, trying to make sure I work as hard as I can for the boys and keep training well, keep giving the manager decisions to make, as the other lads have maybe in a similar position to me at the minute.

“That’s all we can do, keep our heads down and whenever we get the opportunity, like tonight, I went on there and did something positive. I would have liked to have done that a few more times coming on this season.

“But you have these sort of spells in football sometimes and the main thing is I’ve gone through difficult moments in my career, so just being fit and healthy for a start, that’s always a good thing and gives you a base to work off.

“I’ve felt good for a while and I’m trying to work as hard as I can, keep my head down and keep believing in what we are all trying to do here: which is obviously now qualify for that top four.

“Anytime I get the opportunity to help I’ve got to make sure I’m ready to do that, and tonight I was glad I could do that. I’ll be kicking myself to do it more often, for sure.”

Roberto Firmino gave Liverpool the breakthrough against Burnley two minutes before half-time as he slotted in Robertson’s cross.

Nathaniel Phillips then netted his first Reds goal with a header, before the centre-back cleared a Ben Mee effort off the line with the hosts mounting pressure in front of a crowd of 3,500.

But three priceless points were clinched for certain when Oxlade-Chamberlain came off the bench and found the bottom corner.

The substitute felt the victory – which lifted Jürgen Klopp’s side up to fourth with one game left to play – was a result of contributions from all areas of the pitch.

“I don’t think it was a comfortable game because I think Burnley did what Burnley always do really well,” said Oxlade-Chamberlain.

“They make sure they make it hard for you and then they are a nuisance up front as well with willing runners and a physical presence. Their boys in midfield as well did really well; they cover a lot of ground, they are good footballers. They did what they needed to do and we knew what we needed to do tonight – and that was to make sure we defend to the highest quality, never switch off in that regard.

“We knew we had to be patient as well at times, and play football and make sure we played good football, quite intricate, finding spaces and trying to break them down with patience. I think in the end the boys did that

“But I’d say for sure, for spells it wasn’t all us and we had to make sure that we defended well. The two boys at the back, Nat and Rhys, were brilliant again and that was a massive base for us to build off.

“And Ali as well, he had to come for a lot of crosses tonight and his presence at the back – in our box this week! – helped us massively. They gave us a base to work off.

“Then, I think the whole midfield played really well all night. The front three are always a nuisance; I thought Bobby did really well as well in linking the play up. So, overall, we are delighted and it’s as good as we could have hoped for tonight.”