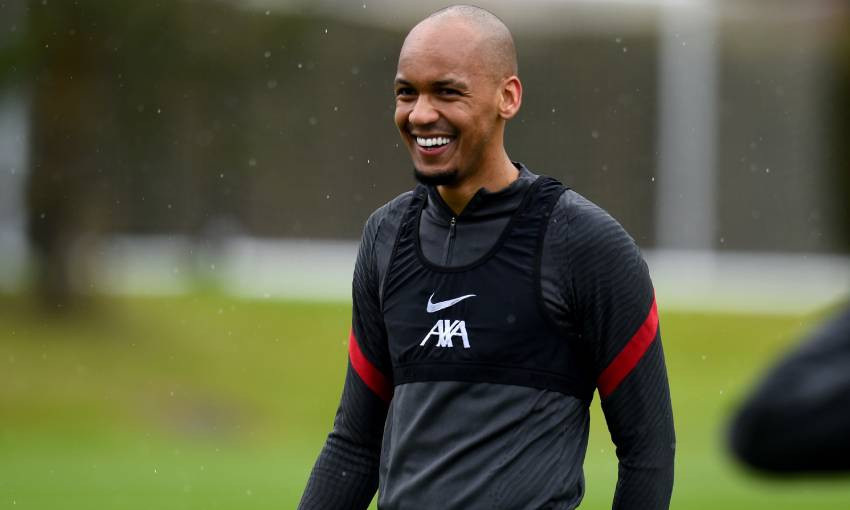 Fabinho hopes Liverpool's experience of coming through high-pressure moments in the past can help them with their push for Champions League qualification.

With three fixtures remaining in the 2020-21 campaign, the Reds crave the maximum nine points in their quest for a top-four finish in the Premier League.

A 4-2 victory over Manchester United in midweek strengthened the squad's chances of achieving that aim, though the immediate objective is to follow up that result with a win at West Bromwich Albion on Sunday.

Liverpoolfc.com caught up with Fabinho at the AXA Training Centre to preview the clash at The Hawthorns – watch a snippet of the chat below, and read on for the full interview...

How satisfying was that win at Old Trafford, given the performance and the way you came from behind?

The win was really important for us. We knew we had to win this game to keep our chances to be in the top four and the way we won the game was really special. It's never easy to play against Man United and at Old Trafford. We really played good football, we defended together and it was a really good performance.

How pleased were you to see Roberto Firmino score two decisive goals against United?

Oh man, I'm really happy for Bobby because he's someone who always plays good football. When he can't score, he can create space for other players or the opportunities for other players. [Against United] he was in the right place in the right moment. When the ball came to him, as a proper No.9, he scored two nice goals. He's a really important player for us and the important players show themselves in important moments. I'm really happy for Bobby.

Liverpool have won their last five Premier League games when you've been in midfield. How much are you enjoying being back in there?

I always enjoy to play with this shirt, to play with my teammates and I always try to do my best as a midfielder or as a centre-back. We had five wins in the last five times I played [as a] midfielder, that doesn't mean we win the game because I'm there! But if I can help the team to get the win, to play better, I'm really happy.

When you are in the midfield, how determined are you to protect the defence? The centre-back pairing at United will have appreciated your support...

I always try to be in the best position to recover the ball, to protect the defence – it doesn't matter who are the centre-backs. Rhys and Nat played a really good game. I always say the communication between us is really important, and the communication with Rhys and Nat worked really well – especially with Nat because he starts to show his leadership as well and we need someone at the back who can talk to the other players to be in the right position or to protect in my case. The communication between us works really good, so we are really happy with the game we played.

Thiago Alcantara believes you playing in midfield brings the best out of everyone. He's in a fine spell of form himself, so what's it like to play with him?

Thiago is someone special. He's a really good player and I can have good communication with him between games because we both speak Portuguese, so I really understand Thiago. He's a really good player with a lot of quality and now he's getting confidence and it's really important for him because he can play all the games, he can be important for us. With Gini, I think we did really good work in the last couple of games. We try to be at this level or better for the next games as well.

On the top-four race, do you enjoy this pressure at the end of a season where the margin for error is so small?

This team is used to playing games like this in moments like this, the decisive moments. As you say, the margin for error is really small but we have players with experience who have played so many important games and won these games as well. We really face these three finals in the best way possible, try to play our best football and try to fight because these games we can't just win with our quality, we have to really be there in the challenge. It's a decisive moment but as players we like these moments, we like to play these type of games. We have to be ready.

You mentioned treating the last few games as 'finals' – how do you go about doing that?

We will prepare in the best way possible, we will try to play our best football. But in finals, sometimes you don't play your best football, you just get the three points. In this moment, I will take it because that's what we need.

West Brom are already relegated from the Premier League, but what are you expecting from them on Sunday?

They are already relegated but that doesn't mean we have an easy game. They have had some good results in the couple of games – just the last game they lost against Arsenal but before this they had some good results. They had some players in a really good moment, like the Brazilian Matheus Pereira. We have to be really focused, concentrate on the game and try to bring the three points to Liverpool.