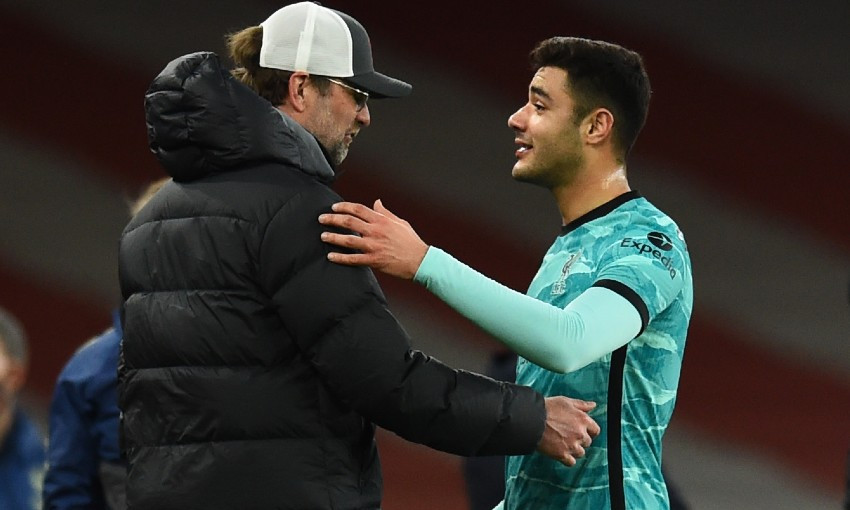 The Reds were in control from first whistle to last at Emirates Stadium on Saturday night and strengthened their candidacy for a top-four finish in the Premier League thanks to Diogo Jota’s second-half brace, which sandwiched Mohamed Salah’s 26th goal of the season.

Kabak told Liverpoolfc.com: “It was so important for us, this feeling. As you know, we have lost points so we had an extra motivation. We played very well and we dominated the game.

“I think in the first half we gave it everything in the tackles, in the challenges, in the midfield, and second half we found the goals. Three-nil is a really, really good score and we are so happy we kept the clean sheet also.”

Victory over the Gunners lifted Jürgen Klopp’s side to within two points of Chelsea, who began the weekend in fourth place and lost to West Bromwich Albion earlier on Saturday.

Centre-back Kabak continued: “It’s so important. Arsenal is a big team also and when you win at a team like Arsenal you build bigger confidence for the whole of the team. It’s two points difference from the top four so I hope we can win all of our games and finish in the Champions League spot.”

Another victory, another clean sheet ✅ We will keep on fighting to make our fans happy and proud. 💪🏻 @LFC #YNWA #LFC https://t.co/Syu06zB1D0

The Turkey international again formed a strong partnership with Nathaniel Phillips at the back as Liverpool registered a third consecutive shutout.

“With Nat, we know each other every day better and better,” Kabak said.

“Now it’s three clean sheets in a row and I hope we will keep it up in the Madrid games too. It’s so important for us, the Champions League, and we are just so happy.”

And on that upcoming tie with Real, Kabak elaborated: “I can’t describe my feelings because everything [has happened] so quickly [since he joined Liverpool].

“I’m so happy that I’m playing for this huge club, it’s an honour for me. Every game, every second I’ve been here, I try to do my best and try to help the team. I am so happy that I am here.”