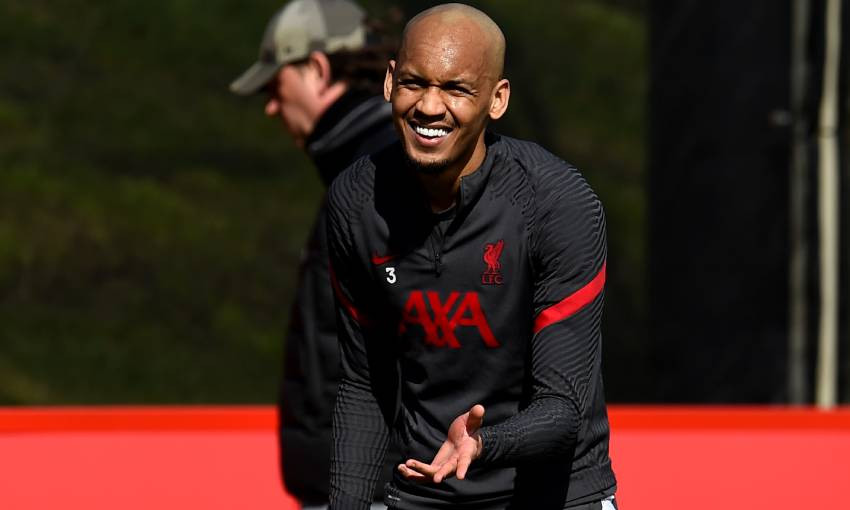 Fabinho believes the collective and individual challenges faced so far this season have ultimately made him a better player.

The No.3 is now enjoying life back in his usual defensive midfield role, having spent the majority of 2020-21 deputising in the heart of the defence due to numerous injuries within the squad.

He hopes such development can help strengthen Liverpool's cause as they look to finish their Premier League and Champions League campaigns in the strongest way possible.

Read on for our chat with Fabinho at the AXA Training Centre ahead of the team's trip to Arsenal...

First of all, how beneficial has this break been before the end of the Premier League campaign?

Now the last part of the season really starts. For me and the players that didn't go to the national team, this was a good time to work. We really enjoyed our time in the training ground in these almost two weeks. And for the players who played with their national teams, it was a good time as well because some of the players could have some minutes, some of them scored goals, had an important role in their teams. So that's good for us and we need to be ready for these last two months.

You spent time on training pitches in these last two weeks and that's been important. Has it also been important to rest your brains a little bit to try to get your minds relaxed for the work that's to come?

I think we didn't have a time like this where you didn't have to think [about] the next game. The last game, I didn't remember the date, but it was almost three weeks ago, so it was a good time to relax mentally as well. We had the rest, so now we have to be ready for the games that we have.

How challenging has it been this season? There's been so many obstacles to climb, especially for you because you've had to do so many different things...

It was a different season because we play almost all the season without fans – the fans are really important for us. For me especially, it was a little bit different because I played a long time as a centre-half, so I learned playing this position and I think I did a good job in this position as well. Now I'm back in the midfield and I will try to help the team and give my best as well.

Although it's been challenging, do you think it's made you a better player?

Yes, I learn and improve a lot in this position as well. I think this helped me to be a better player and now the manager knows he can count on me in another position as well. As well, I had to be more [of a] leader than normal because we lost Hendo, we lost Virgil. So, on the pitch we had to step up and be a leader as well. I tried to be a leader as well, of course – I have to improve a lot in this role as well. But I think I learned a lot in this season and I improved in a lot of aspects.

You spoke after the RB Leipzig game about having missed playing in midfield. Is it good to be back where you know best?

It's good to be back in the midfield. I really enjoy playing as a centre-back but midfield is my position. So if I can be important for the team in this position as well, I will give my best.

What are the challenges of playing Arsenal?

Arsenal is a really good team, it's never easy to play away against them. They like to keep the ball, they have very good players in midfield, in their attack and we know if they have space they can be really dangerous. So we have to play really our way, press, don't give them the space they want. And when we have the ball, just to have personality, be creative and try to be dangerous.

Obviously the focus is trying to get into those Champions League positions. Because of the way the season has gone, you've got some ground to make up. Do you think the team are capable of going on a run of wins?

Yes, of course. This should be our goal now, being in the top four. Of course, this will not be easy. We have to win almost every game that we have but I think we are capable of it. First of all, we have to believe that this is possible and then just play our best football. As I said, everyone is in a good mood, everyone is ready for this decisive part of the season and we have to just play our best football if you want to celebrate good things at the end of the season.

How easy is it to focus on Arsenal when you face Real Madrid, one of the biggest names in football, a few days later?

We have to focus on Arsenal because Arsenal is a really good team. As I said, the last game we played was three weeks ago and I didn't go with the international team, so I really want to play, I really miss playing. We don't have to think about Real Madrid because Arsenal will be a really hard game. Our ambitions and our objectives is not only the Champions League, it's in the Premier League as well. So we have to focus on Arsenal and play our best football on Saturday.