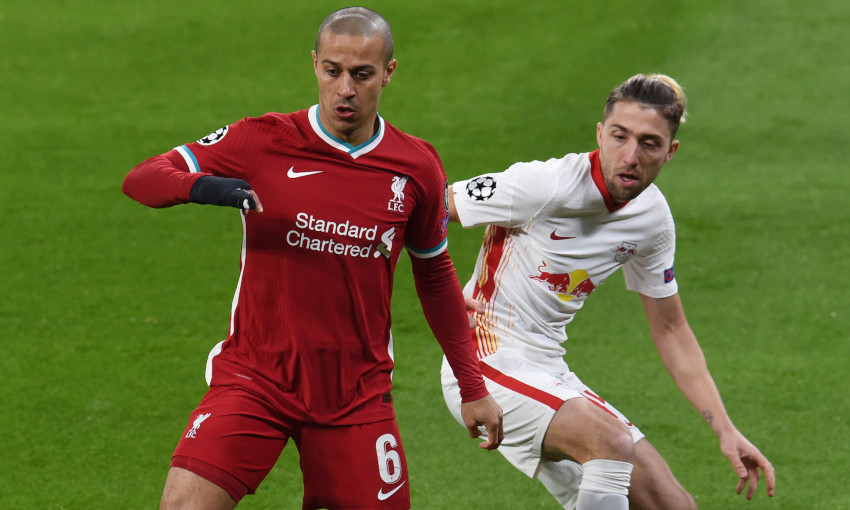 Thiago Alcantara wants Liverpool to build on the many positives that came out of Wednesday's Champions League win over RB Leipzig.

The Reds advanced to the quarter-final stage of Europe's premier club competition with a 4-0 aggregate victory in the last-16 tie thanks to goals from Mohamed Salah and Sadio Mane in Budapest.

It was a welcome return to winning ways for Jürgen Klopp's side and Thiago hopes they can now carry that momentum into Monday's Premier League fixture at Wolverhampton Wanderers.

Speaking to Liverpoolfc.com post-match in Hungary, the midfielder said: "It's like a positive injection to our morale.

"I think we deserve to celebrate and to be happy with something, and from now on have this feeling that we have right now. And with that, we can win all the games that we have left.

"It's been a tough period for all of us because in our worst nightmares we didn't expect that we are now in this position in the Premier League.

"But we are trying to perform as best as we can and try to get better in every training session. I think this performance is a positive thing for all of us.

"This feeling we have right now, we have to celebrate a little bit with each other in a moderate way and with this feeling prepare the [Wolves] game and move on."

Klopp decided to deploy Fabinho in his trademark deep-lying midfield role for the encounter against the Bundesliga side, with Nathaniel Phillips and Ozan Kabak impressing in the heart of the defence.

That tactical adjustment by the boss allowed Thiago to operate further up the field at Puskas Arena.

Asked if he enjoyed playing in a more advanced position, the 29-year-old replied: "For sure, because you are always near the goal, you can create chances and you can score. So it's a nice position as well.

"You can split it up a bit and move some lines forward, and you can be more confident and play with the strikers.

"He [Fabinho] is a great player. He gives us a lot of confidence on our backs and it's awesome to play alongside him."