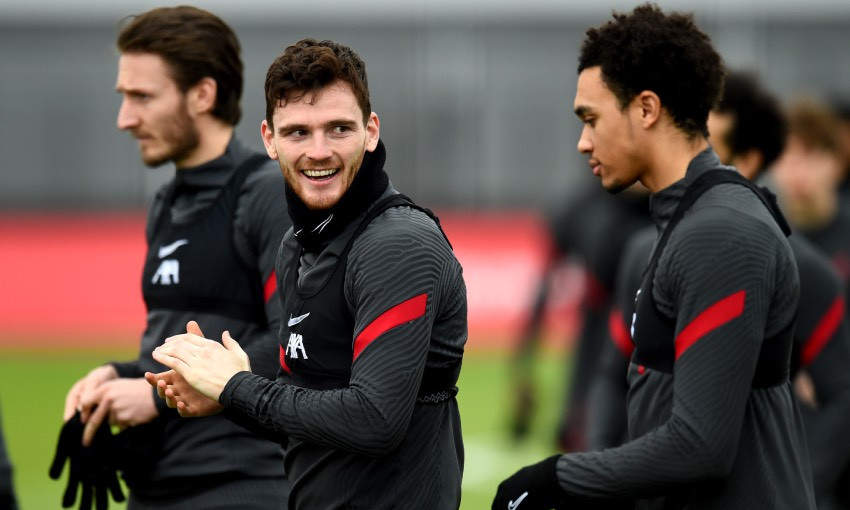 The Reds head into the game with confidence following an impressive 2-0 victory over RB Leipzig on Tuesday night in the first leg of their Champions League last-16 tie.

But three successive defeats in the Premier League, two of which came in L4, still linger for Robertson and his teammates as they look to put things right domestically and on home soil.

Read on as Liverpoolfc.com caught up with the left-back ahead of the 238th Merseyside derby... 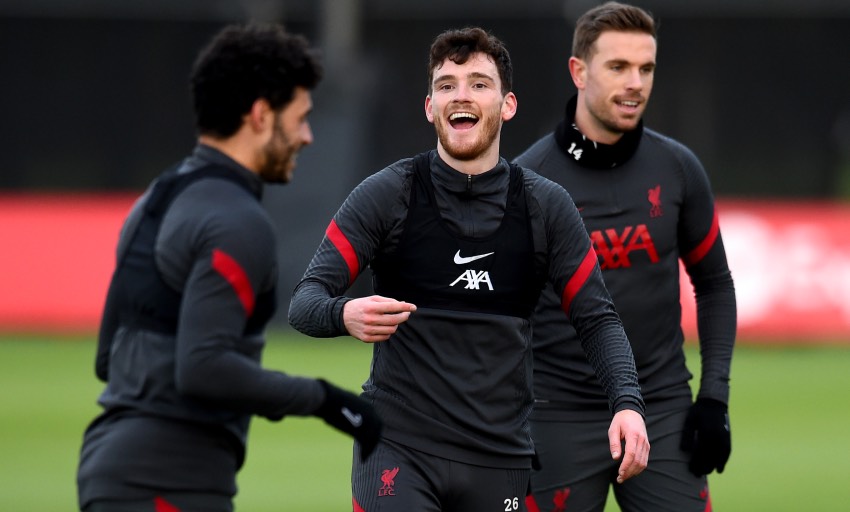 Andy, a quick turnaround but I bet you were all ready to play this game when coming back from Budapest?

Maybe not quite – we were a bit tired afterwards! But look, it's a derby, it's at home. Our Premier League form hasn't been as good as it should be playing for Liverpool and the next game in front of us is one to try to put it right. We know we need to try to be at our best. Everton, especially away from home this season, have been one of the best teams in the league probably at it and we know they'll come to Anfield fancying themselves to get a result. But if we're at our best then we need to fancy ourselves and we need to hope that we can get the three points because in the league it's definitely much needed.

Just on the Leipzig game, were you thinking about your lob that nearly went in during the first half when you finally got to bed?

Yeah, still thinking about it, to be honest! I told the gaffer after the game if that went in I'd have walked off, so he'd have had to probably make a sub. If you were to put a list of who was going to score a worldie like that in that game, I'd have probably just been behind Alisson. So it was good to maybe surprise a few that I came close but I'd have much preferred it went under the bar instead of over.

You've played in six Merseyside derbies and this one is a chance to get some momentum going after a positive result...

Yeah, that's what we've not been good at this season. We've maybe put one, two or three good results together and then maybe fallen away a wee bit. The perfect example: winning away to Tottenham and West Ham, then following it up with two other defeats. We focus on the next game but we just need to try to put a run together [where] we start winning games again because winning games breeds confidence. You saw that on Tuesday night – the lads got better and better as the game went on. Hopefully we can get three points on Saturday because it's much needed, we're quite far behind in the league and we need to get back to winning games. It's as simple as that. The next one in front of us is always the most important and we'll go into the game with that attitude.

You've suffered defeats at Anfield in each of the last three games. How strange a feeling has it been leaving Anfield after a defeat in the league as it hasn't happened that much?

Since I came here, I hadn't been beaten at Anfield in the league until two or three weeks ago. Then it got followed up with another two. We've always tried to make Anfield a fortress that people don't like coming to. Unfortunately, the last three teams that have come to Anfield have left too easily with a good result. That's something for us that isn't acceptable. We based ourselves on our home form and always making it hard for people to come and get a good result. The last teams that have come here, it's been too easy. If Everton do get a result on Saturday then we need to make it as hard as possible for them to get it and not make it easy like the other teams have in the last couple of weeks. But we'll be doing everything to get the three points and get back on track, especially at home. They're three points that'll be much needed and we'll hopefully close the gap to the teams that are above us.

You've had Jordan Henderson even closer to you on the pitch while he's been at centre-back. How have you found that? I'd imagine quite loud...

Yeah! Obviously the closer he is to you, the louder he gets. But that's the way Hendo leads. He leads by example, being vocal and he's really good at reading the game. He can probably see a bit more at centre-back in the game and that's why he's probably louder and he can see things and try to help us all through the game. Playing out of position, we all need to try to help him as well, which we've tried to do. He's done an incredible job. Of course, I'm sure he would much prefer being further up the pitch and that time will come. But when you do have a crisis in a position and there is a shortage of centre-backs, then there's no other man you'd want to look to than your captain – especially Hendo, the way he conducts himself. Like I said, I'm sure he'll be desperate to get back in midfield and whenever that may be. But for now he's doing a fantastic job at centre-back and long may that continue until hopefully we get all our centre-backs back and get a bit more familiarity back there.

At the other end of the pitch, you've got Mohamed Salah now on 24 goals for the season. How nice is it knowing you've got a player up front that can finish any chance given to them?

Mo's finishing and his goalscoring stats this year have been incredible. But like I've always said about the front three, it's also about their work-rate. I know he's hungry, he always wants to score more goals, he wants to be more influential in games, he wants to be involved all the time. That's the sign of a top player. The numbers are incredible. He's had a really good season, especially in front of goal. Long may that continue. He becomes more influential in everything he does and he keeps working as hard as he is for the team. I think in the 80th minute on Tuesday I saw him doing a defensive header at the back post, which is a bit of a surprise but he's clearly working hard. So is Sadio and so is Bobby. Yeah, the other two might not get the headlines because they've not scored as many goals but all three of them are working really hard and are so key to us. We really need them to keep doing that and long may that continue because when they do that, the more chances they get and the more chances they put away.