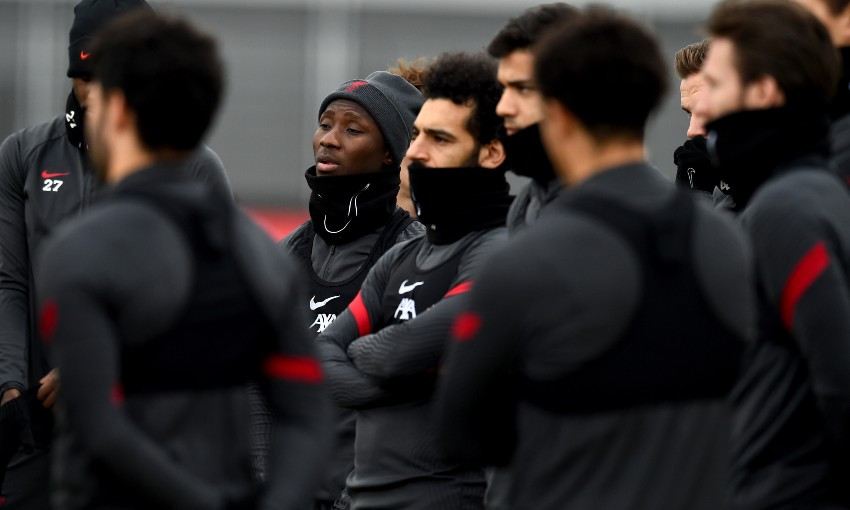 Naby Keita could make his return from injury in Saturday's Merseyside derby.

Liverpool’s No.8, who has not played since mid-December, is back in full training and may come into contention when Everton visit Anfield.

Fabinho, however, will not be ready to feature as he recovers from a muscle problem, while James Milner and Diogo Jota also remain sidelined along with the Reds’ long-term absentees.

Speaking during Friday’s pre-match press conference, Jürgen Klopp said: “Naby trained yesterday with the team, so we have to see what we make of it.

“Fab was not in training, all the others not as well. Nothing new. They all get closer - Fab gets closer, Millie gets closer and Diogo gets closer, but not close enough for the weekend.”

Inside Training: Rondos, quick feet and small games ahead of Everton

Klopp went on to provide further details on Keita’s condition, stating: “Naby could have been in the squad against Leipzig, but it didn’t make sense because he’d only trained two days with the team.

“So, we said stay at home, train two days of proper training sessions, but unfortunately Naby got ill a little bit and couldn’t train these two days.

“Yesterday we reintegrated him again. I just don’t know, but we don’t hold him back or whatever. Of course, after the injuries he had, we don’t want to force him in or something like that, but it would be nice to have him. Is he able to play a few minutes on Saturday? I don’t know.

“If he’s not, if we speak about it and it’s better to rather not play a few minutes then it is better to stay away from the team and just train proper, proper.

The manager also confirmed there are no fitness concerns regarding Alisson Becker.

Everton, meanwhile, are boosted by the returns of Dominic Calvert-Lewin and Allan.

But Yerry Mina (calf) will miss the Anfield encounter after being forced off in the midweek defeat by Manchester City. Jean-Philippe Gbamin (Achilles) is also ruled out.

“For the fact we have a lot of games in this period, it is important to have all the squad available. We are close to having all the players fit. This is important. We can rotate a little bit and keep the squad more fresh.

“Allan was out for two months. To have him back is really important for us. All the players available can start the game.”