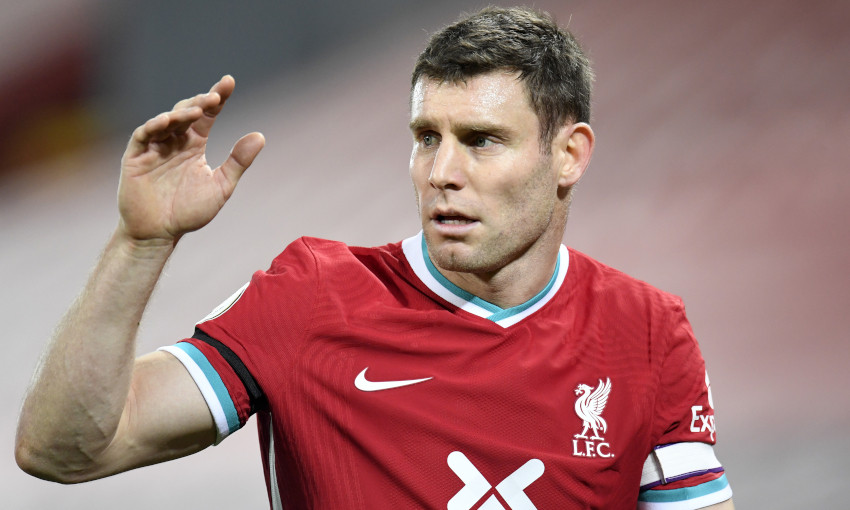 The 1-0 defeat at home to Burnley on Thursday night extended the Reds’ winless streak in the Premier League to five games, with no goals scored in the last four.

Looking towards the trip to Old Trafford as a chance to put things right, Milner stressed the squad’s responsibility to do everything necessary to turn the tide.

“It’s a great opportunity for us,” the vice-captain told Liverpoolfc.com of the fourth-round meeting with United this weekend.

“Football is like that – there’s peaks and troughs. Nothing is ever easy and smooth. It seems easy sometimes when things are going well and you’re flying.

“When you’re in tougher times the ball seems to not quite go in the goal or drop to players in the six-yard box. A lot of the time that’s just how you think of it mentally. ‘Here we go again’ if things aren’t going well. But you look at the positive side if things are going well.

“The thing about football is you get no favours, no-one is going to make it easier for you. It’s down to us to pull ourselves out of this run we’re in and it comes down on our responsibility and our shoulders.

“When it’s not, that’s where you need to stand up and be counted and be responsible and keep pushing and change it. It’s down to us to do that.”

During the chat at the AXA Training Centre, Milner also discussed the nuances of playing United for the second time in a week and the desire to clinch the club’s first FA Cup since 2006.

Read the rest of the No.7’s pre-match thoughts below…

A second game against Manchester United within a week. What can you take from that game and is it an advantage to play them again so soon because how they play is fresh in your minds?

Yeah, I think obviously that helps on the analysis side; before you go into a game you always do your homework on a team. But obviously when you’ve played another team so soon before, like you say it’s fresh in your mind. There are things in that game that went well that you want to try to keep doing, and there’s things that you want to change and things they would have done to combat us. We’ll prepare and work on that in the next few days going into the game.

It’s one of the games fans always look out for in the fixtures, as a Leeds boy you do that yourself too. Are you relishing getting an extra crack at them this season?

It’s always a special game. Liverpool v United is the first one everyone will look for, I’m sure, every season. The rivalry is there for a reason – both teams have been very successful. Myself as a Leeds fan, growing up to dislike the red side of Manchester as well. It means a lot. There’s respect there, it’s respectful dislike, if you can say that. You’re always desperate to beat them. They’re obviously having a good season and it’s down to us to pull one out and get one over on them.

This Liverpool side thrives on the atmosphere – do you think the lack of fans has hit you harder maybe than some others this season?

I wouldn’t say harder, it’s the same for all teams – I don’t want to use that excuse. It is a big miss in the game. It’s definitely not an excuse, it’s the same for all teams. Looking and analysing it from our point of view, how we play – we’re on top of teams at times and you feel that pressure in the stadium growing on the other team when there’s fans there. When you’re on the attack, when we’re pressing and winning the ball back, you get that lift from the crowd when you win that ball back, it’s a little win in the game and all these things build up. That’s obviously from our side, but it’s the same for all teams and we haven’t dealt with it as well as we should have done. We need to do it better.

The fans have been incredible since I’ve been at the club and long before I’ve been at the club. You’re well aware of the support they give us. It would help us if they were right by our side on that football pitch at this moment in time, but we have to stick together in the training ground. We know the fans are right behind us, as always, and we need them more than ever and sharing their voices where they can. It’s disappointing they’re not with us but it’s down to us to give them something to shout about and pull ourselves out of this run we’re in at the moment.

It’s 15 years since Liverpool last won the FA Cup – how much would you like to have that back in the trophy cabinet?

It’s always special when you win any trophy and the FA Cup is a special competition. The success we’ve had over recent years, we’ve managed to change that wall at the training ground and at Anfield with the number of trophies we’ve won. That’s always special and a big motivation. For a club as successful as Liverpool you want to keep adding to that. It would be nice to do that but obviously there’s a long way to go. We just want to step out there and win every game we can. The next one is the most important and maybe more so than ever, obviously with the little run we’re on at this moment in time.