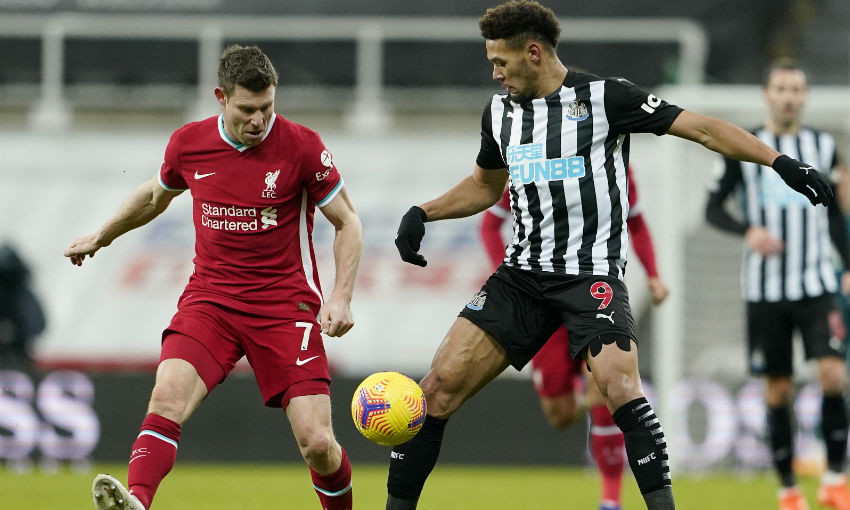 James Milner rued the opportunities Liverpool missed as they were held to a goalless draw away at Newcastle United on Wednesday night.

The Reds took a point from their final fixture of 2020 after squandering chances in front of goal and being denied multiple times by stopper Karl Darlow at St. James' Park.

Regardless, the reigning champions will end the year top of the Premier League and three points clear of second-placed Manchester United.

Read on for Liverpoolfc.com's post-match interview with Milner...

Couldn’t quite get it over the line tonight, but finishing the year top of the league and a lot of games to come, a… https://t.co/9UkPaZaLN4

Is that a rare night where you just weren't clinical enough?

I think that's pretty spot on really. I think the performance was pretty good, bouncing back from the second half in the last game, which wasn't particularly good, and then putting in a pretty good performance tonight. We created enough chances, [were] solid at the back, any balls that popped out we were winning. But a mixture of good goalkeeping, defending, a bit of bad luck and maybe not taking our chances well enough was the difference.

If you were looking for areas of improvement from Sunday night – the fact you did create more opportunities here...

For sure, I think it was a big improvement. We've come up against two very stubborn teams, given everything to get the points. So at least we performed better, unfortunately it wasn't good enough for the three points but we've got to keep pushing and if we play like that [then] more often than not we'll get the three points.

From a midfielder's perspective, can you give us a sense how difficult it is to pick your way through when you're up against a five and a four and then just Callum Wilson on his own?

It's important that you just keep it moving, keep patient and make sure you have movement up front. It's easy to sometimes get frustrated and try difficult balls or too straight balls over the top and they get cut out. But then the important thing as well is that you've always got to be ready to react when you've got someone like him up front who's quick and is a good, quick player. Teams want to break out on you and you have to make sure you're disciplined and playing with good shape to break them down but you're not committing too many men forward and your protection is good when it breaks down. It's about getting that balance and I thought we did that tonight but we just couldn't get the ball over the line.

It was also key that you don't lose the game either, and Alisson comes up with a massive save towards the end…

We restricted them most of the game but Ali is top-class – everybody knows that. Especially on a night like tonight, it's going to be pretty cold for him I can imagine, standing at the back with not too much to do and then having to pull a save out like that towards the end. So that shows how good he is and what a big player he is for us.

Given how many problems you've faced as a group from the start of the season, is it still a positive that you can go into 2021 top of the table?

I think it's a positive but it seems to be at this moment in time that nobody wants to take it by the scruff of the neck. We've dropped points, everyone seems to be dropping points. United have had a good run and they're probably the only team who are putting a run together. It's important that we need to kick on now and try to get a few three-pointers. But the world is in a very strange place at the moment and it's the same in football. Everybody's lives are upside down, it's tough mentally for everybody and it's the same in football. Hopefully we can get out of this the other side and it's the same with football – we just need to keep plugging away. It is different, it's different times and that time where you maybe need the crowd to give you that lift and get it over the line. That might've happened on another day. But it's where we are and we need to keep working hard.

As you can see, we've given absolutely everything. The boys are doing well. The amount of minutes some of the lads have played, it's nice to see a few of the boys getting back – obviously Thiago getting on today and showing his quality. We'll stick together, we'll keep plugging away and we just need to get that final piece of the puzzle right. Like I say, I thought it was a good performance tonight, we just needed that final bit to get the goals. If we keep playing like that, hopefully we can go on a run and put some more points on the board.

When you talk about it being so different for everyone this season, is it something that's stopping any team getting that sequence of results or do you still feel there is that potential to go on the sort of run you did last season?

I think it is, but everything is different. The protocols at the training ground are different, travelling to games is different, travelling on the day. Everything is completely different but it's the same in all walks of life at this moment in time. So that's something we have to adapt to. Whether that is stopping teams putting on a good run and being fully comfortable, I don't know. But that's where we are and we have to deal with it the best we can and push on. I think where we are in the league we would have liked to have got more points on the board. There's points we've dropped this season where we feel we could have done better but to still be in the mix going into the New Year is good, especially with the problems we have. But we are a quality squad of players who have been together a long time and we are used to winning. We are disappointed not to get the three points but we want to get back on the winning track as soon as possible.