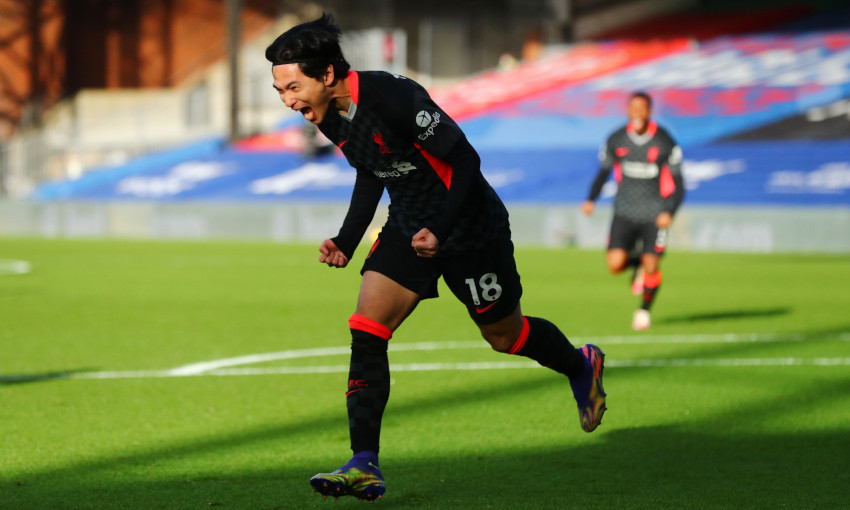 The Japan international opened his account in the English top flight for Liverpool – exactly a year after his signing from Red Bull Salzburg was announced – when he began the 7-0 rout of Crystal Palace.

Only 125 seconds had elapsed at Selhurst Park when Minamino’s deft touch inside the box from Sadio Mane’s lay-up created an angle to swipe a low drive back across the goalkeeper.

His subsequent celebration showed the delight and relief at ending that wait to net in the Premier League – and now the No.18 wants to use the breakthrough as a catalyst to score more regularly.

“It was instinctive,” Minamino told Liverpoolfc.com of the technique he used to fashion and finish the shooting opportunity against the Eagles.

“When Sadio passed the ball to me, I sensed that an opponent was coming to block me. But from there, I had no time to think, but just trusted my feeling and shot.

“A goal in the Premier League was what I really wanted to achieve. Rather than feeling happy about it, I think it took longer than I wished. But I am happy that I could contribute to the team’s victory.

“I wouldn’t say that I was disappointed with myself [for not scoring in the Premier League previously], but I always wanted to score as soon as possible. I also felt some pressure about it.

“I am happy that I finally scored, but I have only scored once, so I will work hard to score more.”

Liverpool went on to equal their biggest margin of victory under Jürgen Klopp as they added six more strikes without reply at Palace.

Braces from Roberto Firmino and Mohamed Salah were supplemented by Mane and Jordan Henderson efforts either side of half-time to ensure the champions lead the Premier League on Christmas Day for the third year in a row.

It was the most emphatic scoreline Minamino can recall being involved in during his career, but the forward again stressed his commitment to improvement when asked if it was a performance in which everything worked perfectly.

“I haven’t experienced such a big win since I became professional. So I am happy to contribute to such a special win,” he said.

“Because we could win that match by 7-0, I think our attacking [play] worked very well, and I myself was feeling it. Personally, throughout the game, [not] everything I did was working. I know there is a space for improvement.