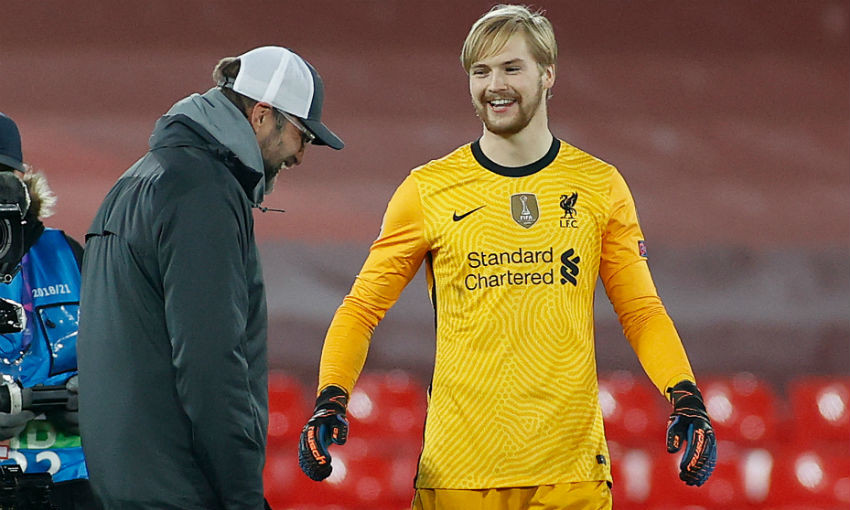 Caoimhin Kelleher felt it was the perfect night both on a personal and collective level after helping Liverpool beat AFC Ajax 1-0 in the Champions League on Tuesday night.

The Irish goalkeeper produced an eye-catching display on his European debut for the Reds to help them book their spot in the last 16 of the competition as Group D winners.

Curtis Jones' second-half finish decided the tie, though Kelleher preserved the vital clean sheet with a number of impressive saves throughout the Anfield contest.

Read on for Liverpoolfc.com's post-match chat with the 22-year-old...

Congratulations, can you tell us how you're feeling right now?

Just over the moon really with how the whole night went for me and for the whole team to get the win and to qualify. Just delighted.

When did you get an inkling that you would start this game tonight?

Coming into an important Champions League game like this, it's what you work so hard for...

I'm just working hard every day in training, preparing myself. I'm always thinking if a chance does come, I'll have to be ready for it. So that's why I work every day and thankfully all that work did pay off.

What did the first big save in the first half do for you confidence-wise?

Obviously it just kind of settles you in, I suppose. It gives you more confidence that you can make them and gave me confidence from there. Thankfully I was able to make a few others.

On the team's performance, the way you attacked the game, you probably could've won by more goals in the end...

We had a few chances there in the second half especially, I thought that we could've scored a few more. I think the main thing tonight was to get the win and qualify. There's so many games in this hectic schedule that we just need to do our best. We've qualified tonight, so that was the main objective.

Talk us through the big save at the end to deny Klaas-Jan Huntelaar...

Obviously I'm happy to do it, just to keep the team in it and get three points. That's what I'm there for and thankfully tonight I was able to help the team.

What did Alisson Becker say to you before the game? We also saw a big hug from Adrian prior to kick-off...

I didn't see Ali yesterday because I think he was gone, but I got a text before the game just to tell me good luck. Adrian was a really great support. He told me, 'I'm with you 100 per cent and supporting you no matter what.' To get that from him was really kind of him.

You were the first player the manager ran to after the game. That must've meant a lot...

Finally, if Alisson isn't ready for the weekend, you've staked your claim now...

That's all I can do. When I get my opportunity, I just need to take it. I think I've done well tonight, so hopefully I can push on and if I get another opportunity, just take it again.