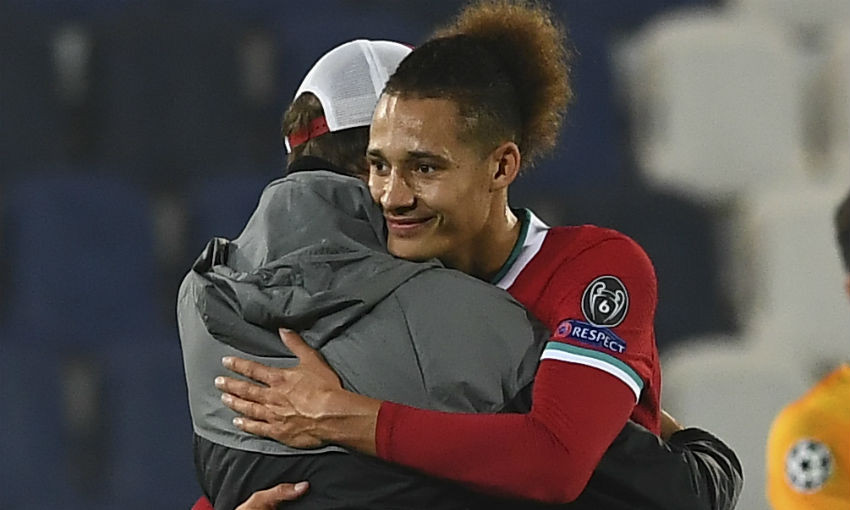 Rhys Williams is out to fulfil more of his dreams with the Liverpool first team after impressing in his first Champions League start for the club.

The centre-half was part of a sturdy backline that kept a free-scoring Atalanta BC side at bay in Italy on Tuesday as Diogo Jota netted a hat-trick and was joined on the scoresheet by Mohamed Salah and Sadio Mane in the 5-0 victory.

It was Williams' fifth appearance for Jürgen Klopp's side and the Academy product is looking to continue repaying the faith shown in him from the Reds boss.

Read on for Liverpoolfc.com's chat with the 19-year-old in the aftermath of the win in Bergamo...

What A Night! Full Champions League Debut, 5-0 Away Win And A Clean Sheet. Great Team Performance From Everyone💪🏾🔴… https://t.co/W1dyf5s6Vj

Rhys, congratulations, was that the best night of your life?

Yes, so far – and hopefully there’s many more to come. It doesn’t get much better than a 5-0 away win to Atalanta, so I’m over the moon really.

Can you tell us when you found out your big night was to come?

I’d say [Tuesday] I found out, that certified it. So I’ve just been trying to get myself into the zone all day and thankfully I’ve done that and it’s paid off.

The manager intimated before that you are not the nervous type, so did you sleep OK and was everything straightforward?

I tried to go asleep when we had a few hours before the game and it just wasn’t happening for me, so I just tried to chill out and watch a few films. I was always going to be a bit nervous but I thought I dealt with it quite well.

That was as passionate and hungry a performance we’ve seen for quite a while from this Liverpool team...

We had a point to prove. This team have scored a lot of goals at home, so we knew it was going to be a challenge to keep them out. But the lads up front deserve a lot of the credit as well. Every time we went forward we looked like scoring but me, Joe, Ali, the back four – the entire team really – just pulled together and kept them out.

What was the mindset before the game, just to keep things simple from your own point of view?

We knew we would have to defend well all game and we knew they were going to defend with a back three against our three, so it was going to be an end-to-end game at times. But I thought we controlled the game for large parts and every time we went forward we looked like scoring. Credit to Diogo, he put three in so you can’t get much better!

In terms of where it goes now, you set out as a team that you wanted to take charge of this group. Three wins from three puts you in a very strong position to qualify already…

The goal now is to get six from six, and we’ve had a clean sheet in all of the games, so hopefully we can get three more. That would be a real bonus and really kick us on for the knockout stages.

Speaking with you about a year ago now, you said how closely you had been watching Virgil van Dijk. Now you have come in and been in a position to help replace him, is that a situation you even dreamed of a year ago?

Well, I was hoping for an opportunity but I wasn’t hoping for it as good as this! I’m happy the boss trusts me and I’m going to keep repaying his faith with performances and nights like this, so hopefully I keep getting an opportunity and keep doing everyone proud.

Hopefully you’ve made it difficult for the manager to leave you out. That’s the next goal, isn’t it?

I want to become an irreplaceable piece of this side. It's a great team with great players. I know it’s going to be hard but I’m willing to put the effort in, keep working and hopefully keep putting in performances when I get the chance.