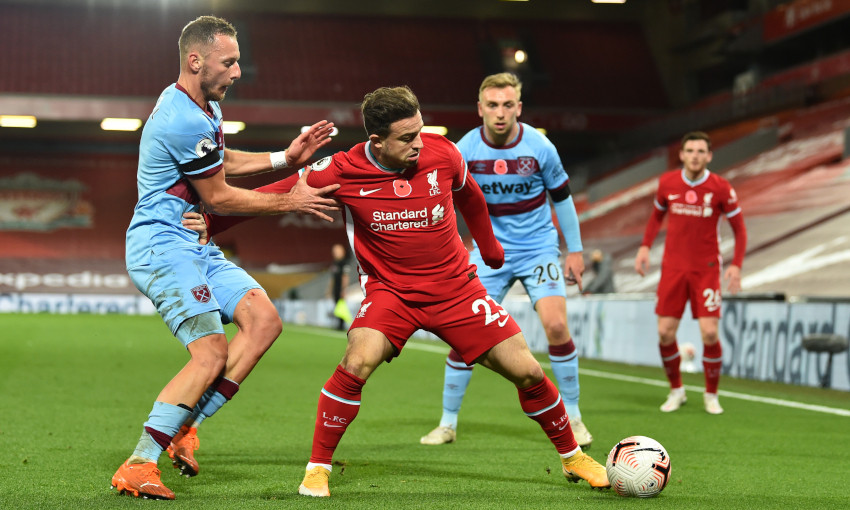 Atalanta 0-5 Liverpool: How it unfolded

Xherdan Shaqiri was delighted to make a significant impact off the bench in Liverpool's 2-1 victory at home to West Ham United on Saturday.

The No.23 was sent on alongside Diogo Jota with 20 minutes of the Premier League clash left to play and the Reds chasing a winner as the score remained level.

Jota was left to rue a VAR review when he thought his tap-in from a rebound had clinched the three points, but – with a helping hand from Shaqiri – the Portugal attacker was soon able to celebrate for real.

Shaqiri’s deft pass through a defender’s legs and into Jota inside the box allowed the latter to whip a finish into the net and send Liverpool top of the table.

“It was unbelievable. Of course, the subs always try to change the game and try to decide the games,” Shaqiri told Liverpoolfc.com post-match.

“And, of course, I’m a player and Diogo is also a player who can decide games and we needed that, so it was perfect.

“We both [played a part] in the second goal. It was a nice one and an important one, so we are very happy the three points stay here at Anfield.”

For the second week in succession, Jürgen Klopp’s team had to dig deep and produce a response to falling behind early on home soil.

Just as they had against Sheffield United the previous Saturday, they refused to give in and once again Jota was the match-winner at the Kop end – this time after Mohamed Salah levelled from the penalty spot.

The result means Liverpool equalled the all-time club record of 63 consecutive league matches unbeaten at Anfield, emulating the feat of Bob Paisley’s charges between 1978 and 1981.

“It was a tough game,” said Shaqiri. “We knew that West Ham would come here with a lot of confidence because they had good results against big teams in the past games.

“We saw that in the beginning and they went in front early but we kept going and [played] our game until the end. The football we played, we tried and at the end of the day it’s important to win the game and we did that.”

He added: “You have to believe until the end and in the end we scored a nice goal and the second one was in the football rules, so we are very happy.”

The Switzerland international made his fourth appearance of the season on Saturday and his first in the Premier League since July.

Shaqiri is pleased to be clocking up game time again and eager now to continue to be at Klopp’s disposal as much as possible as fixtures mount up.

“It’s always nice to be involved,” he said. “Obviously I was injured a few times and it was always the hard way for me until now. I’m very happy that I’ve got my minutes back, I’ve tried to stay fit and I hope it stays like this.”