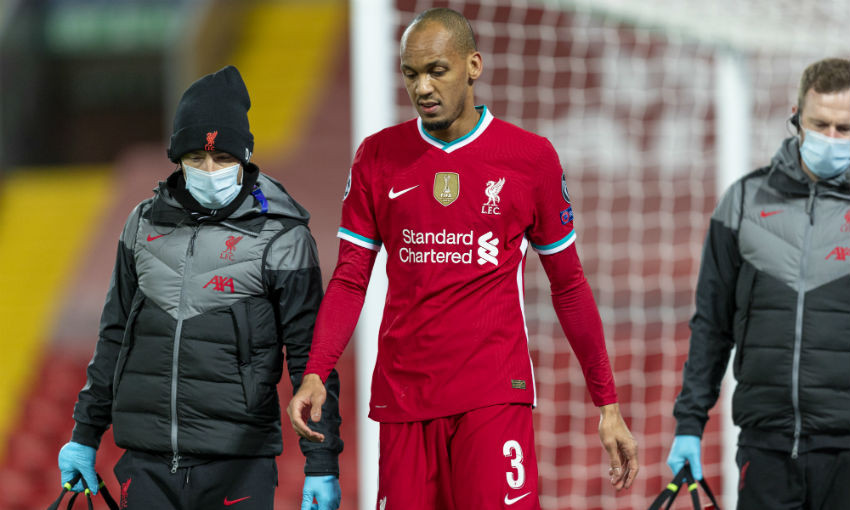 Liverpool are waiting to discover the extent of the injury Fabinho sustained during Tuesday's 2-0 win over FC Midtjylland.

The 27-year-old pulled up during the first half of the Champions League Group D tie and needed to be replaced by Rhys Williams after 29 minutes due to a muscle issue.

Jürgen Klopp explained in his post-match press conference: “Fab, I don’t know. Muscle injuries are like this, you get the result tomorrow morning probably, we have to wait for that.”

Meanwhile, Klopp explained the thinking behind the decision to replace Jordan Henderson with Georginio Wijnaldum at half-time, confirming the captain had not suffered an injury.

The boss said: “First, Hendo said at half-time he wants to play on. Before the game I’d decided already we have to share it – 45 and 45 – and all the rest would have been ridiculous.

“Hendo said at half-time, ‘No, boss, I can go on’ and then in these moments you have to be strong to yourself because I didn’t want to lose him, actually.

“We made the change, Gini did really well and for both I think it helped that they played only 45.”

On whether Joel Matip could return to the squad for Saturday’s Premier League fixture with West Ham United at Anfield, Klopp added: “I don’t know, we have to see.

“Look, if it would be only one game we play, if it was the last game of the season, I think we could make probably one or the other fit for one game – but we play three days later again and we need players again.

“The players who are now injured, we cannot use them on the first day of being fit again – or not injured anymore. They need a proper build-up for the rest of the season and that’s what we try.

“It is this juggle all the time between the fit players – how much can they play still? – and when we can use the others again?

“We are really interested in that fact so you can imagine we try everything to make everybody fit as quickly as possible.”