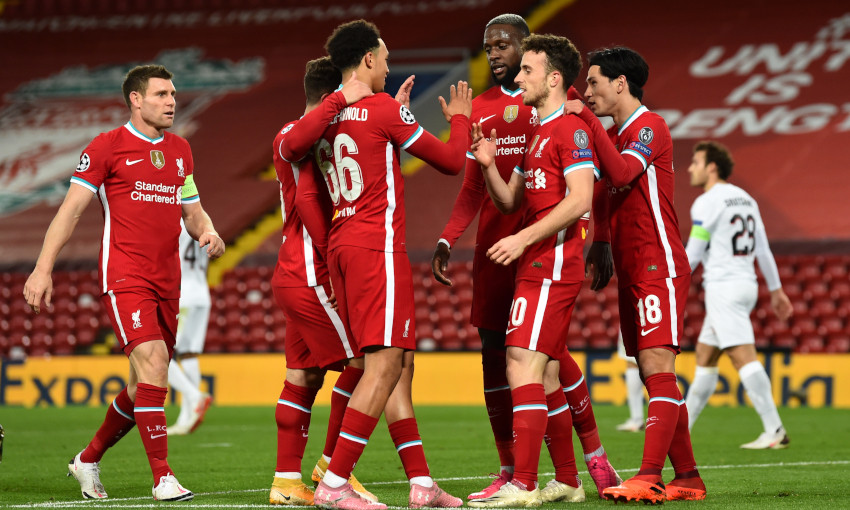 Liverpool rose to top spot in Champions League Group D with a hard-fought 2-0 win over FC Midtjylland at Anfield on Tuesday night.

After a first half mostly devoid of real goalscoring chances – and unfortunately punctuated by an injury to Fabinho – the hosts got in front early in the second.

Diogo Jota provided the finish at the end of a flowing move involving Trent Alexander-Arnold and Xherdan Shaqiri, with the Portuguese’s third goal for the Reds also the 10,000th in club history.

Mohamed Salah’s penalty finally clinched the points for Jürgen Klopp’s men in stoppage time, making it two wins from two in the section.

The result in L4, coupled with the 2-2 draw between Atalanta BC and AFC Ajax elsewhere in the group, means Liverpool now lead it by two points.

Klopp made four changes to his starting XI as James Milner, Takumi Minamino, Divock Origi and Shaqiri came into the side. 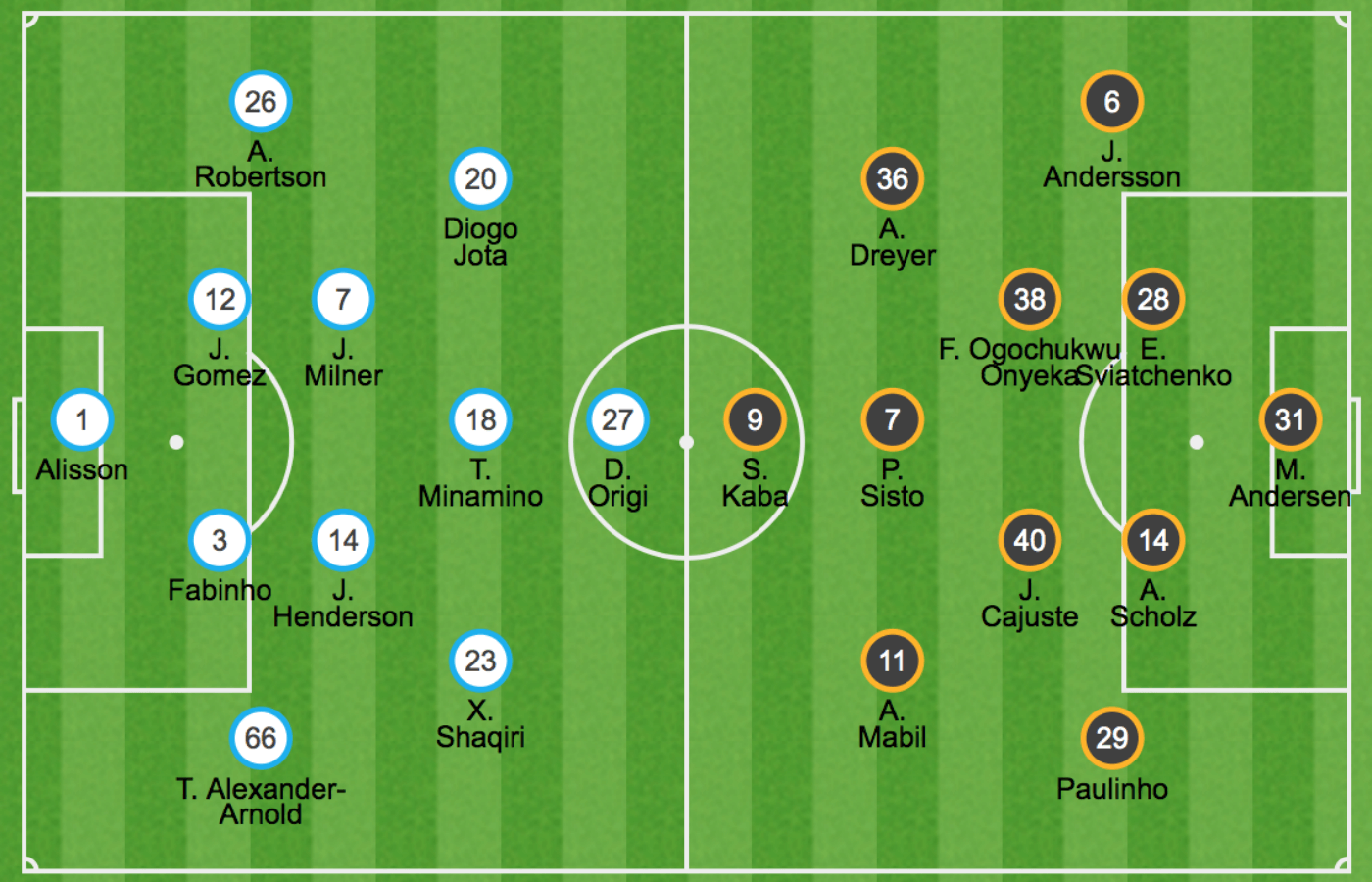 On a bitterly cold evening at Anfield, the sides emerged to the soundtrack of the inspirational Champions League anthem, though sadly without supporters present to witness their first-ever meeting.

Midtjylland created the tie’s opening chance in the third minute, when Anders Dreyer cutely arced his run to remain onside and collect a clipped pass in behind.

The winger carried the ball wide of goal to the left as Fabinho rushed to snuff out the danger, but Alisson Becker was still required to make a careful stop from the eventual low shot.

Liverpool’s attacks, by contrast, yielded little by way of similar opportunities in the initial 20 minutes of play, with Minamino unable to make contact when Alexander-Arnold did find a way through the opposition defence with a dangerous, whipped cross. 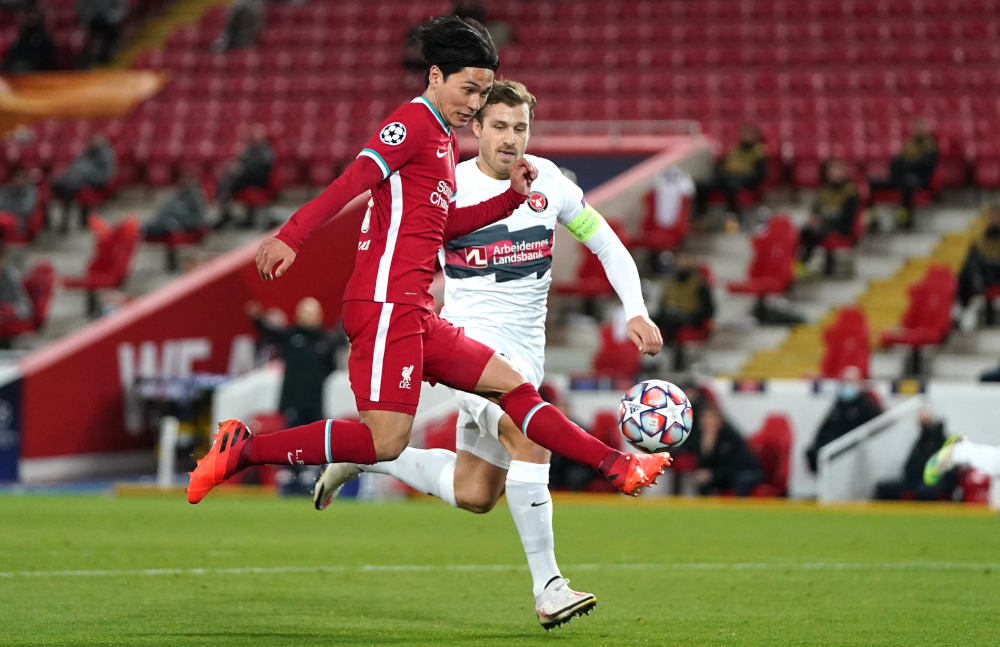 The hosts were then forced into a substitution before the half-hour mark as Fabinho pulled up with an injury and was unable to continue. On came 19-year-old Rhys Williams alongside Joe Gomez.

Klopp’s charges kept trying to establish some momentum – Jota firing off target when found by a corner kick and Milner seeing a strike inside the area blocked – but the Danish champions held firm relatively comfortably.

And the half came to a conclusion very much in stalemate.

Georginio Wijnaldum replaced Jordan Henderson in midfield when the teams came back out for the second period and the Reds got their breakthrough 10 minutes in.

It came via a passage of genuine quality as Alexander-Arnold moved in from the right flank, completed a one-two with Shaqiri – the latter’s reverse pass marrying with his follow-up run into the area – and clinically rolled the ball across the six-yard box for the waiting Jota to easily convert. 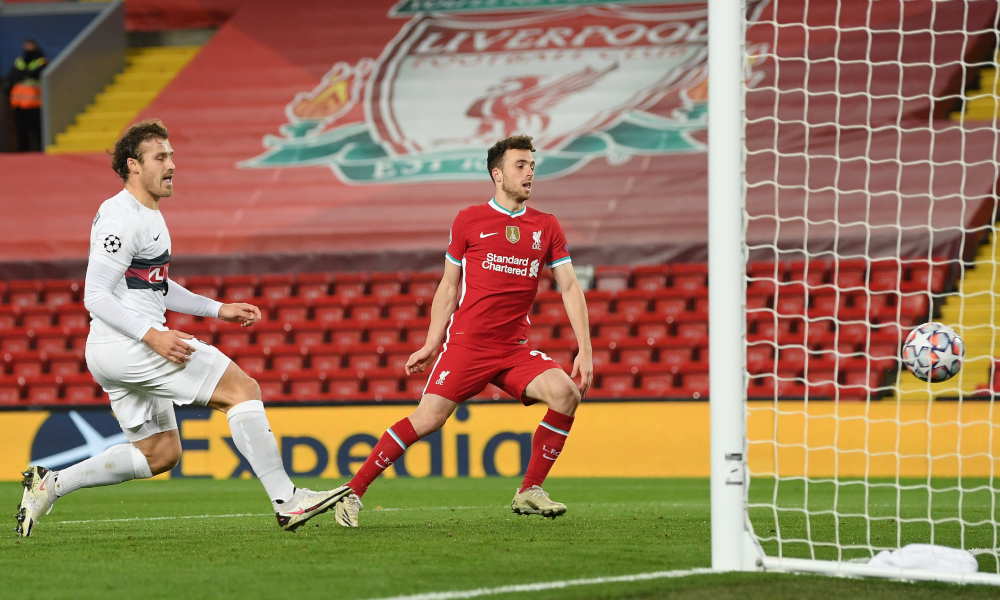 Klopp immediately sought to build on the lead by introducing Sadio Mane and Salah from the bench, the duo replacing Origi and Minamino in attack.

The visitors soon enjoyed a spell of persistent pressure, however, and fashioned a good chance to get level on the scoresheet with a quarter of an hour remaining.

Substitute Evander controlled an awkward delivery into the Liverpool box and maintained his balance as he shifted into a shooting position, but his effort towards the bottom left corner was wide of the target.

Roberto Firmino, on from the bench, could have put the game to bed two minutes from time when picked out unmarked in the area by Alexander-Arnold, only to guide his hit too high.

Midtjylland might have made the hosts pay in the final minute as Dreyer dribbled past Gomez and into a one-on-one with Alisson. His dinked attempt landed the wrong side of the right post, however.

And instead the Reds doubled their advantage in stoppage time, Salah fouled by Paulinho as he ran onto Alexander-Arnold’s through ball and stepping up to drive the spot-kick home and finally ensure three points.