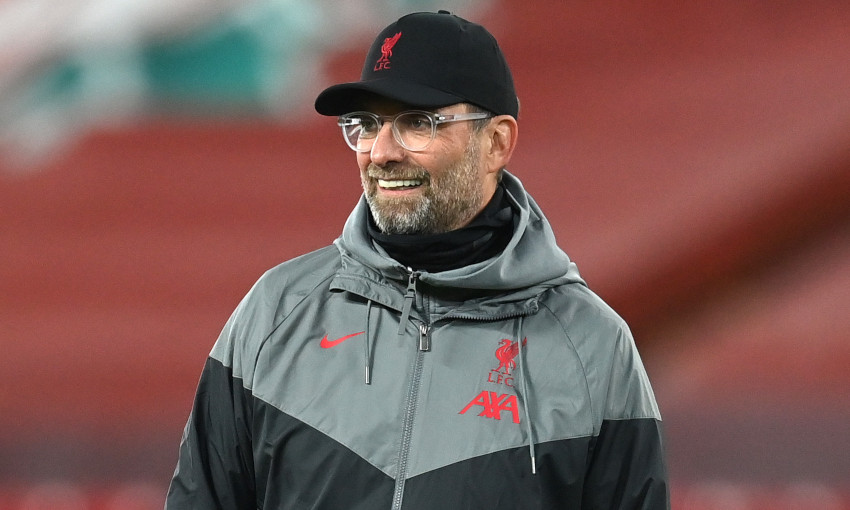 Jürgen Klopp reflected on a 'really tricky' game after Liverpool battled to defeat FC Midtjylland 2-0 in the Champions League on Tuesday night.

Following a goalless first half in which the Reds lost Fabinho to an injury that requires further assessment, Diogo Jota and substitute Mohamed Salah struck to secure three points at Anfield.

The result against the Danish title-holders moved Klopp’s men clear at the top of Group D, with two victories from their two ties played in the section.

At his post-match press conference, the manager analysed the difficulties his team faced on the evening, Rhys Williams’ performance off the bench and more.

On how difficult the game proved to be…

Pretty much as difficult as I expected, to be honest, for different reasons. We made a lot of changes and it’s my job to decide obviously, I have all the information of what the boys did. But for different reasons again, the game was really tricky. They pressed like crazy, they made a really hectic game of it and we couldn’t calm it down in the decisive moments. But actually the individual performances, for not playing that long, like Div didn’t play for a while, that was absolutely OK. Shaq didn’t play for a longer period, absolutely really good – 90 minutes, incredible. Taki, very lively but obviously not exactly in the game. These kind of things, that was OK but, of course, you saw, when a team defends like them then you need your patterns and we didn’t show them tonight. That doesn’t help.

But we scored a goal anyway in probably the best football moment where we really passed through exactly like we should have. They had really big chances – two or three – Ali was there, all these kind of things. That helps obviously. Then, you just have to fight and that’s what we did. It’s like in a marriage, it’s in good and in lesser good times, you have to stick together. That’s the moment. It’s just a tricky one; a lot of games, player after player says goodbye for a while [with injury] and then we still have to play the next game, and in our case we have to win it. We try with all we have and I’m really happy with that. And all the rest will come again.

He did really well. The only problem we have now is unfortunately we have four days to the West Ham game and you will make every day a story of him and then he has to prove he can deal with that as well because before everything was calm around him. We try to do that as well. He’s a talent, he plays for England U20s, he’s 19 years old. I didn’t tell any news when I said he has more Champions League minutes than Premier League minutes because he didn’t play Premier League yet and has now two Champions League appearances. Won both games on top of that, which is pretty exceptional. He did well, everything looks promising.

Apart from Rhys, we still have Nat Phillips, who for the reason that we thought he might make a transfer to another club, he is not in the Champions League squad, which is strange. But he is a centre-half as well. Billy [Koumetio] the kid, I’m not sure if he can train now tomorrow or not but he will be back in training. So, we have very young and inexperienced alternatives, and in the moment it looks like we have to choose one of them. I don’t know yet. But to be really clear and positive, Rhys was not in one situation tonight our problem, he played a really good game.

The line-up we chose was [that] we wanted to show the respect we have for Midtjylland because we needed fresh legs desperately. You saw we needed each fresh leg we could get and with the five possible changes we could then finish the game off.

On whether anything about the visitors’ performance surprised him…

No, actually not at all. Again, with the five changes I think it’s then easier to keep it up for 90 minutes; I don’t think they have to play this kind of pressing over 90 minutes in Denmark a lot. But they did it tonight. I think Midtjylland wanted to prove a point tonight – and they did probably – that they can be a really uncomfortable opponent. That’s what they were tonight. For us the challenge was to deal with the pressing. The high press was not too much a problem but then finding solutions in the middle… how I said, my fault because of a lot of changes. We were not patient enough, we didn’t pass quick enough, all these kind of things, football things. But they forced us to. They had three really big chances. So, no, not surprised at all. I know that’s how football can be. What I said last night, you are not a small team. If people think you are a small team, in the game you can show how big you are and that’s what Midtjylland did tonight. I hope everybody saw it. Really, respect.